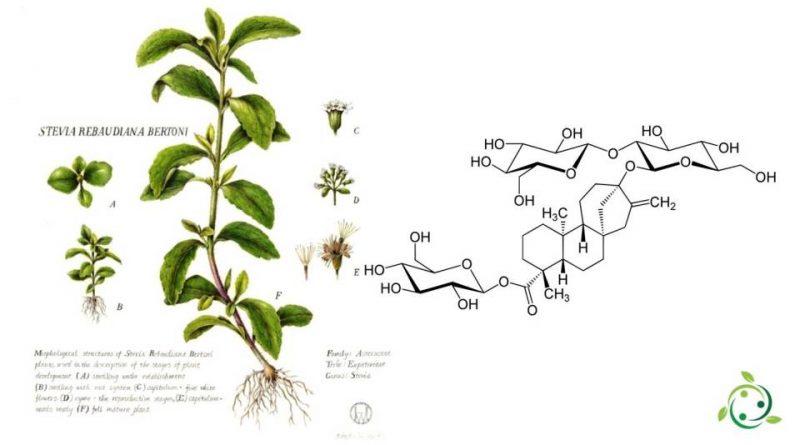 Stevioside, whose term in the official IUPAC nomenclature is: beta-D-glucopyranosyl- (1R, 4aS, 7S, 8aR, 10aS) -7- (2-O- (beta-D-glucopyranosyl) alpha-D-glucopyranosiloxy) 1,4a-dimethyl-12-methyleneperhydro 7,8a-ethanophenantren-1-carboxylate, is a compound present in the leaves of the Stevia plant (Stevia rebaudiana Bertoni).
Stevioside or Stevia sugar has a brute or molecular formula: C38H60O18.
Stevia was discovered in 1931 by two French chemists who succeeded in isolating two sweetening compounds from Stevia leaves, which were called stevioside and rebaudioside. Years later, the Japanese realized the usefulness of stevioside as a sweetener in place of sucrose and its artificial alternatives.
This substance is responsible for the sweet taste of the leaves, a use for which the plant is used as a sweetener by the native Central and South American populations.
The sweetening power of stevioside is about 300 times that of sucrose, and is used in Japan and Europe as a sweetener for diet sodas, as it has zero calories and no glycemic index.
Stevioside is not suitable for industrial use in food manufacturing in the United States as it is not permitted by law.
The stevioside molecule contains three β-glucoses, which in some in vitro studies are hydrolyzed and removed by the human intestinal flora, producing steviol.
Although stevioside, like its metabolite steviol, is a recognized mutagenic agent, according to some studies, it does not show carcinogenic effects on its own; it is also unclear whether this metabolite is actually absorbed during the in vivo metabolism of stevioside.

Furthermore, from statistical studies carried out among populations that use stevia leaves and derivatives, including Japan, there is no marked statistical evidence of tumors attributable to steviol. This consideration is also confirmed by the Berkeley University study in vivo.
Some research has shown that stevioside reduces blood sugar by stimulating the production of insulin, confirming its usefulness in the treatment of diabetes, a purpose for which stevia has been used for centuries in Paraguay.
In fact, beyond the high sweetening power, a fundamental characteristic of Stevia is that the glycosides contained in it are not absorbed and as such have no significant effect on glycemic levels. In the intestine, however, colon bacteria can degrade stevioside to steviol, which is readily absorbed by the enteric wall, inactivated by the liver, and immediately excreted in the urine.