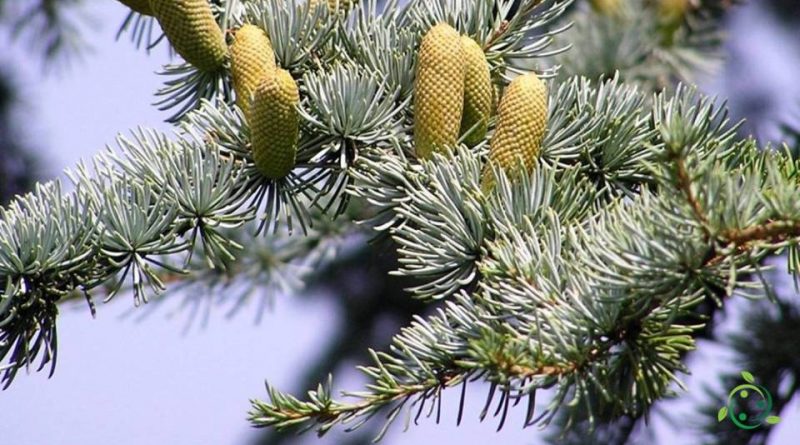 How the Atlas Cedar is grown

The Atlas cedar or silver cedar (Cedrus atlantica (Endl.) Manetti ex Carrière, 1855) is a tree of the Pinaceae family whose name derives from its origin and diffusion in the Atlas range in North Africa.
This plant is native to Morocco and Algeria and very widespread in the Atlas Mountains, where it is found in the cooler slopes to the north from 1,500 to 2,200 meters.
Cedrus atlantica was introduced in Europe in the mid-nineteenth century, where it is often found in parks, especially in the glaucous variety, very ornamental.
Its reproductive structures are cones that appear in autumn: the male ones, first yellowish and then brown, are 3-4 centimeters long, erect and fall after releasing the pollen; the female ones, just over a centimeter long and greenish in color, take two years to transform into brown, barrel-shaped, erect pine cones that disintegrate when ripe.
However, the plant bears fruit at the age of about 30.

Cultivation –
The Atlas cedar is a plant of easy adaptability but which for a harmonious growth needs a good deep soil, with a slightly alkaline pH, on average fertile.
The plant can be propagated by seed or by purchasing it in specialized nurseries.
In the first years after planting, whether it comes from a seedbed or from a purchased seedling, it is good to help the young seedlings with irrigation starting from the spring period up to the autumn period, especially in the event of prolonged periods of drought. For the rest they are plants with modest needs.
Furthermore, the Cedrus atlantica is a plant that once established becomes very resistant to both drought, heat, but also intense frost, withstanding minimum temperatures down to -25 ° C, and even prolonged.
They also adapt to very rainy climates but do not like heavy and humid soils, which can lead to root asphyxiation and plant death.
It should also be remembered that once this plant takes root, within a few years it becomes a majestic tree.

Pruning –
The pruning technique should not be performed on young plants except to remove damaged or broken branches; in fact, as it happens for many conifers, it is not advisable to intervene on plants now formed only to slow down their growth; in this plant, as soon as the apex is cut, one of the underlying branches develops rapidly to replace the pruned apex, causing a large growth of the plant, in the attempt to quickly restore the lost foliage.
For this reason, pruning should be limited to any spring cleaning, to remove broken or weathered branches.

Uses –
Like the other species of Cedar, the Atlas Cedar provides a valuable wood, which is durable and fragrant and is used for construction, furniture, sculpture and cabinet making; the plants are grown for ornamentation especially in the “glauca” variety with silver-gray leaves.