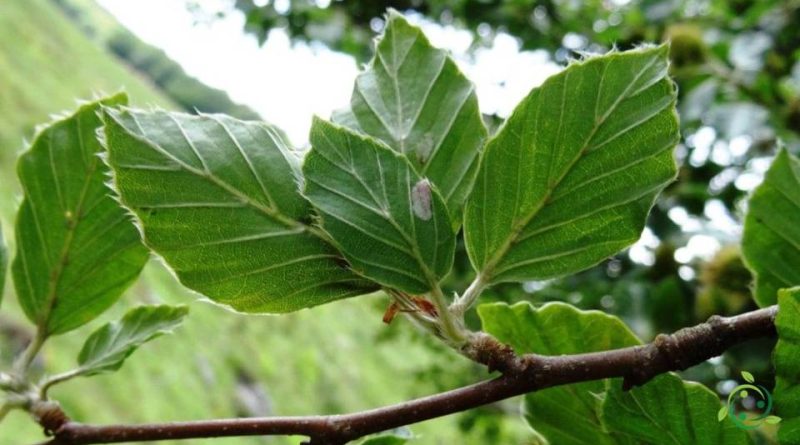 The beech (Fagus sylvatica L., 1753) is a tree of the Fagaceae family widespread in Europe from southern Sweden to the mountains of Sicily and Great Britain to south-eastern Russia.

Suitable breeding habitat –
Fagus sylvatica is a plant whose natural distribution of the species goes from southern Sweden (with sparser populations in Norway) in the north to southern Italy, Sicily and the Iberian Peninsula in the south, while in the east it extends to northern Turkey. -western where it overlaps with that of Fagus orientalis.
This plant, although often considered native to southern England, recent evidence suggests that Fagus sylvatica did not arrive in England until about 4000 BC, or 2,000 years after the formation of the English Channel after the ice ages; it may have been an early introduction by Stone Age humans, who used nuts as food.
The natural habitat of this plant, although not demanding for the type of soil, is that of humid environments (well-distributed rainfall throughout the year and frequent fogs) and well-drained soils (it does not tolerate excessive stagnation of water) . It prefers moderately fertile, calcified or slightly acid soils, therefore it is more often found on the side of a hill than on the bottom of a clayey basin. It tolerates harsh winter cold, but is sensitive to spring frosts. In Norway’s oceanic climate, planted trees grow well north of Bodø, produce seedlings and can spread naturally to Trondheim. In Sweden, beech trees do not grow in the north like in Norway.

Propagation –
Beech is a very cold hardy tree, tolerating temperatures down to around -25 ° C when in a dormant state.
It grows well on light to medium soils, doing well on chalk, but not very suitable for heavy and moist soil.
The now established trees tolerate drought and are very tolerant to winds but not to brackish ones.
These are slow growing trees and can also be very slow to establish after transplanting. However, in good conditions they are capable of growing up to one meter in one year.
The propagation of this plant occurs by seed.
Remember that the seed has a short vitality so it is better to sow it as soon as it is ripe, in the autumn period, taking care, where present, to protect it from mice.
Germination occurs in spring.
The seedlings are then placed in single pots, grown in a protected environment for the first winter and transplanted the following year in spring or early summer, in any case after the last foreseen frosts. The seedlings are slow growing for the first few years and are very susceptible to damage from late frosts.
The seed can also be sown in an outdoor seedbed in autumn.
Seedlings can be left in the open ground for three years before transplanting, but it is best if placed in their final positions as soon as possible and with some protection from spring frosts.

Ecology –
In nature, the sustainability of beech forests is guaranteed by a balance between the use of forest resources and the conservation of habitat and biodiversity. Beech is a renewable raw material within an optimal habitat. The FAGUS project which is part of the LIFE program defines the ideal habitat for the conservation of beech woods. The anthropization of forests can be balanced by maintaining biodiversity and the heterogeneity of the structure over time. The habitat of Apennine beech forests in an optimal state includes yew, holly and silver fir. This composition is rare today and homogeneous structures predominate, there are few tree species other than beech.
In Italy the Piedmont Region, second after Abruzzo for extension of Apennine beech forests, in 2012 defined a sustainability plan applicable to the territory. The study of beech forests and their characteristics has established diversified intervention projects for the conservation of specific habitats. There are three ways to cultivate beech woods: in coppice, or by cutting the beech trees to allow the renewal of the habitat with reproduction by suckers; high forest, letting the trees grow up to their maximum height. The cultivation adopted depends on the specificity of the beech forest and the use of timber. For example, forest cultivation for wood processing is considered. The high forest cultivation in Piedmont is not very widespread while in Calabria, Campania and Abruzzo it is more practiced. The cultivation in coppice allows to obtain wood for combustion.
Since 1994 the FSC (Forest Stewardship Council) has been dealing with sustainable management of forests that offer raw materials to the production system. In 2001, the Italian FSC was born, which monitors and certifies the use of the forests of the national territory, guaranteeing the sustainability of the wood-paper supply chain to protect and maintain the optimal conditions of the specific habitats.
It should also be remembered that Fagus sylvatica forms ectomicorrhiza with a series of fungi including many species of Russula, in addition to Laccaria amethystina, and with the species Ramaria flavosaponaria. Tomentella Pat. species and Cenococcum geophilum have been found in Danish and Spanish beech forests. These fungi are important for improving the absorption of water and nutrients from the soil.