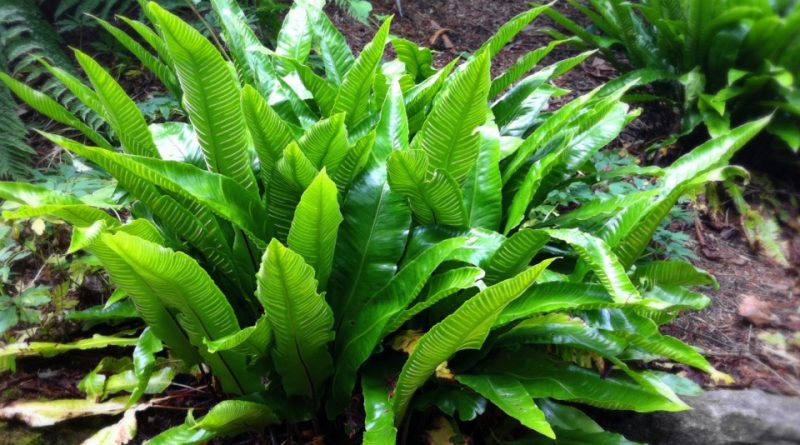 Etymology –
The term Asplenium comes from the Greek ἀσπλήνος asplénos, a fern mentioned by Dioscorides (from the privative prefix α- a- and from σπλήν, ηνόϛ splén, enós spleen): a plant considered capable of curing disorders of the spleen.
The specific epithet scolopendrium comes from the Greek σκολόπενδρα scolόpendra scolopendra, millipede (from σκόλοψ scólops sting, ἐν en nel and ἕδρα hédra behind), arthropod equipped with a sting: for the sori arranged in elongated lines that recall.

Geographic Distribution and Habitat –
The Hart’s Tongue Fern is a plant with wide distribution in most of the temperate zones of Eurasia, North Africa – from Morocco to Libya – and eastern North America.
Its habitat is that of wet banks and walls, of rocks in shady humid places in the woods, up to 1000 m and often on soils rich in limestone. 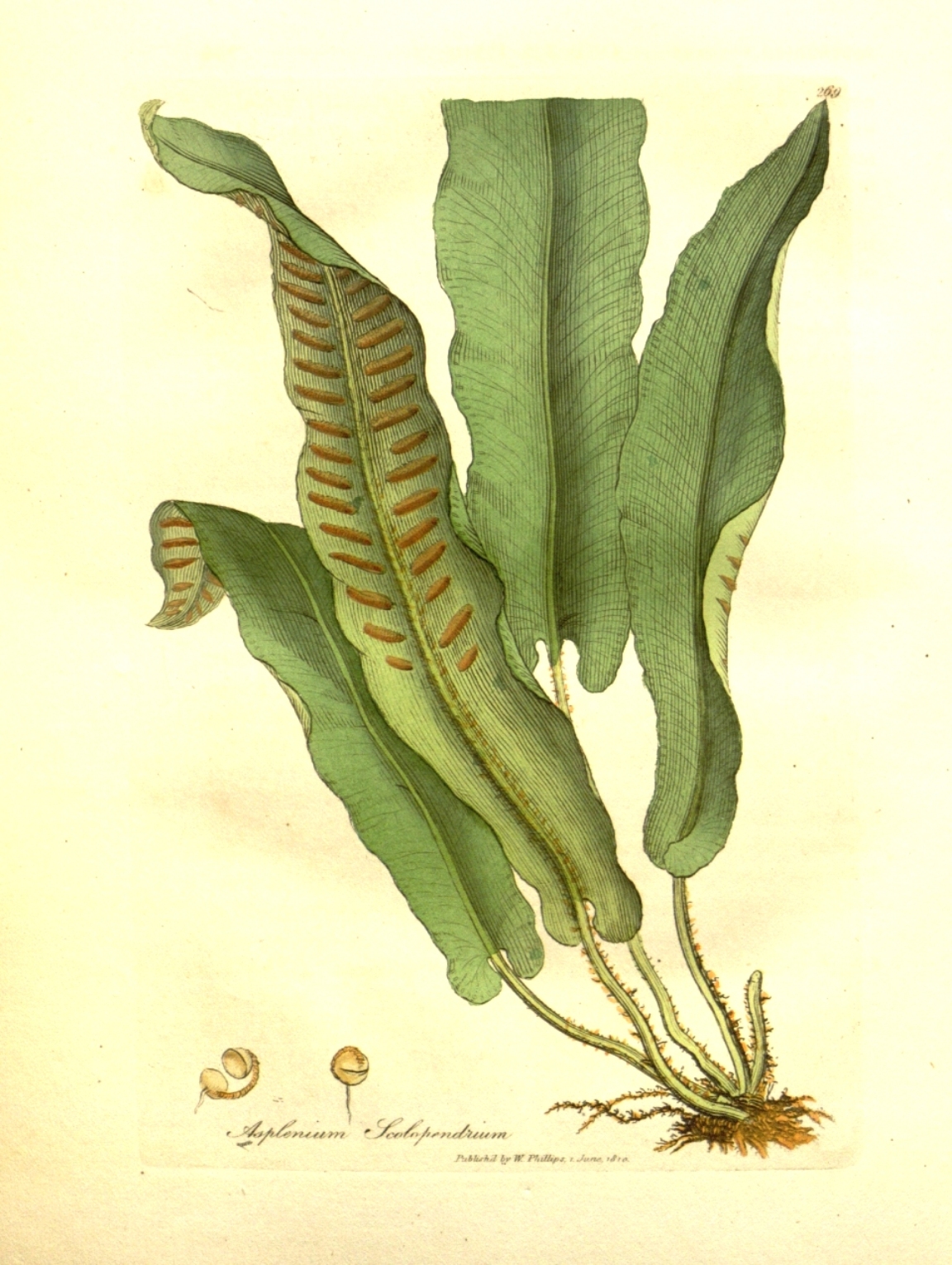 Description –
Phyllitis scolopendrium is a perennial fern.
It has a short, broad and erect rhizome, up to 80 cm (-100) high.
The stipe is paleaceaus red-brown in color, robust, generally very short or at most half the length of the lamina long (10-20 cm) and covered by a dense layer of scales composed of scariose laciniae.
The leathery lamina, shiny green in the upper part (4×5 x 15-60cm) with an entire or crenate toothed and wavy margin, with a corded base and a more or less acute apex.
The sori are ocher, placed on the lower page, arranged on 2×20 mm (-30) oblique lines, of unequal size, always twinned and inserted on the external secondary venules.
Lateral, linear and bivalve indusium.
The spores are (24) 27-30 (33) cm in diameter, ovoid, light brown, with reticulated and warty perisporium.

Cultivation –
Phyllitis scolopendrium is a very ornamental evergreen fern with no particular needs but suitable for alkaline soils.
The plant is harvested in some areas in its natural state for local use as a medicine and hair conditioner but is also grown as an ornamental, creating good ground cover in the shade of the woods.
The plants resist up to temperatures of about -30 ° C and are easily cultivated in a shady position in humus-rich and well-drained soils. They prefer a light sandy soil, preferably on calcareous soils rich in humus; it requires a pH greater than 6 to grow well.
Plants can be grown on dry stone walls but prefer a shady location with no more than 3 hours of sun per day, more exposure will cause yellowing or even drying of the leaves.
In general, however, it is a very adaptable plant and there are varieties selected for their ornamental value.
The propagation takes place through spores that must be sown, possibly, as soon as they are ripe on the surface of a sterilized soil rich in humus. After sowing it is recommended to keep the compost moist, preferably by placing a plastic bag over the seedbed or pot. The spores usually germinate in the spring. The spores sown in spring germinate in 1 – 3 months at 15 ° C.
Once the plants are 15cm or more tall, they can be transplanted into their permanent locations in the spring.
The plant can also be multiplied by division, in the spring period.
For this technique it is advisable to dig around the plant by removing the soil until the old caudex, covered with “dead” leaf bases, becomes visible.
At this point these bases can be removed individually by detaching them from the caudex. At the attachment point they will be green. Young plants can be bred by planting these leaf bases, green-tipped up, in a pot of soil and enclosing the pot in a plastic bag. Within a month, green bulges will appear around the original attachment point to the caudex, each of which will develop quite quickly and generate a young fern. It takes about 3 months in the summer and even longer in the winter.

Customs and Traditions –
Phyllitis scolopendrium is a plant known by various names.
Please note that although no reports of toxicity have been found for this species, some ferns contain carcinogenic substances, so some caution is advisable.
Many ferns also contain thiaminase, an enzyme that deprives the body of its B vitamin complex. In small amounts this enzyme will not harm people on an adequate diet rich in B vitamins, although large amounts can cause serious health problems. The enzyme is destroyed by heat or complete drying, so cooking the plant will remove the thiaminase.
The plant was used for medicinal use: the fronds are astringent, cholagogue, diaphoretic, diuretic, expectorant, vulnerary.
An infusion is prepared which is taken to treat diarrhea, dysentery, gravelly bladder deposits, and to remove obstructions in the liver and spleen.
Externally it is used as an ointment in the treatment of hemorrhoids, burns and sunburns.
Among other uses, this plant can be used as a good ground cover plant for shady locations, as long as it is planted no more than 30cm apart.
The plants form a clump that spreads slowly.

Preparation Method –
Phyllitis scolopendrium is a plant that, with the indicated precautions, is used for medicinal purposes.
The fronds are harvested during the summer and can be dried for later use; with these, infusions are prepared for the treatment of diarrhea, dysentery, gravelly deposits of the bladder and to remove obstructions of the liver and spleen.
The plant can be used externally as an ointment in the treatment of hemorrhoids, burns and sunburn.
Among other uses, a decoction can be prepared, always from the fronds, which is used cosmetically as a shower gel to combat oily skin and also as a face pack for delicate skin.

One thought on “Phyllitis scolopendrium”