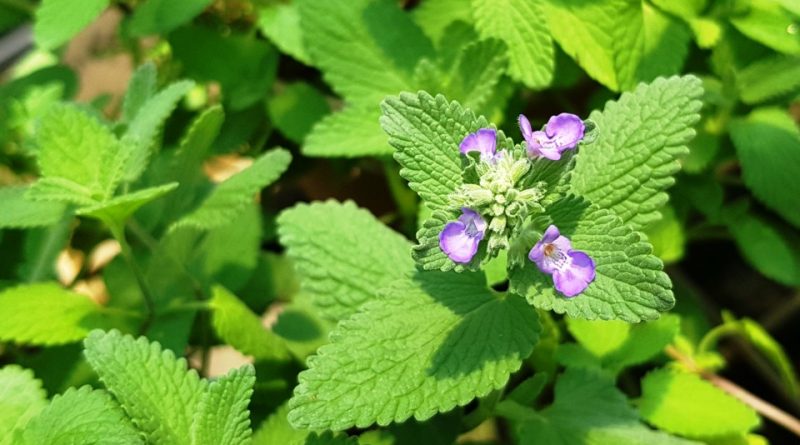 The Catnip or catswort or catwort or catmint (Nepeta cataria L., 1753) is a herbaceous species belonging to the Lamiaceae family.

Etymology –
The term Nepeta comes from nepeta, the name of a plant mentioned by Pliny, perhaps because it comes from Nepi, in Etruria.
The specific catarian epithet comes from the Greek katta gatta: cats (who are attracted to it), cat man.

Geographic Distribution and Habitat –
The Catnip is a plant present in an area that includes Europe, including Great Britain, from southern and eastern Scandanavia to Spain, Asia, including China and Japan, up to the Himalayas; it is also present in Africa and North America.
In Italy it is an almost rare species but is found throughout the territory (excluding Sardinia). In the Alps it is present both on the southern and northern sides. On the other European reliefs connected to the Alps it is found in the Black Forest, Vosges, Jura Massif, Central Massif, Pyrenees, Balkan Mountains and Carpathians.
Its typical habitat is rubble and old walls. In Europe it is present spontaneously as a relic of ancient crops; it grows in uncultivated grounds and among ruins, along hedges and roads. The preferred substrate is calcareous but also siliceous with neutral pH, high nutritional values ​​of the soil that must be dry.
From the altitudinal point of view it is present on the reliefs up to 1200 m s.l.m. but it can be found up to 2500 m a.s.l. in China. 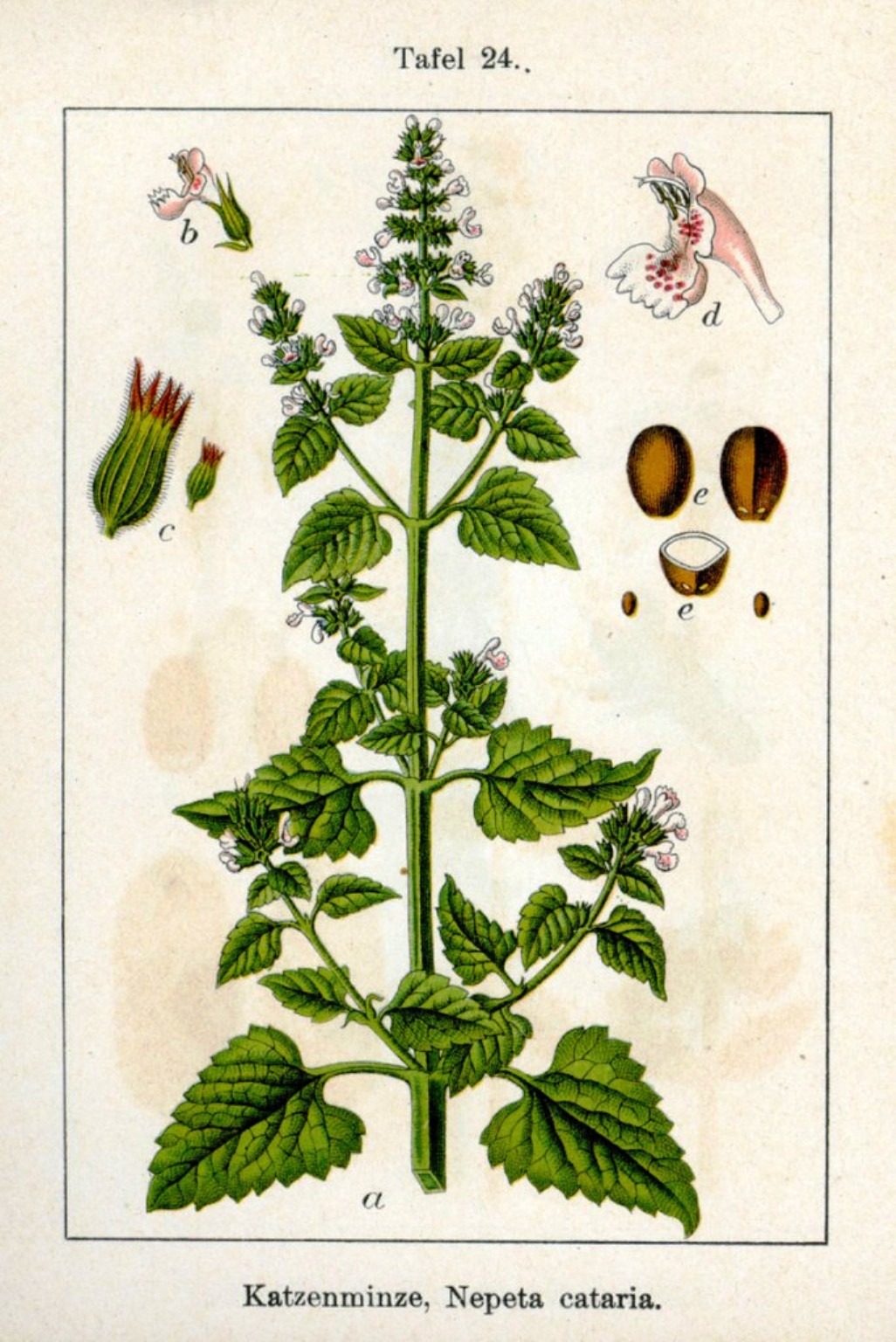 Description –
Nepeta cataria is a short-lived herbaceous perennial plant with a height of up to 50-100 cm in height.
It is a plant very similar to other species of its family (such as mint) with brown-green leaves with the characteristic square stem. The leaves are toothed and are triangular to elliptical in shape.
The flowers are small bilabiate, fragrant and pink or white with thin pale purple spots.
The plant blooms from spring until late summer and sometimes until autumn.
The fruit is a microbasarium with mericarps (nucule) of 1.1-1.7 x 0.6-1 mm, smooth, hairless or with short hairs at the apex, of a brown color.

Cultivation –
Nepeta cataria is a plant that occurs spontaneously but can be grown easily especially in sandy or light soils in a sunny position. It can be grown in heavier soils but only if they have good drainage.
The plants are resistant to about -25 ° C.
Plants can be cut back during flowering for a second leaf crop.
It is a useful plant in horticultural consociations as it seems to repel various parasites of cabbage, some aphids and other insects.
The flowers, on the other hand, are very attractive to bees.
The plant can be propagated by seed; sowing should be done as soon as the seed is ripe, in the autumn period, taking care to protect the young plants from the cold.
On the other hand, the germination of seeds sown in spring can be irregular. It is recommended to place the seedlings in individual pots when they are large enough to handle and to transplant them to their permanent locations in the summer. The seed remains viable for about 5 years.
However, sowing can be carried out directly in the open field. It is a fast growing plant, seedlings can reach flowering size in their first year.
Propagation can also be carried out by division of tufts. In this case, the small tufts must be made to grow in order to be able to transplant them when they are larger; larger tufts can be planted directly.
Finally, basal cuttings can be prepared in the period of late spring or early summer.

Customs and Traditions –
Nepeta cataria is a plant which, according to popular medicine, has long been used as an antispasmodic, stimulant and against contractures; in insomnia, stress, menstrual and intestinal cramps; the effects, however, are mild; it is smoked by some as a euphoric (does not contain addictive alkaloids).
The plant has edible uses and the raw young leaves are consumed; they taste like mint, make an aromatic dressing in salads. Older leaves are used as a condiment in cooked foods.
The leaves can be used fresh or dried to make an aromatic herbal tea.
A tea made with these should be infused in a closed container to preserve the essential oils, boiling it is said to spoil it.
In its medicinal use, however, its pleasant taste and delicate action make it suitable for treating colds, flu and fevers in children. It is most effective when used in combination with the elderflower (Sambucus nigra).
The infusion causes sweat and is considered useful in the treatment of fevers and colds. It is also very useful in the treatment of restlessness and nervousness, being very useful as a mild sedative for children.
The infusion is also applied externally to bruises, in particular for tired and sunken eyes.
The plant is said to be repulsive to some insects, as well as ants and even rats and mice.
In fact, a concentrated infusion can be used to repel fleas from carpets or animal fur.
An extract of the leaves has herbicidal and insect repellent properties.
The freshly harvested flowering tops contain 0.3 – 1% of essential oil, obtained by distillation. This is mainly used for medicinal purposes.
The plant (in the leaves, stems and roots) contains nepetalactone, a terpene which is an analogue of cat pheromones, and therefore carries out a neuroactive activity against it. About two thirds of cats are susceptible to the effects of catnip (sensitivity is inherited genetically). Sensitivity is more pronounced in young individuals. Other large cats, such as tigers or leopards, also have similar sensitivity to grass, while lions seem to show indifference.
Among other uses, it should be remembered that in some cases it is cultivated as an ornamental plant, specifically and in some associations for its repellent capacity for insects.

Preparation Method –
Nepeta cataria is a plant which uses both the leaves and the flowering stems that are harvested in August when the plant is in full bloom; are dried and stored for use as needed.
The dried leaves retain their fragrance and can be used in potpourri.
In edible use, raw young leaves are consumed as an aromatic condiment in salads. Older leaves are used as a condiment in cooked foods.
The leaves can be used fresh or dried to prepare an aromatic herbal tea.
A tea made with these should be infused in a closed container to preserve the essential oils, boiling it is said to spoil it.