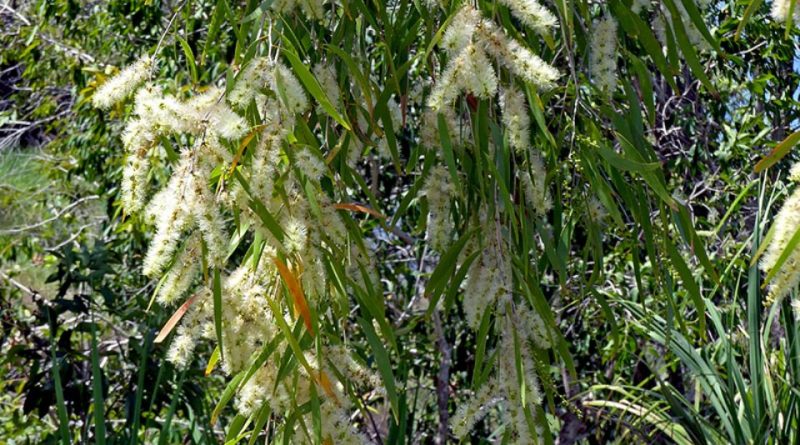 The weeping paperbark or long-leaved paperbark or white paperbark (Melaleuca leucadendra (L.) L.) is an arboreal species belonging to the Myrtaceae family.

Etymology –
The term Melaleuca comes from the Greek μέλας mélas black and from λευκός leucós white; on this name, used by Linnaeus, William Jackson Hooker writes: “μέλας, black, and λευκός, white; the same as Caja-puti, or white tree, the Malay name of the original species and therefore also called Leucadendron and Arbor alba . ”
The specific epithet leucadendra derives from the ancient Greek words λευκός (leukós) which means “white” and δένδρον (déndron) which means “tree” which refers to the white bark of this plant. [

Geographic Distribution and Habitat –
Melaleuca leucadendra is a widespread plant in northern Australia and Queensland up to Shoalwater Bay, in Southeast Asia, in New Guinea and in the islands of the Torres Strait and Indonesia.
Its habitat is that of forests near the edges of rivers and streams on a wide range of soils, mainly on flat or very gentle topography, especially river plains, coastal plains or seasonal swamps, at altitudes up to 800 meters. 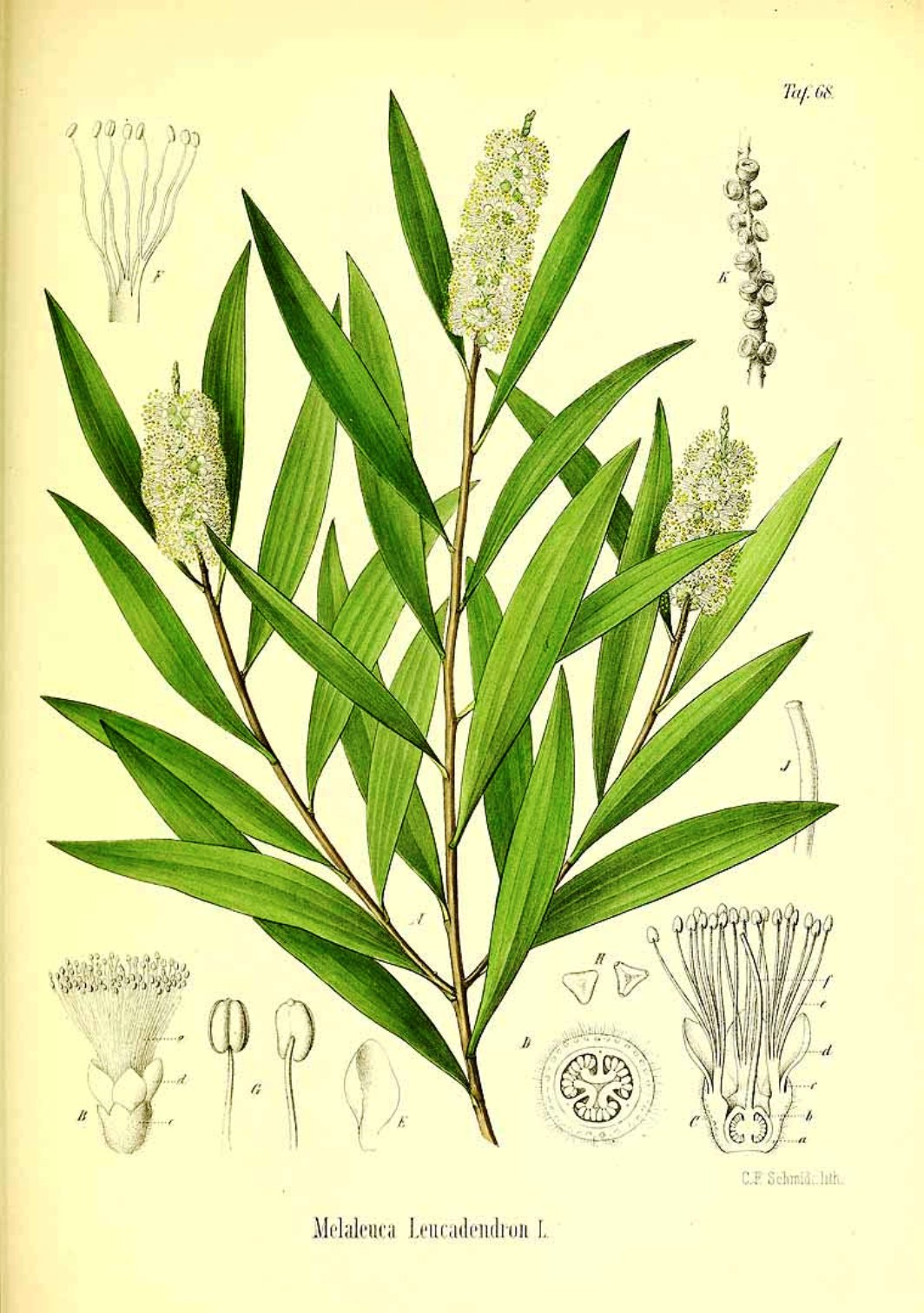 Description –
Melaleuca leucadendra is an evergreen tree that can grow up to about 20 meters and even more, with a trunk covered with a thick, white and papery bark and thinner, weeping branches.
Its leaves and young branches are covered with fine, short, white hairs when young, but become hairless when they mature. The leaves are arranged alternately, 75-270 mm long and 6.5-40 mm wide, flat, narrow egg-shaped or lance-shaped and tapering to a point. The leaves have 5 (sometimes up to 9) longitudinal ribs and are often curved or sickle-shaped.
The flowers are cream, white or greenish-white and are arranged in spikes at the ends of the branches that continue to grow after flowering, sometimes on the sides of the branches or at the upper axil of the leaves. Each spike has a diameter of up to 35 mm, a length of up to 80 mm and contains between 7 and 22 groups of flowers in three. The petals are 3-4 mm wide and fall off immediately after the flower opens. The stamens are arranged in five bundles around the flower and each bundle contains 5 to 12 stamens.
Flowering can occur at any time of the year and is followed by fruits which are woody capsules, 3.9–4.9mm long in loose clusters along the stems.

Cultivation –
Melaleuca leucadendra is an evergreen tree that is harvested in nature for its essential oil, known as cajuput oil, and various medicinal uses; it is also often cultivated for its timber.
The tree is also grown as an ornamental plant in parks and large gardens.
It is a plant of the tropics and subtropics of the lowlands, where it is found at altitudes up to 800 meters. It grows best in areas where annual daytime temperatures are between 28 and 37 ° C but can tolerate 18-40 ° C.
This plant prefers an average annual rainfall in the range 800 – 1,400 mm, but tolerates 650 – 1,600 mm.
It prefers a soil that maintains humidity with a pH in the range of 6 – 7, tolerating 5.5 – 8.5 and a position in full sun; it also tolerates light and saline soils.
Plants are able to withstand periodic flooding of the soil and strong currents. Adult plants are drought tolerant and very wind resistant, able to tolerate salt-laden storms.
In some sites, the plant has the potential to escape cultivation and become invasive.
It is a moderately fast growing plant with an annual wood production potential of 10 – 16 cubic meters per hectare.
Trees usually survive forest fires.
Propagation occurs by seed.

Customs and Traditions –
This plant was the first Melaleuca to be described and was described by a specimen that grew in Indonesia.
It was formally described for the first time in 1762 by Charles Linnaeus in Species Plantarum as Myrtus leucadendra. Linnaeus used a description of the species written by Georg Eberhard Rumphius in 1741, before the modern classification system was devised by Linnaeus. Rumphius had described a plant that grows in what is now Indonesia. Later, Linnaeus realized that this species had little in common with other species of the genus Myrtus and described the genus Melaleuca to accommodate this species. The description was published in 1767 in Mantissa plantarum. It follows that although almost all Melaeuca are found only in Australia, the first type specimen came from Indonesia.
The Aborigines used strips of bark from this tree and tied them to a Dodonaea branch frame to build waterproof huts. The bark was used to wrap food before cooking in an underground oven called kap mari. It was also used to wrap the bodies of their dead. The bark of very large tree trunks was used to make bark canoes. The crushed leaves were used to treat respiratory infections and the flowers to make a sweet drink.
Melaleuca leucadendra is often grown in parks and as a street tree in tropical and subtropical areas such as Brisbane and as far south as Sydney. It has also been used in Hong Kong street trees.
This plant uses the essential oil which is used as a flavoring in items such as candies, baked goods, condiments, condiments, etc.
The fruits and leaves are used to make a tea.
The essential oil obtained from the leaves contains various terpenoids including 50 – 60% of highly antiseptic cineol, betapinene and alpha-terpineol.
It is aromatic and stimulating with a strong camphor aroma. It is an expectorant, relieves spasms, increases sweating and promotes the expulsion of internal parasites.
It is used internally in the treatment of bronchitis, tuberculosis, colds, sinusitis, gastric infections and roundworms.
It is used externally to treat rheumatism, gout, neuralgia, acne, nasal congestion, sinusitis, toothache, chilblains and skin diseases.
The leaves have antibacterial, anti-inflammatory and anodyne properties. They are effective in treating conditions such as coryza, flu, cough, asthma, dyspepsia, earache, toothache, rheumatism, osteodynia, neuralgia, wounds, burns and postpartum hematometra.
The wood is hard, heavy and thickly grained and resistant in humid soils; it is used for ship building, mining lumber, boat building, railway sleepers, poles, etc …

Preparation Method –
From the Melaleuca leucadendra a bit of everything is used, from the bark to the leaves and the twigs that can be collected at any time of the year and used fresh, dried or you can extract the essential oil after leaving the leaves to ferment for a few days and young sprouts; it has a strong and spicy smell.
The essential oil, called cajeput oil, has a pleasant aroma similar to camphor and is used in detergents, soaps, perfumery and insect repellents.
This herb, especially in the form of an essential oil, is subject to legal restrictions in some countries.
Essential oils can be distilled from this plant depending on where the trees are located. Two of the most common chemotypes are based on methyl eugenol and E-methyl isoeugenol.
Among other uses, it should be remembered that an essential oil is obtained from the sprigs and fresh leaves.