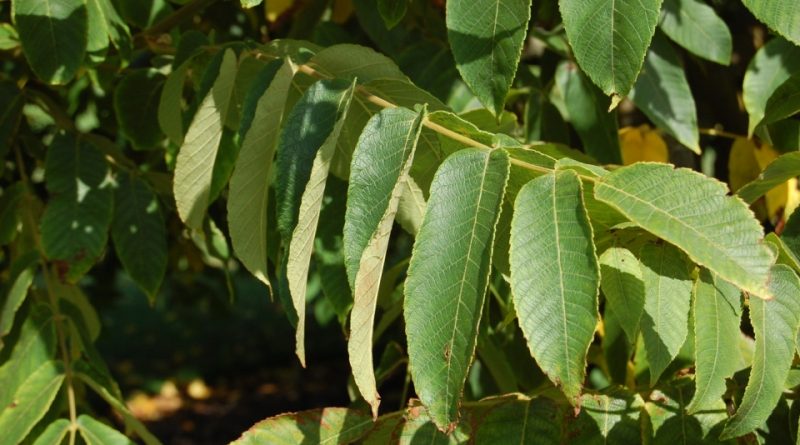 The Butternut or white walnut (Juglans cinerea L. 1759) is an arboreal species belonging to the Juglandaceae family.

Geographic Distribution and Habitat –
Juglans cinerea is a species of walnut native to the eastern United States and southeastern Canada.
Its distribution range extends from east to New Brunswick and from southern Quebec to west to Minnesota, from south to north of Alabama and from southwest to north of Arkansas. In the United States it is absent from most of the southern states.
Its natural habitat is that at medium altitudes in the Columbia River Basin, Pacific Northwest and is a plant that prefers a cooler climate than the black walnut.
It is most frequently found in coves, banks and terraces of streams, on slopes, in rocky ledges and other sites with good drainage. It is found up to an altitude of 1,500 meters and the nuts are eaten by wildlife. 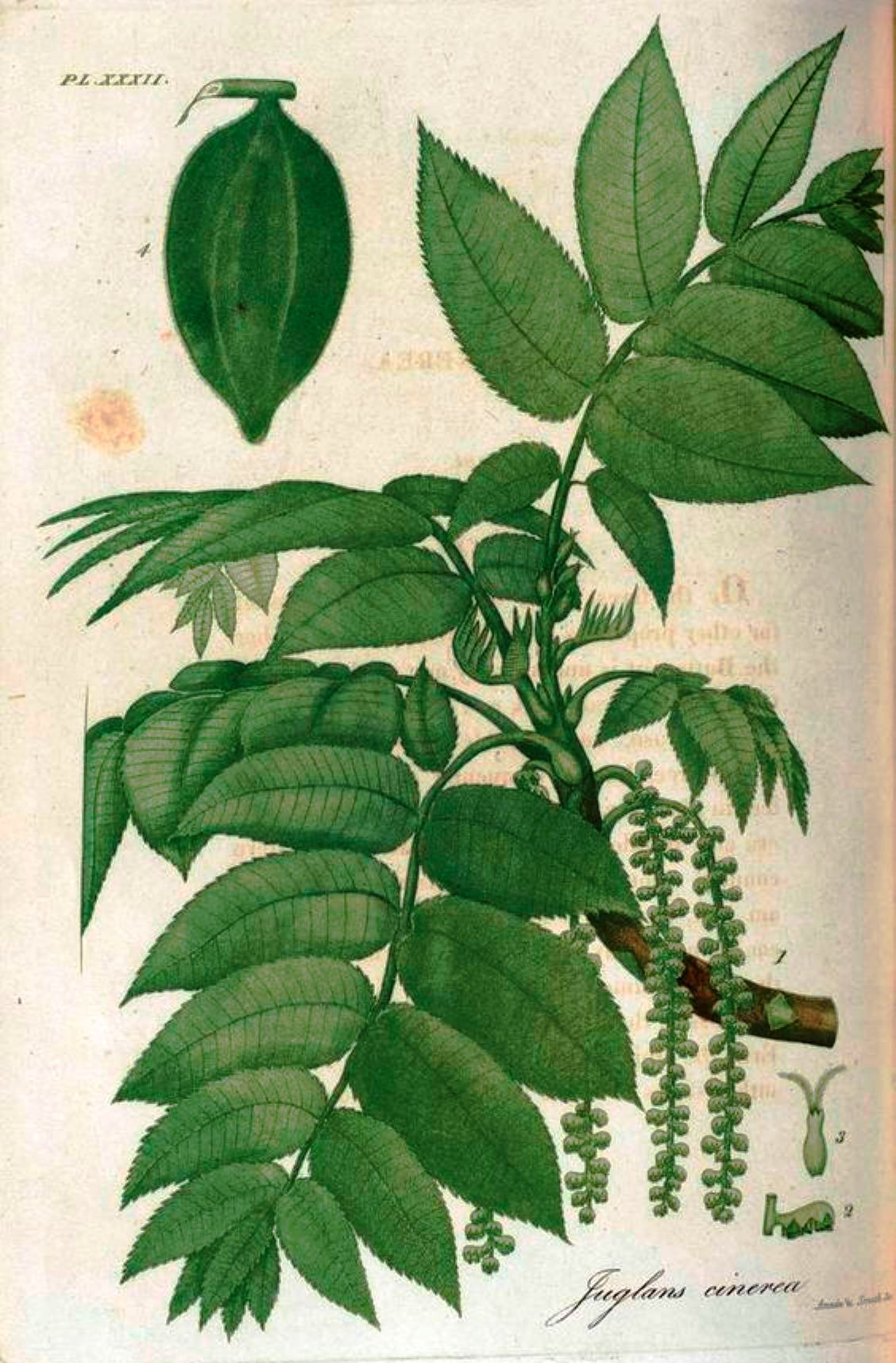 Description –
The Butternut is a deciduous tree that grows up to about 20 meters in height but can reach heights of up to 40 meters.
It is a slow growing plant that rarely lives more than 75 years.
The stem has a diameter of 40-80 cm, with a light gray bark.
The leaves are alternate and pinnate, 40–70 cm long, with 11–17 leaflets, each 5–10 cm long and 3–5 cm wide. The leaves have a terminal leaf at the end of the petiole and have an odd number of leaflets. The whole leaf is downy and pubescent and a little brighter and more yellow green in color than many other tree leaves.
The species is monoecious, with male flowers that are thin yellow-green, inconspicuous catkins, which develop from auxiliary buds, and female flowers that are short terminal spikes on the shoots of the current year. Each female flower has a light pink stigma. Flowers of both sexes do not usually ripen at the same time on a single tree.
The fruits are pseudodrupes gathered in clusters of 3-6 with an ellipsoid to ovoid or cylindrical shape of 4-8 cm, with exocarp first green and sticky due to dense glandular hairs, then brown when ripe, woody endocarp of 3-6 x 2- 4 cm with about 8 main longitudinal ridges and ridged for other gills and secondary ridges, which contains the edible seed.

Cultivation –
Juglans cinerea is a deciduous plant related more to the photoperiod than to temperature. The fall occurs when the length of daylight reaches 14 hours. This can vary up to a month in the northern and southern extensions of its range. Leaf fall in autumn is early and begins when daylight falls to 11 hours.
This plant grows best on the banks of streams and in well-drained soils. It is rarely found on dry, compacted or sterile soils. It grows better than black walnut, however, on dry and rocky soils, especially of calcareous origin.
Although young trees can withstand lateral competition from other plants, they do not survive shading from above. Therefore, it is classified as a plant that is intolerant to shade and to competition from other species.
For its cultivation, in general, it requires a deep and well-drained soil and a position sheltered from strong winds. It prefers a slightly alkaline and sandy soil with a pH around 6-7. It does not like compact soils or clayey subsoils, otherwise the trees grow well on most soils. This is the most cold-hardy nut, tolerating temperatures down to around -35 ° C in North America when fully dormant. Unfortunately, it is less hardy in Britain, as the wood doesn’t ripen as well due to the cooler summers. Young plants in spring can be damaged by late frosts. It is sometimes grown in North America for its edible seeds.
It is sometimes planted as a wood tree in Denmark and Romania. Plants produce a deep taproot and are intolerant to root disorders. Seedlings should be planted in their permanent locations as soon as possible and provided some protection for their first winters as they are quite tender when young. The trees cast a dense shadow which reduces the amount of species able to grow under them.
Plants should only be pruned when they are completely dormant in winter or when they are full leaf, otherwise any cuts will ooze profusely.
Propagation is by seed which is best sown as soon as it is ripe in single deep pots in a cold greenhouse.
It is necessary to protect young seedlings from mice, birds, squirrels, etc. The seed usually germinates in late winter or spring. The transplant should be done in early summer and it is advisable to protect the seedlings from the cold for the first or two winters. The seed can also be stored in cool, moist conditions (such as a refrigerator’s salad compartment) during the winter and sown in early spring, but can therefore take a period of cold stratification before sprouting.

Customs and Traditions –
Juglans cinerea is found with many other tree species in different types of mixed mesophytic forests. It is an associated species in the following four types of northern and central forest cover: sugar maple-linden, yellow poplar-white oak-northern red oak, beech-sugar maple and birch-sycamore. The trees that are commonly associated are: linden (Tilia spp.), Sour cherry (Prunus serotina), beech (Fagus grandifolia), black walnut (Juglans nigra), elm (Ulmus spp.), Hemlock (Tsuga canadensis), American walnut (Carya spp.), Oak (Quercus spp.), Red maple (Acer rubrum), sugar maple (Acer saccharum), yellow poplar (Liriodendron tulipifera), white ash (Fraxinus americana) and yellow birch (Betula alleghaniensis). In the north-eastern part of its range it is often found with the sweet birch (Betula lenta) and in the northern part of its range it is occasionally found with the white pine (Pinus strobus).
Juglans cinerea easily hybridizes with Japanese walnut.
It is a plant that can be attacked by various pests and is very susceptible to fire damage, and although the species is generally wind-stable, it is prone to frequent storm damage.
Ecologically the species is still in good conservation status and is not listed as federally threatened in the United States, but is listed as “Special Concern” in Kentucky, “Exploitably Vulnerable” in New York State and “Endangered.” “in Tennessee.
In addition, the Committee on the Status of Endangered Wildlife in Canada placed the plant on the list of endangered species in Canada in 2005.
Juglans cinerea nuts are edible and have been processed into oil by Native Americans for various purposes, including anointing. The peels contain a natural yellow-orange dye.
The wood is light and polishes well, and is highly resistant to rot, but is much softer than black walnut. Oiled, the wood grain usually shows a lot of light. It is often used to make furniture and is a favorite of wood carvers.
The bark and rind of walnuts were often used to dye fabrics in colors between light yellow and dark brown. To produce the darker colors, the bark is boiled to concentrate the color. This appears to have never been used as a commercial dye, but rather was used to color homemade textiles.
In the mid-19th century, residents of areas such as southern Illinois and southern Indiana – many of whom had moved there from the southern United States – were known as “butternuts” because of the home-made fabric dyed in ” butternut ”which is the American name of this nut.
Later, during the American Civil War, the term “butternut” was sometimes applied to Confederate soldiers. It is also possible that butternut was used to color the fabric worn by a small number of Confederate soldiers.
The similarity of these uniforms to dyed butternut clothes, and the association of butternut dyeing with homemade clothes, led to this derisive nickname.
The crushed fruit can also be used to poison fish, although the practice is illegal in most jurisdictions.
The leaves can also be dried and stored for later use.
From the young roots, a black dye is obtained. Plants produce chemicals that can inhibit the growth of other plants. These chemicals are dissolved by the leaves when it rains and washed into the soil below, reducing plant growth under the tree. The roots of this species produce toxic substances for many plant species, in particular apples (Malus species), members of the Ericaceae, Potentilla spp and white pines (some Pinus spp.).
This plant has been used by various North American Indian tribes as a laxative and tonic remedy to treat a variety of conditions including rheumatic and arthritic joints, headaches, dysentery, constipation and wounds.
In modern herbal medicine it is considered a valid remedy for chronic constipation, gently favoring the regularity of defecation. It is especially useful when combined with a carminative herb such as Angelica archangelica. Quills or inner cortex are one of the few powerful laxatives that are safe to use in pregnancy.
Juglans cinerea also lowers cholesterol levels and promotes the elimination of waste products by the liver.
Furthermore, the nutritional values ​​per 100 g of walnut are reported below:
– Energy 613 kcal 2561 kJ;
– Carbohydrates 12.05 g;
– Dietary fiber 4.7 g;
– Fat 56.98 g;
– Protein 24.90 g;
– Water 3.34 g;
– Retinol (vit. A) 6 μg (1%);
– Thiamine (vitamin B1) 0.383 mg (29%);
– Riboflavin (vit. B2) 0.148 mg (10%);
– Niacin (vit. B3) 1,045 mg (7%);
– Pantothenic acid (vit. B5) 0,633 mg (13%);
– Vitamin B6 0.560 mg (43%);
– Vitamin C 3.2 mg (5%);
– Calcium 53 mg (5%);
– Iron 4.02 mg (32%);
– Magnesium 237 mg (64%);
– Phosphorus 446 mg (64%);
– Potassium 421 mg (9%);
– Sodium 1 mg (0%);
– Zinc 3.13 mg (31%).

Preparation Method –
Butternut is a plant that has been used both for making dyes, for the use of wood, and for edible uses (the fruit) but also for medicinal uses.
Among the various preparations we remember the infusion of the inner bark which is used as a cholagogue, febrifuge, mild laxative and stomachic. It is effective in small doses without causing cramps. The bark is best harvested in the fall although, according to other reports, it is better to be harvested in late spring. An infusion of the dried outer bark is used in the treatment of toothache and dysentery. Walnut oil is used in the treatment of tapeworms and fungal infections.

One thought on “Juglans cinerea”