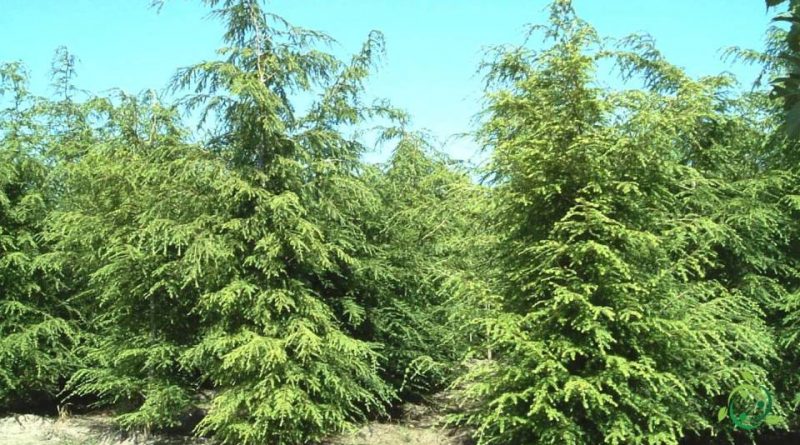 The Canadian Hemlock (Tsuga canadensis (L.) Carrière) is a conifer native to eastern North America and is the tree of the state of Pennsylvania.
Its original range goes from eastern Canada to northern Alabama. In Europe it is used as an ornamental species.
The reproductive structures of this plant are yellow-orange cones, pedunculated, numerous, lateral and axillary; the female cones have a short, terminal peduncle. When ripe they are ovate and obtuse at the apex, brown, up to 3 cm long. these after having released the seeds, fall to the ground.
This plant grows in the cool, humid temperate zone of eastern North America, where the average annual precipitation is around 700 – 1,500 mm.
It is an easily cultivable plant that thrives best when grown in deep, well-drained soils in the wetter regions of the temperate zone, where it appreciates areas with higher rainfall.
The tree has shallow, wide roots and creates a dense shadow. Especially when it grows in stands, it allows very few other plants to flower below it.

Cultivation technique –
Tsuga canadensis, however, succeeds in most soils and exposures, but prefers acidic sandy soils and also tolerates some limestone, if the soils are organic enough.
In nature, these plants often grow on highly acidic soils with a pH between 3 and 4.
This plant tolerates shade very well when young, but they need more sunlight as it grows. In general the seedlings grow slowly and do not tolerate full sunlight until they have stabilized, usually when they are between 90 and 150 cm tall.
If, on the other hand, it grows in dry or exposed places, the plant has a more slender growth.
Tsuga canadensis is the most shade tolerant of all tree species and in natural populations, saplings can remain in the undergrowth for 25-400 years waiting for an empty space to appear between the foliage after which they can grow relatively quickly.
This species is slow-growing but long-lived in nature, with nearly 1,000 naturally occurring specimens.
Growth is very slow for the first few years, then grows faster with annual shoots up to 60cm long. This growth rate soon slows down if the tree loses apical dominance and starts growing slowly again.
This plant because it has shallow roots is highly susceptible to wind if exposed, by logging or if planted in open sites. Plants should be staked for the first two to three years after transplanting to prevent gusts.
Furthermore, young seedlings are highly susceptible to fire damage due to their thin bark and root injuries often occur also due to high intensity fires where the leaf substrate is highly concentrated.
The reproduction can take place by seed and the production of these takes place around the age of 20 – 40 years, with good harvests every 3 – 4 years.