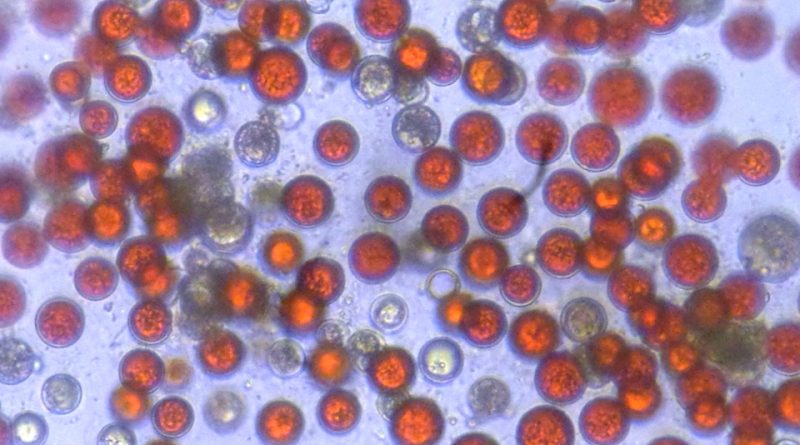 Etymology –
The term Haematococcus comes from the Latin haemato “emato” and coccus “cocco”, a sphere of blood.
The specific epithet pluvialis comes from rain rain: linked or connected to rain, for example that blooms after rain.

Geographic Distribution and Habitat –
Haematococcus pluvialis is usually found in temperate regions around the world. Their resting cysts are often responsible for the blood-red color seen at the bottom of dry rock pools and bird baths. This color is caused by astaxanthin which is believed to protect resting cysts from the damaging effect of UV rays when exposed to direct sunlight.
Its habitat consists of lakes, rivers and freshwater pools. 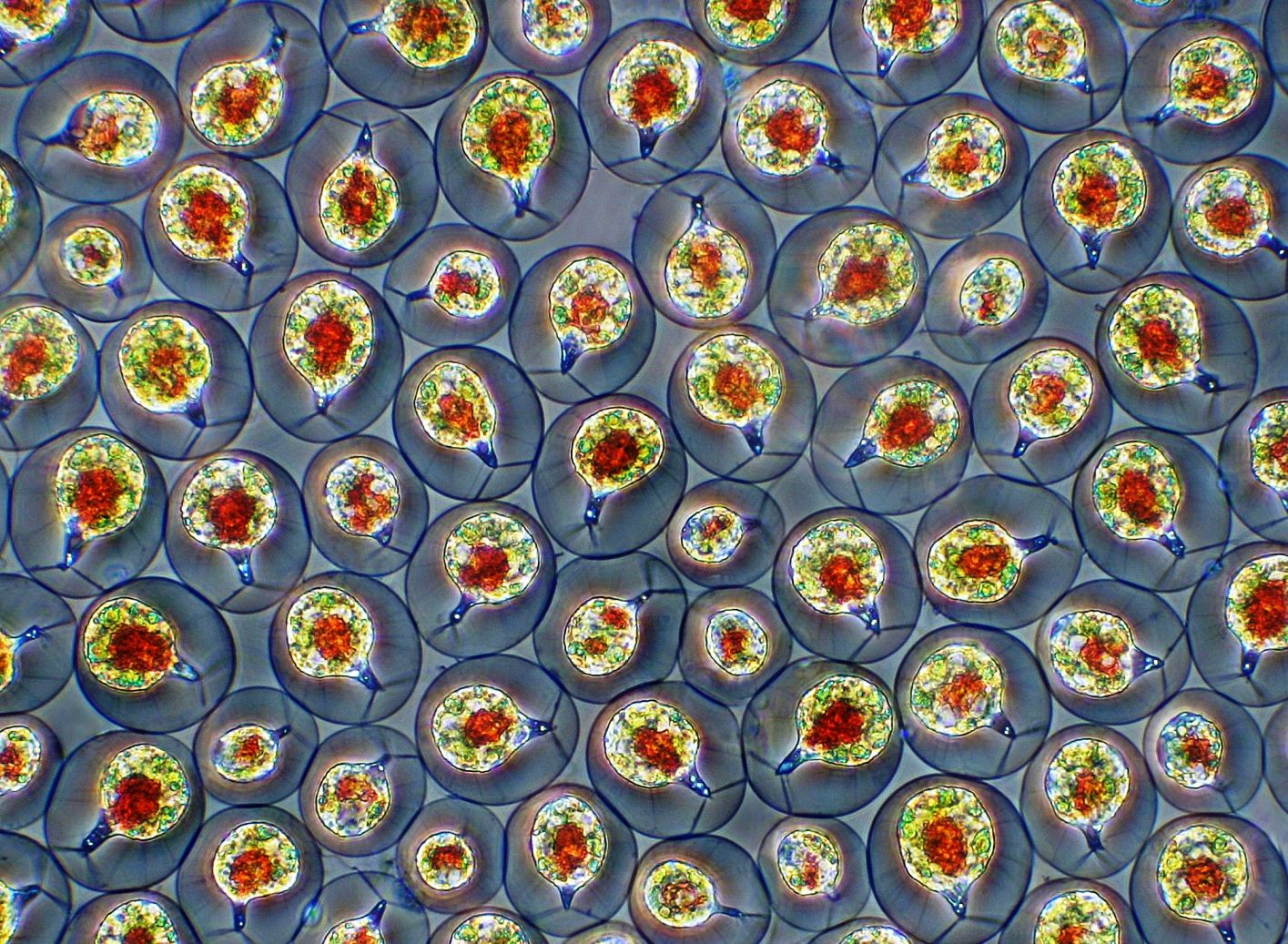 Description –
Haematococcus pluvialis is a unicellular green microalgae belonging to the Chlorophyceae class. This species can be found in different types of cell morphologies: macrozoid, microzoid, palmella and hematocyst (or aplanospora).
When the growth conditions are favorable it is found mainly in the vegetative state in the form of macrozoids (spheroidal, green and biflagellate cells), which are characterized by high motility. In this state, macrozoids can divide by mitosis to generate 32 daughter cells (microzoids) within the cell wall of the mother cell.
On the other hand, when stressful conditions occur such as excessive light intensity, excessive salinity, nutrient deficiency or anything that can lead to oxidative stress, the macrozoids begin to lose their flagella, stop dividing and undergo the so-called process of “encysting”.
Their cell wall begins to thicken (palmella stage), until the formation of an ultra-resistant coating consisting of a trilaminar sheath and a secondary wall resistant to acetolysis that allows them to survive extreme chemical-physical conditions.
At this point, the palmella enters the hematocyst stage (or aplanospora) and begins to synthesize and accumulate high amounts of carotenoids within lipid bodies to protect itself from damage caused by radiation and oxidative stress. Carotenoids are in fact able to neutralize free radicals and ROS, thanks to their molecular structure characterized by long terpene chains with conjugated double bonds.
Of all the carotenoids, astaxanthin is the one produced in the greatest quantity (up to 99% of the total carotenoids in some conditions), that is, up to 6% of its dry weight in astaxanthin, acquiring a bright red color. This ability makes H. pluvialis unique in its kind and of very high industrial interest for the production of this molecule which has many applications in the food, nutraceutical, pharmaceutical and cosmetic sectors.

Cultivation –
For the multiplication and cultivation of this alga, the marc can be used which can be used as a basal medium.
The culture medium must consist of marc diluted to 3% and supplemented with 0.7% of NaCl, with a pH adjusted to the value of 7.0. For the initial culture (vegetatively growing cells) an inoculum quantity of 0.4 g / L can be used. The culture should be performed with 0.5 vvm of air at 25 ° C and up to 15 days of culture.

Customs and Traditions –
Haematococcus Pluvialis is a ubiquitous green microalgae characterized by the ability to accumulate high quantities (up to 40g per kg of dry biomass) of astaxanthin, a photoprotective substance for cells and spores. In comparison to other sources, Haematococcus pluvialis has been shown to be the most important and sustainable natural resource of asta xanthine.
Astaxanthin is a red pigment found in numerous living organisms, including crabs, lobsters and salmon. It is a lipophilic carotenoid and more generally a thermostable active ingredient, characterized by the presence of hydroxyl and ketone groups and conjugated double bonds which give it its characteristic red color.
Astaxanthin is an important substance in aquaculture and for the production of cosmetics.
Astaxanthin is, in fact, a powerful antioxidant (it has an oxygen free radical scavenger activity 6000 times higher than vitamin C), it has photo-protective and anti-inflammatory properties: it is able to prevent and limit lipid peroxidation protecting cell membranes, while some studies attribute it soothing properties of gastric ulcers, and protective activity against cardiovascular and neurodegenerative diseases.

Preparation Method –
Astaxanthin is mainly used as a food supplement and in the production of feed in fish farms to obtain the desired red pigmentation of fish and crustaceans. There are also numerous studies underway for the development of astaxanthin-based drugs for the diseases listed above and for the protection of the skin from damage from UV rays.