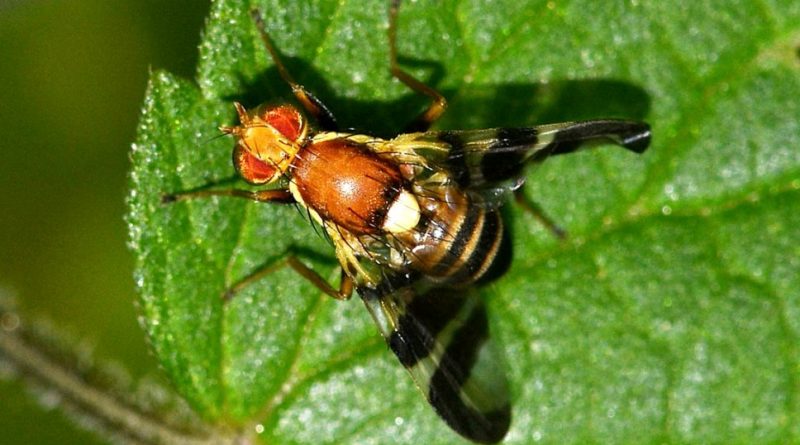 The walnut fly (Rhagoletis complete Cresson, 1929) is an insect belonging to the Tephritidae family.

Geographic Distribution and Habitat –
The walnut fly is a species native to North America, originally found in the United States and Mexico but then accidentally introduced to Europe, probably in the 1980s.
In Italy it arrived in northern Italy in 1991 and in 2010 it reached Campania. It is currently present throughout the peninsula and in Switzerland.

Morphology –
At the adult stage, the complete Rhagoletis measures 4-8 mm in length and is recognized for having a cream-colored scutellum, which may have black spots, and a scutum devoid of yellow or black parts.
The wings are transparent, with three dark bands of which the outermost V-shaped; there are also three pairs of frontal bristles.
The larvae are yellowish white, apod and microcephalic.

Attitude and Life Cycle –
The biological cycle of the complete Rhagoletis is annual; this insect, during the winter, overwinters in the ground at a depth of about 5 cm in the form of a pupa.
Arriving from mid-June to September-October, the adults flicker; the highest densities of adults are found between the end of August and mid-September; spawning begins two weeks later.
Each female lays up to 400, in groups of five to twenty units, inside the husk of the walnuts, generally choosing the most tender ones and positioned in the highest part of the trees. The females mark the walnuts where they have already laid with an inhibitory pheromone, in order to avoid the deposition of other females.
From the eggs, which hatch within a week, come out the larvae that feed on the husk; the maturation of the larvae takes place in 3-5 weeks, after which they drop from the tree to go underground; diapause normally lasts for one year, but can last up to three.
The walnuts where the insect has deposited are easy to recognize as small dark spots appear from which blackish secretions drip.
The husk breaks down with a copious secretion of liquids rich in tannin. The shell blackens and, often, the kernel itself can become moldy. The stains on the shell are quite persistent and can cause a depreciation of the nuts. The dried husk adheres to the shell, causing further difficulties in cleaning operations. The larvae can damage the conductive vessels, compromising the development of the kernel, which shrivels and dries up.
In cases of massive presence of the complete Rhagoletis, the entire production can be compromised, so much so that in cases of high infestation, an early drop of the fruit occurs, but it is equally frequent that they dry up remaining on the plant. The cultivars show a different sensitivity, mainly linked to the hardness of the epicarp and their phenology.

Ecological Role –
The walnut fly is a phytophagous insect, which can cause a loss of up to 30% of the harvest, and the fruits that are recovered still suffer a serious decline in quality due to the blackening of the shell and the kernel, causing economic damage.
This fly attacks all the typical walnut ones, with a preference for the earliest ones.
In addition to the damage caused by the larvae, other insects can be attracted by the decaying husk, and in turn lay the eggs.
Measures to reduce populations of this insect include the use of fluorescent traps to capture adults and ground cover under trees to prevent larvae from burying themselves.
Furthermore, the natural enemies of this fly are not particularly effective. Given the harmfulness of the dipteran, and the high level at which the infestation can reach, control by chemical means is often necessary. Given the habit of adults to feed on honeydew and leaf exudates, hydrolyzed protein baits could be used on part of the vegetation, once authorized.
Normally the measures to counter this fly are to remove and destroy the fallen and infected fruit.
Removal of infested fruit is a significant preventative measure. A similar measure is the ground cover with sheeting under the trees, so that the larvae cannot pupate and overwinter in the ground. Early harvest can be used to avoid pest attack.
Monitoring with yellow chromotropic traps also allows to define the size of the population and the capture of a certain number of adults, the traps must be used during the flight period (from June to September). The control towards the end of July on the plant allows to verify the beginning of the trophic activity of the complete Rhagoletis to decide the moment of intervention with various strategies.
Chemical treatments with conventional products (when the law provides for it or exceptions etc.) such as the discussed neonecotinoids (Thiacloprid) must be the last resort; these are admitted for the fight of the second generation of the apple fly (Cydia pomonella) and although they are not registered for the walnut fly, they also have good effects against the complete Rhagoletis. On the other hand, the effects against other useful insects, such as pollinators, mean that these treatments, over time, create even more unfavorable conditions from an ecological and also a productive point of view.
In the biological field, the treatments allowed by the legislation are based on the “Attract and Kill” technique and concern the use of a localized protein bait (or by sprinkling) and mixed with Spinosad, giving acceptable results, the control instead with the Natural enemies of the Diptera are based on the use, on egg predators such as Pyemotes ventricosus and Orius insidiosus, parasitoids such as Sparangia rugosicollis, Opius humilis and Biosteres ssp.