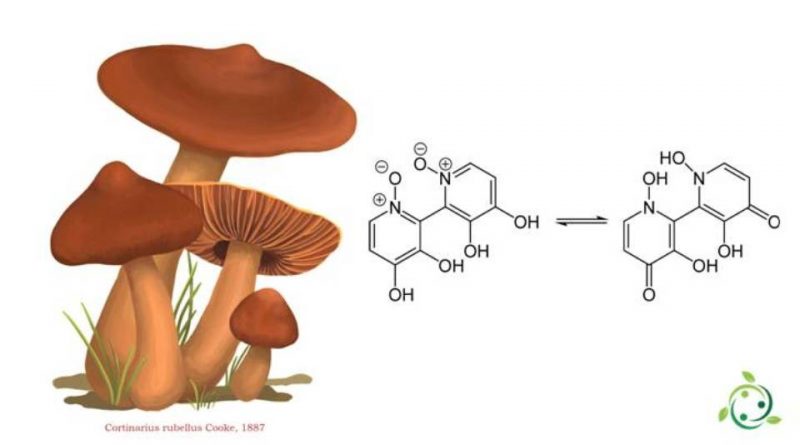 Orellanine whose term in the official IUPAC nomenclature is: 3,3 ′, 4,4′-Tetrahydroxy-2,2′-bipyridine-N, N′-dioxide, also known as: 2,2-bipyridine -3,3-4,4-tetrol-1,1-dioxide is an alkaloid.
Orellanine has a brute or molecular formula: C10H8O6N2 and from a physical point of view it appears as a colorless crystal.
Orellanine is a cytotoxic mycotoxin contained in some fungi of the genus Cortinarius (Cortinarius orellanus Fr., 1838 and Cortinarius rubellus Cooke, 1887).
Orellanine was first isolated in 1955 by the Polish doctor Stanisław Grzymała but the chemical structure was only discovered in the last half of the seventies by the Polish chemists Antkowiak and Gessner.
Orellannin has a double ring structure in which both rings are pyridines (heterocyclic rings with a nitrogen atom). At the same time Antkowiak and Gessner also discovered a similar substance, orellina which, although similar from a structural point of view, is not toxic.
Orellanine, on the other hand, is toxic and is responsible for the orellanic syndrome.
Orellanine, which is extracted from the carpophores of Cortinarius orellanus and other Cortinarius, is a crystalline substance similar to sugar and is a hydrolyzed bipyridine that has no odors and flavors; it is inactivated at very high temperatures, and rendered harmless by light. For exposure to U.V. or at temperatures higher than 270 ° C, it is transformed into orellin and orellinin.
The orellanine degrades in the orellin, a compound that has no toxicity on animals.
The orellanine is therefore quite thermostable so that the toxicity of the carpophores is not altered either by cooking or by drying, at least up to temperatures of 150 ° C. Within a few days, the orellanine is permanently deposited in the kidney, forcing the patient to undergo dialysis for life, and in many cases renal transplantation.

The minimum lethal dose (LD50), approaches 50 g. of fresh mushroom, 40-50 g would therefore be sufficient. of fresh mushroom to cause fatal poisoning in an adult subject.
It must be said, however, that the concentration of toxins referred to a specific fungal species undergoes changes according to the various geographical areas and there is also an individual variability among the various subjects, since not all intoxicated suffer from renal failure. The cortinarine, structurally similar to the amanitins, would have an involvement in the orellanic syndrome; at the current state of research, however, there are no definitive confirmations.
The cytotoxic activity of these cortinarins would inhibit the RNA-polymerase and therefore protein synthesis; they would have the ability to block renal functions with a cumulative effect, and would have a delayed action.
The symptoms of taking this alkaloid are as follows:
– I phase: after 4-9 hours appear dryness of the oral mucosa, insatiable thirst, continuous urination; then we move on to a second phase with lack of urine, vomiting, diarrhea, abdominal pain; finally the gastrointestinal syndrome regresses rapidly until the subject goes through a period of well-being (remission);
– II phase: the first phase is followed by the phase of acute renal failure (IRA), the intoxication not well treated causes death from uremia;
In the event that the intoxicated person is saved, he will have to undergo dialysis for life or until a possible kidney transplant.