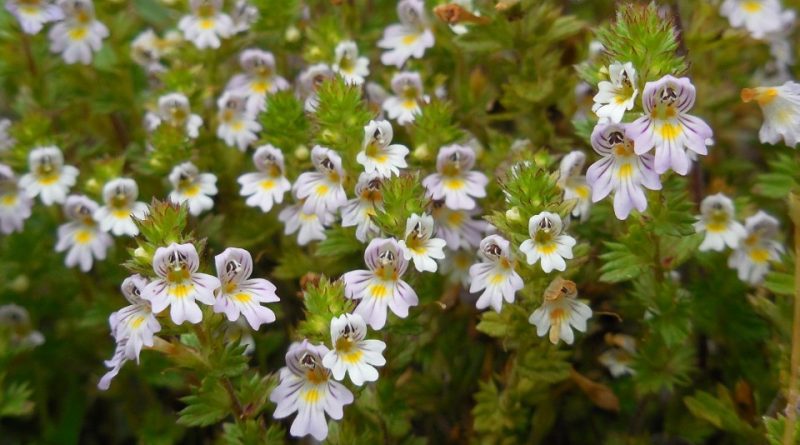 Geographic Distribution and Habitat –
Drug eyebright is an annual plant with a prevalently Central European distribution.
It is present in all regions of mainland Italy except in Val d’Aosta. The regional distribution is very incomplete, perhaps because the species has been little observed.
Its habitat is that of uncultivated and pasture-meadows on predominantly arenaceous substrates and on soils with subacid-subneutral reaction rich in skeleton, arid in summer, from sea level to about 1000 m.
Plants of this genus are hemiparasitic (partially parasitic) and obtain some mineral elements from the host plant; unlike totally parasitic plants, they possess green roots and leaves and can even survive on their own. 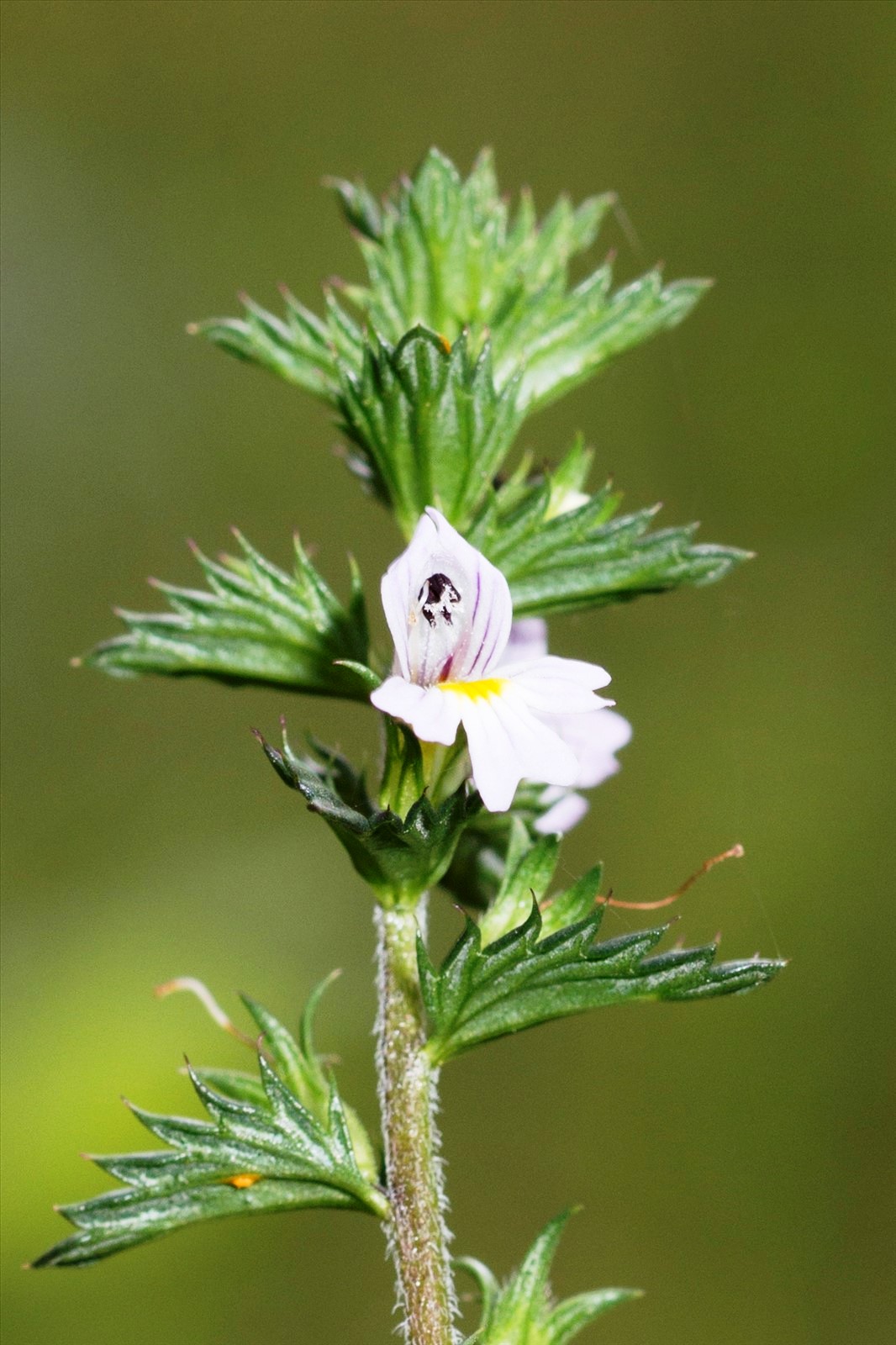 Description –
Drug eyebright is a plant that grows to a maximum height of 10 – 40 cm.
The roots are small taproots.
The aerial part of the stem is erect, simple or branched.
In this plant there are both leaves and bracts (similar to leaves), while the stipules are absent. The leaves have oval shapes with obtuse apex and with 3 – 6 not sharp lateral teeth. The arrangement of the leaves and bracts along the caule is opposite. The bracts are positioned at the height of the inflorescence and are wider than the leaves (with the maximum width in the lower third); they are provided with 4 – 8 acute (with angles less than 90 °) and mucronate teeth, 1.5 – 3.5 mm long; they are usually hairless (or with some glandular hair).
The inflorescences are formed by single flowers collected in spiciform racemes.
The flowers are tetra-cyclic (ie there are 4 whorls: calyx – corolla – androecium – gynoecium) and pentamers (each whorl has 5 elements) and hermaphrodites and zygomorphs, with a length of 7 – 10 mm. The calyx is made up of 5 sepals welded together and is hairless (or with some glandular hairs), with a length of 4 – 5.5 mm. The corolla is composed of 5 petals (sometimes imbricated), it is gamopetala and zygomorphic, that is bilabiate; the upper lip has a shape that resembles a squared helmet with a blunt edge or even bilobo with a rim turned backwards; the lower lip has three lobes, also with the edges blunted and in turn divided into two lobes. The corolla has no spur, sac or goiter. The two lips form a right angle. The color is white or yellow (sometimes it is mottled with purple); the upper lip is tinged with violet. Corolla length: 6 – 8 mm.
The androecium has 4 didynamic stamens (2 long and 2 short) with adnate filaments to the corolla. The anthers are sagittate, bilocular and dehiscent through two longitudinal fissures. The pollen sacs are divergent and the pollen is tricolpated.
The gynoecium is superior and bicarpellar and is normally bilocular; axile or parietal placentation; the stylus is unique with bifid stigma. The ova for each niche are numerous. The nectar disc is positioned around the base of the ovary.
The antesis is between May and October.
The fruit is a 4-5.5 (6) mm loculicidal capsule, 2-3 times longer than wide, ovoid or ellipsoid, truncated at the apex and compressed laterally, hairy. Numerous seeds, ellipsoid, brownish with longitudinal ribs and small transversal striae.

Cultivation –
The drug eyebright is an annual plant that grows spontaneously in uncultivated and meadows-pastures on predominantly arenaceous substrates, on soils with a subacid-subneutral reaction, rich in skeleton and dry in summer, from sea level to about 1000 m.
It is a hemiparasitic plant that obtains some mineral elements from the host plant; unlike totally parasitic plants, it has green roots and leaves and can even survive on its own. It blooms between May and October.

Customs and Traditions –
Euphrasia stricta is a plant that has long been used in folk medicine.
It is used in herbal medicine to treat inflammatory conditions of the eyes, especially allergic conjunctivitis. At the European level, the German Commission did not consider that there was sufficient evidence to prove that this plant is useful for all conditions. In fact, there is a lack of human clinical studies to support the traditional claims, although the absence of evidence is not proof of ineffectiveness.
This plant has decongestant, stomachic, bitter-tonic, astringent, anti-inflammatory, ocular antiseptic and anti-allergic properties.
Euphrasia is widely used for washes and eye packs in the presence of conjunctivitis and blepharitis.
Throughout Europe, euphrasia knows a wide and widespread tradition of popular use in the treatment of ocular affections; the relief from such ailments was a source of great joy, hence the scientific name (from the Greek euphrasia = gaiety) and the numerous popular names (in English the plant is known as Eyebright = luminous eye, while in France we speak of Casse-Lunettes = brain glasses).
As mentioned, euphrasia is a plant with an anti-inflammatory activity that is expressed above all at the ocular level. For this reason, the plant is frequently used in eye drops or eye packs, to be used in case of conjunctivitis, blepharitis or other eye diseases (use which however has not been officially approved).
The antiphlogistic action exerted by euphrasia is attributable to the aucubine contained in it.
Furthermore, this molecule has been shown to exert a hepatoprotective activity against damage caused by carbon tetrachloride and alpha-amanitin poisoning, but not only. In fact, some studies conducted in vitro have also shown that aucubin is able to inhibit the hepatitis B virus. However, before similar medical applications of euphrasia can be approved, it is necessary to conduct further and more in-depth studies. .
Finally, euphrasia is also used in cases of colds, rhinorrhea and hay fever.
Euphrasia is also widely used in the homeopathic field, where it can be found in the form of granules, oral drops and eye drops.
Homeopathic medicine uses this plant in case of allergic rhinitis, conjunctivitis, excessive tearing, irritation, burning and redness of the eye.
The amount of homeopathic remedy to be taken can be different from individual to individual, also depending on the type of disorder that needs to be treated and depending on the type of preparation and homeopathic dilution to be used.

Preparation Method –
Drug eyebright is widely used for eye washes in the presence of diseases such as conjunctivitis, blepharitis, styes, etc.
For external use it is also used as eye drops in cases of eye disorders: fatigue, burning, photophobia, styes, blepharitis.
Finally, it is suggested to use it as a nasal ointment in the presence of rhinorrhea.
The infusion of euphrasia is used for external use at 2-3% in the form of compresses to calm inflamed eyes. In this regard, one tablespoon of dry plant is infused in a cup of boiling water, left to cool and washed the eyes 2 or 3 times a day. You can also dip a cloth and place it on the eyes by massaging lightly. Often, for similar applications, euphrasia is associated with plants rich in mucilage and / or with an anti-inflammatory and decongestant action (eg Chamomile, Sweet clover, Plantain).