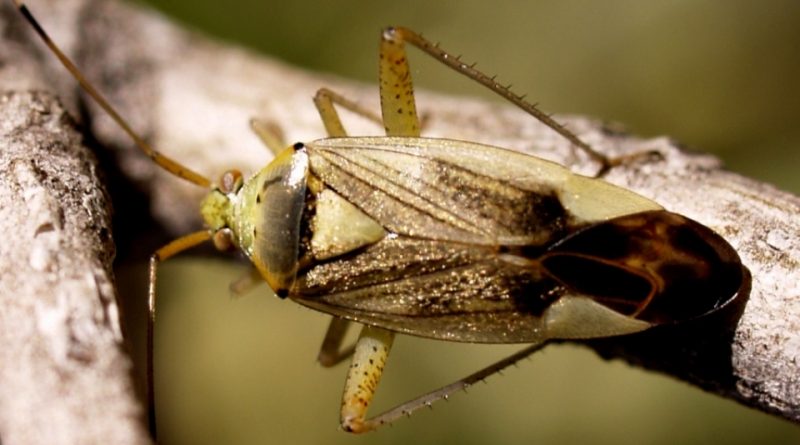 The olive myrid (Closterotomus trivialis A. Costa, 1853) is a small insect belonging to the Miridae family.

Geographic Distribution and Habitat –
Closterotomus trivialis is an insect with a European spread. It is mainly found in Italy, Greece, Portugal, Spain and Yugoslavia.

Morphology –
Closterotomus trivialis is an insect that can reach a length of 6.6–7.9 mm
It has a fairly variable color body. In females the body is usually yellow and green, with a yellow-green head. Males can be red and black.
The pronotum usually shows two central and two lateral black dots.

Attitude and Life Cycle –
Closterotomus trivialis has been reported in the Mediterranean basin with the presence of infestations that can also cause serious damage to olive and citrus crops.
The insect makes only one annual generation (univoltine) on citrus fruits and overwinters at the egg stage in the cracks of the bark.
Females lay eggs in late spring.
The eggs hatch in the period from the end of winter to the beginning of spring and the larvae feed on the herbaceous species of the undergrowth, mainly the Urtica and Parietaria officinalis species; the Urticaceae are the main guests.
Adults instead feed on buds and often on young olive flowers.

Ecological Role –
Closterotomus trivialis carries out its trophic activity by pricking the buds and flowers of the olive trees, thus causing drying and dripping.
On citrus plants, insect bites lead to the emission of rubber from the affected organs, yellowing and dripping of the flowers, desiccation of the apex of the shoots and the occurrence of small necrosis and deformations of the leaf flap.
On pear trees the attack manifests itself with lithiasis on the fruits, that is with the formation of agglomerates with a stony consistency inside the pulp, thus depreciating the fruit.
The containment interventions of this insect, as for other myrids, must be agronomic and biological as insecticides interfere with the useful entomofauna and with mammals or birds.
Cultivation in interlock rows of crops particularly attractive for myrids, especially potato and green bean plants, must be avoided. Furthermore, a proper control of weeds in the orchard must be implemented.
It is advisable not to create excessively specialized plots of olive or citrus trees, adopting agroecological techniques, with the inclusion of other fruit trees.
It is also necessary to avoid the mowing of weeds in order not to cause the dispersion of the insect in the orchards.