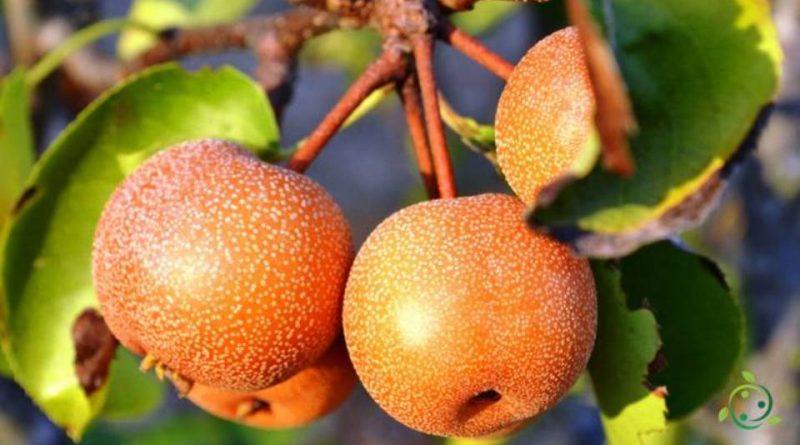 The nashi or Japanese pear (Pyrus pyrifolia (Burm.f.) Nakai, 1926) is a fruit tree of the Rosaceae family whose fruit is also commonly known as pear-apple or Asian pear.
This plant, well known in the East, where it has been cultivated for centuries, can be propagated both by seed and by cutting.
Propagation by seed gives rise to plants other than the mother plant and, obviously, with the achievement of the slower fruiting phase.
It can also be propagated by cuttings, whose technique is not very different from the production of a pear cutting but the propagation that gives the most reliance, both for quality and homogeneity of the crops, is that by grafting.
Usually we make grafts from split or crown seeds of Pyrus Communis or Pyrus pyrifolia, which allow to obtain very resistant plants, which adapt well to different soils and which are able to withstand drought quite well. However, if the pear tree is planted on calcareous soils, problems of yellowing and thinning of the leaves may arise, a phenomenon known as chlorosis.
As for rootstocks, nashi is totally incompatible with quince; the rootstocks that can be used for nashi are therefore:
– “Pyrus betulaefolia”, very vigorous, suitable for heavy, humid and alkaline soils, not very sensitive to drought;
– “Pyrus calleriana”, less vigorous, less resistant to cold and damp and calcareous soils;
– “Pyrus serotina” or “pyrifolia”, resistant to frost but fears heavy and humid soils;
– “Pyrus communis”, the less vigorous, adapts to all soils, both sandy and clayey.

It should also be remembered that nashi fruits have a yellow-green or bronzed skin and that bronze-fruited varieties are preferred in our markets. The pulp has different characteristics from one variety to another: crunchy, rather coarse in some, finer in others, sometimes fragrant, generally juicy, quite sugary but with average low acidity.
Finally, among the numerous varieties spread the most important are of Japanese and Chinese origin because they are the areas where it is most cultivated.
The cultivars differ in the shape of the fruit, the color, the ripening period and the size, among these we mention:
– Chojuro (Japan, 1893);
– Nijisseiki (Japan, 1898);
– Niitaka (Japan, 1927);
– Shinko (Japan, 1941);
– Kosui (Japan, 1959);
– Hosui (Japan, 1972);
– other varieties are: Shinseiki; Shimseiki and Tama.