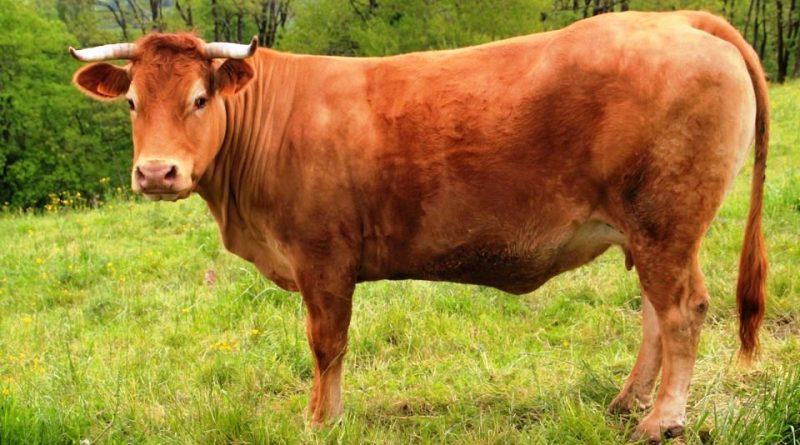 The Limousin is a bovine breed (Bos taurus Linnaeus, 1758) originating in the ancient Limousin region of France for the production of meat.

Geographical and Area Distribution –
The Limousin is a bovine breed originally from the region of France located almost entirely on the Central Massif, with the capital Limoges, called Limousin (in French Limousin) and which from 1 January 2016 has merged into the Aquitaine-Limousin-Poitou-Charentes region that has then taken the definitive name of New Aquitaine.
The breed still has an average rusticity and in any case has spread to many European countries, such as Italy and Great Britain but also overseas as in the United States.
In France, however, it is the second beef breed, after the Charolaise.
In 1987 the National Association of Charolaise and Limousine Breeders A.N.A.C.L.I. was founded in Italy

Origins and History –
The Limousin breed has evolved, as mentioned, in the French Limousin region in the areas of the central French massif, an area with great climatic variations and in hilly and mountainous areas characterized by granite and predominantly acid soils.
The area develops between 200 and 700 m above sea level, where once a breed was a working breed and today improved becoming one of the most important breeds in France for the production of meat
Factors that led to the development of an average resistant breed that can be adapted in various areas on condition of ensuring suitable hygienic conditions.
In fact, the Limousin region is an area characterized by a rather harsh climate, with hot summers, harsh winters and abundant rainfall. The breed, however, has a remarkable ease of acclimatization, so it is also bred outside the country of origin.
This breed, which in the past was dual-purpose (work and meat) was then improved making it more suitable for meat production.
DNA studies have identified close genetic relationships between Limousine cattle and other breeds in southwestern Europe. According to a study, a possible common origin or a recent gene flow between the Limousine and Charolaise cattle breeds would hesitate; still others indicate a closer genetic relationship between Limousin, Gasconne, Aubrac, Bazadaise, Salers and Blonde d’Aquitaine.
Historical studies speculate that the origins of the Limousin breed can be traced back to the blonde Garonne breed in the 5th century AD. Incidentally, the Garonne breed from south-western France was merged with the Blonde d’Aquitaine breed in 1962.
The Gasconne breed, with which the Limousin cattle have a close genetic relationship, would have arrived in south-western France with the Visigoths around the fifth century AD.

Morphology –
The Limousin is recognized for its lively, not too heavy, fromentino coat, lighter in the ventral and perineal regions.
It has a discolored halo around the eyes and muzzle and the mucous membranes are pink depigmented.
The horns are clearer, of medium length and facing forward.
They are robust, energetic animals of medium height and medium-high live weight, with an average height of 145 cm at the withers, with the females weighing on average 6.5-8 quintals and the males 10-12 quintals.
It also has thin skin, short and broad light head, light skeleton, short and muscular neck, thick and muscular shoulders and thighs, short and muscular limbs, long and cylindrical trunk.

Productive attitude –
The Limousin is a breed that has a good meat production, while that of milk is sufficient only for the needs of the calf. It is one of the three breeds (the other two are the Blonde d’Aquitaine and the Bazadaise) which contribute to the generation of beef oxen called Chalosse, typical of the homonymous region.
It is in general a breed with non-high rusticity, however, difficult to adapt in unfavorable conditions, with susceptibility to diseases and dysmetabolies.
It has a good maternal capacity, ease at farrowing (97-98%) with calves that are small in size at birth; fertility is 94%.
As for the production of meat: the veal weighs 6.5- 7 ql at slaughter. at the age of 20-24 months, with slaughter yield 63-65%; the I.P.M.G (average daily weight increase) is 1200 – 1350 g. I.C.An (food conversion index), with 6.6 kg of dry matter.
The meat is of good quality, with early ripening (8 months).
The breed also plays an essential role in the practice of industrial crossbreeding for the production of subjects to be fattened and destined for slaughtering at a few months of age. Bulls are used in industrial crossings to obtain high performance F subjects. The Limousin breed is mainly bred on pasture.