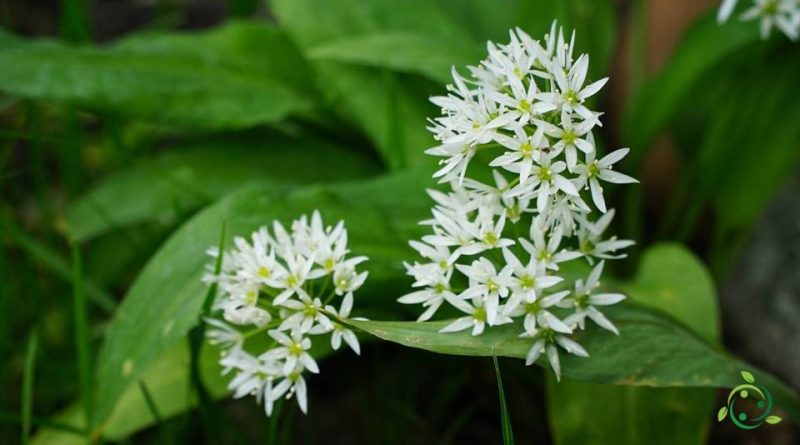 Characteristics –
Wild garlic is a bulbous, not very tall, with white flowers and large, delicate and silky leaves, with a pungent smell of garlic.
This plant is often found in the woods, sometimes in thick and dense populations; however, due to its remarkable resemblance to poisonous plants such as lily of the valley and autumn colchicum (called false saffron), there are cases of poisoning associated with harvesting errors.
Due to its multiple pharmacological and culinary uses, it is commonly harvested in the wild (especially in Europe).
Almost all parts of plants of this species contain pungent smelling substances; some authors have hypothesized that these volatile substances have the function of making them unattractive to natural predators. For this reason, since ancient times they have been used by man as aromatic vegetables, as happens for other similar species such as onion (A.cepa L.), garlic (A. sativum L.), leek (A. porrum The others. In ancient times in certain areas Allium ursinum was used as a common kitchen garlic.
With wild garlic you can prepare a sauce that can replace pesto as a condiment.
Some manuals recommend mixing the fresh aerial parts of the plant in the salad as a purifying treatment against skin rashes. The industry makes disinfectants and repellents from this plant.

Nutritional factsheet –
The composition of the wild garlic bulb includes:
– Water 63%;
– Carbohydrates 27%;
– Proteins 6%;
– 3% fiber.
There are also vitamins, minerals, antioxidant enzymes, etc.
Wild garlic contains some active ingredients with pharmacological action, all concentrated in the sulfur essential oil. Among these, the most important are:
– Alliisin: sulfur glucoside;
– Alliinase: enzyme;
– Vitamins: especially C (ascorbic acid) and B1 (thiamine).
It also contains other useful compounds, such as: prostaglandins, acid-phenols, phytosterols, polyphenols, flavonoids.