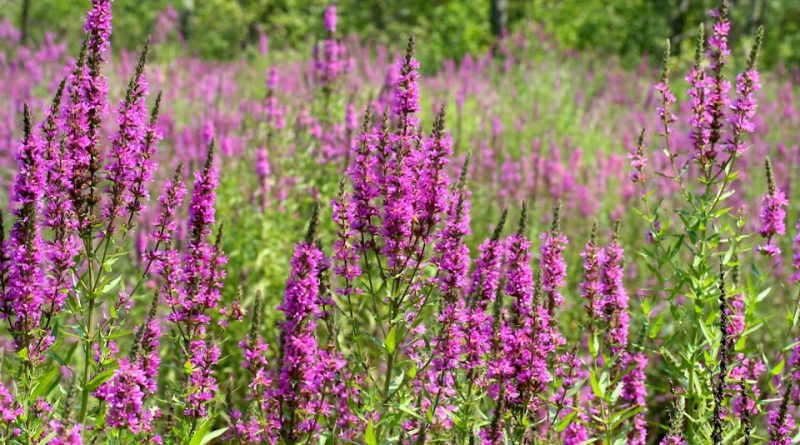 Etymology –
The term Lythrum comes from the Greek λύτρον lýtron, the name of a plant mentioned in Dioscorides; according to most of the authors it would derive from λύθρον lýthron congealed blood, a questionable reference to the color of the flowers.
The specific epithet salicaria comes from the genus Sálix, willow: which grows in the same environments as willows.

Geographic Distribution and Habitat –
The Purple loosestrife is a plant native and widespread in Eurasia and North Africa. It is present in a vast range that includes Europe, up to the north, at the latitude of Great Britain, from south to northern Africa, from east to western and northern Asia. It is also present in North America.
Its habitat is that of reed marshes on the edges of slow-flowing lakes and rivers, but not in the presence of acidic soils.
In Italy, for example, it is quite common in particularly humid places up to 1200 m, along streams and calcareous soils. 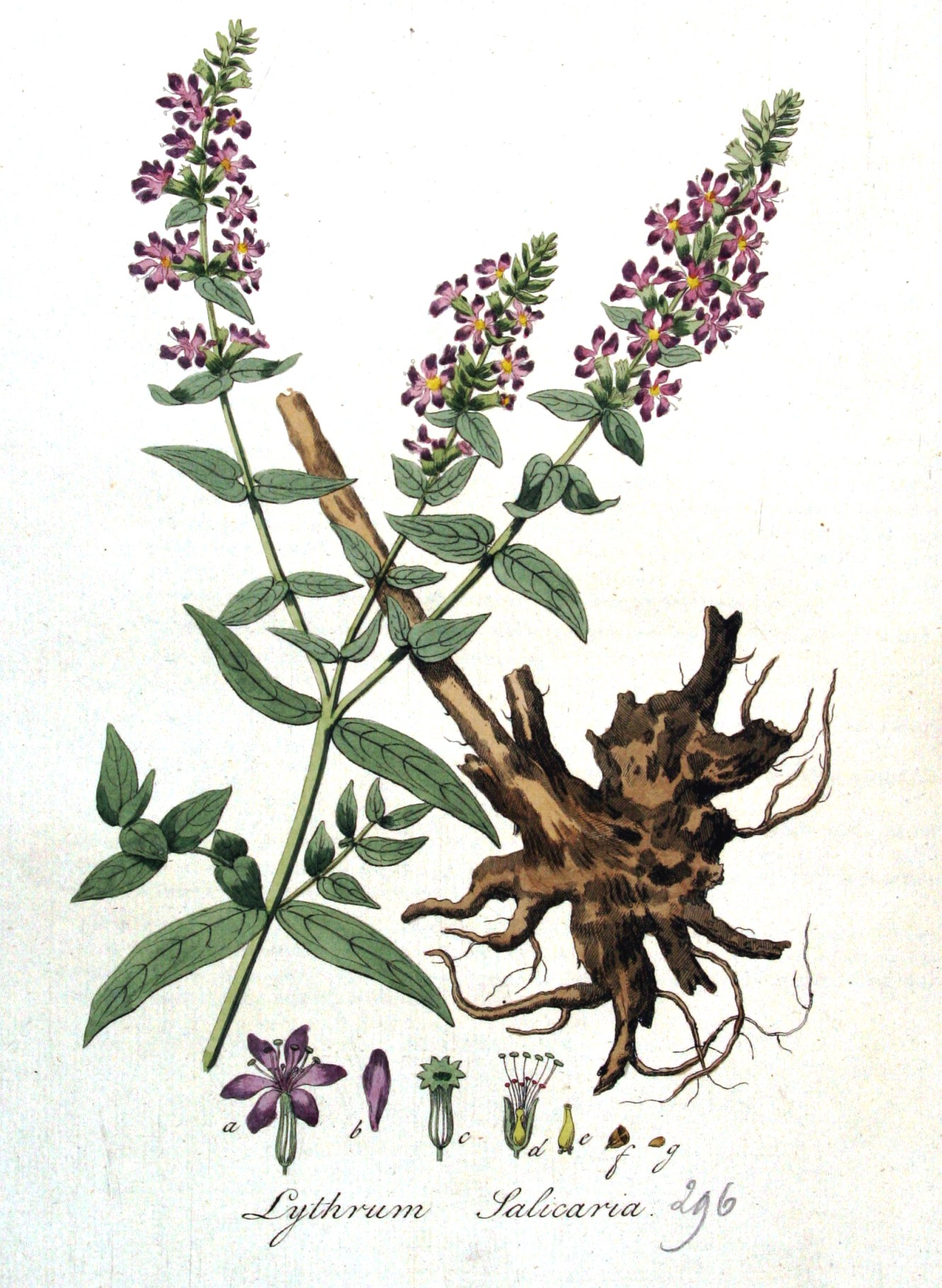 Description –
Lythrum salicaria is a perennial, tormenting gray herbaceous plant that can exceed one meter in height.
it has an erect tetragonal stem.
The leaves are opposite or placed radially with respect to the axis in symmetry and placed at the same height.
The flowers are carried in an apical spike inflorescence and have 6 petals with a swollen cylindrical calyx, gray-tormenting or reddish; the corolla is 12-15 mm large with elliptical linear, acute, pinkish purple petals.
The flowering period is between June and September.
The fruit is a denticidal capsule, 3-4 mm ovoid, which does not exceed the floral tube, numerous seeds of 0.60 – 1 mm, with a triangular outline, brownish.
Seeds can be dispersed by water (hydrocore dissemination).

Cultivation –
Lythrum salicaria is a perennial that is harvested in its natural state for local use as a food, medicine, and source of materials.
It is a plant that can be grown in soils especially if they are humid.
It grows well in heavy and swampy clay soils and also develops in the presence of shallow waters at the edges of the ponds.
Needs full sun or partial shade exposure.
It is a very resistant plant, which tolerates temperatures down to at least -25 ° C.
Please note, however, that this species can be very invasive and has been declared a weed in some countries.
It can be grown as a great looking ornamental plant and is a good plant for feeding bees and butterflies.
The plant can be propagated by seed. Sowing should be done in autumn or spring in a sheltered place. When the young seedlings are large enough to handle they can be transplanted into individual pots or into the ground in late spring.
If you have enough seed, it might be worth trying direct planting in the fall or spring.
The plant can also be propagated by division of the tufts in early spring or early autumn. The larger tufts can be replanted directly into their permanent locations, although it is best to pot the smaller tufts and grow them in a cold greenhouse until they take root well. The transplant must always be done in spring.
Another propagation system is that through basal cuttings to be prepared in spring. In this case the shoots with abundant underground stem are collected when they are about 8 – 10 cm from the ground. These should be placed in individual pots and kept in partial shade in a greenhouse until they root well. They must then be transplanted in late spring.

Customs and Traditions –
The Purple loosestrife was used over the centuries for its astringent properties against dysentery and until the nineteenth century there was no lack of descriptions to this effect in medical books. During the First World War it was also used by German troops in the treatment of typhus fever.
It is a medicinal herb and a medicinal herb but which is also used in the food sector.
The leaves, as well as the roots, can be eaten cooked.
An edible dye is also obtained from the flowers.
As for use as a medicinal plant, it is an astringent herb that is mainly used as a treatment for diarrhea and dysentery. It can be safely taken by people of all ages and has been used to help stop diarrhea in babies who are breastfed.
It can also be used to treat intermenstrual bleeding.
Modern research has shown that the whole plant is antibiotic and particularly effective against the microorganism that causes typhus.
The flowering plant is antibiotic, highly astringent, hypoglycemic, hemostatic and vulnerary.
It is appreciated as an intestinal disinfectant, especially in cases of enteritis.
Among other uses, a decoction is prepared from the plant for impregnating wood, ropes, etc. to prevent them from rotting in the water.
The leaves contain about 12% tannin, the stems 10.5%, the flowers 13.7% and the roots 8.5%. It is probably these tannins that preserve the wood and other materials.
In the flowering tops normally used, the main components are: tannins, pectins, mucilages, among the sugars Salicarin, carotenoids, phytosterols and iron.
From an ecological point of view it is a melliferous plant much visited by bees, which collect abundant pollen and nectar. They are also very important plants for bees because they bloom in summer, when floral resources are often very limited.
However, this plant has been included in the list of 100 of the most harmful invasive species in the world.

Preparation Method –
The flowered Purple loosestrife is harvested in summer and can be used fresh or dried.
An infusion is prepared from the plant which is used internally in the treatment of diarrhea, internal bleeding, excessive menstruation, etc.
The plant is used externally as a cleansing and healing agent for wounds, sores, impetigo, eczema, excess vaginal discharge, vaginal itching, etc.
The powdered plant is used as a hemostatic in case of severe nosebleeds.
The stems are considered gum stimulators and are given to children to chew to strengthen weak or bleeding gums.
Internally it has an astringent and antidiarrheal action. As a fluid extract in the form of a mouthwash it is soothing and anti-inflammatory of the oral cavity or is used for vaginal douching.