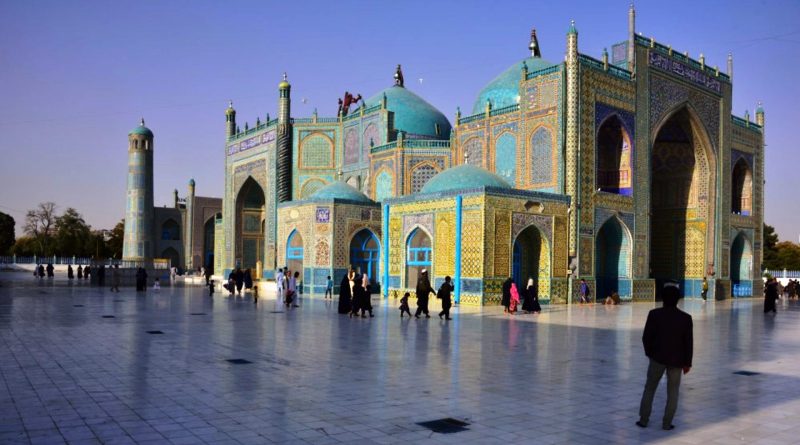 Afghanistan is a state with an area of ​​652,864 km² and a population of 38,041,754 inhabitants as of 2019.
This landlocked country borders Iran to the west, Pakistan to the south and east, Turkmenistan, Uzbekistan and Tajikistan to the north, and China in the nation’s easternmost region (corridor of Vacan).
The capital of Afghanistan is Kabul which, as of 2015, had 3,678,034 inhabitants.

Geography –
From a morphological point of view, Afghanistan has a predominantly mountainous territory, in the north-eastern part of the country there is the Hindu Kush mountain range, one of the highest in the world.
This country, landlocked and mostly mountainous (80% has an altitude between 600 and 700 m), the territory is dominated by the Hindu Kush, which cuts the country in two: towards the north-east the system joins with the Pamir and Karakorum massifs, while to the south-east it joins the Sulayman mountains, where the Khyber and Bolan passes open up, access routes to India and important “historical gates” of the ‘Asia. Towards the north-west the reliefs slope down into the plain crossed by the Amu Darya river, while towards the south they leave room for predominantly desert areas and large marsh basins.
The Hindu Kush continues west with the Koh-i-Baba massif connected to the marginal reliefs of Iran; further south, it fan out into a series of parallel chains that slope down towards the desert plateau of Rigestan (or Registan) and the saline depression of Sistan. In the northern extremity of the country extends a limited flat area – the historical region of Bactria or Afghan Turkestan – bordered by the Amu Darya.
In Afghanistan most of the rivers (Helmand, Hari Rud, Morghab) originate from the central ranges and flow into the southern desert basins, with the sole exception of Kabul, a tributary of the Indus. There are also torrential rivers that are not of important importance and are not always sufficient to meet the water needs of local agriculture.

Climate –
The climate of this country is characterized by a harsh winter and a hot summer. In winter, the temperature can drop to -15 °, and this is also the wettest period of the year. Summer is characterized by a very hot and dry climate, less in altitude where the evenings are cool. The best months for travel are April, May and October. The strong aridity that characterizes this region is caused by a continental type climate, with frequent dry winds and strong temperature variations, both diurnal and seasonal. In Kabul, temperatures range from -1 (January average) to 23 ° C (July), with just about thirty days of rain per year. The arid and barren landscape is dominated by the steppe, exploited as pasture; the small forest areas are limited to the southern slopes of the ranges along the Pakistani border, which benefit from the monsoon influence. 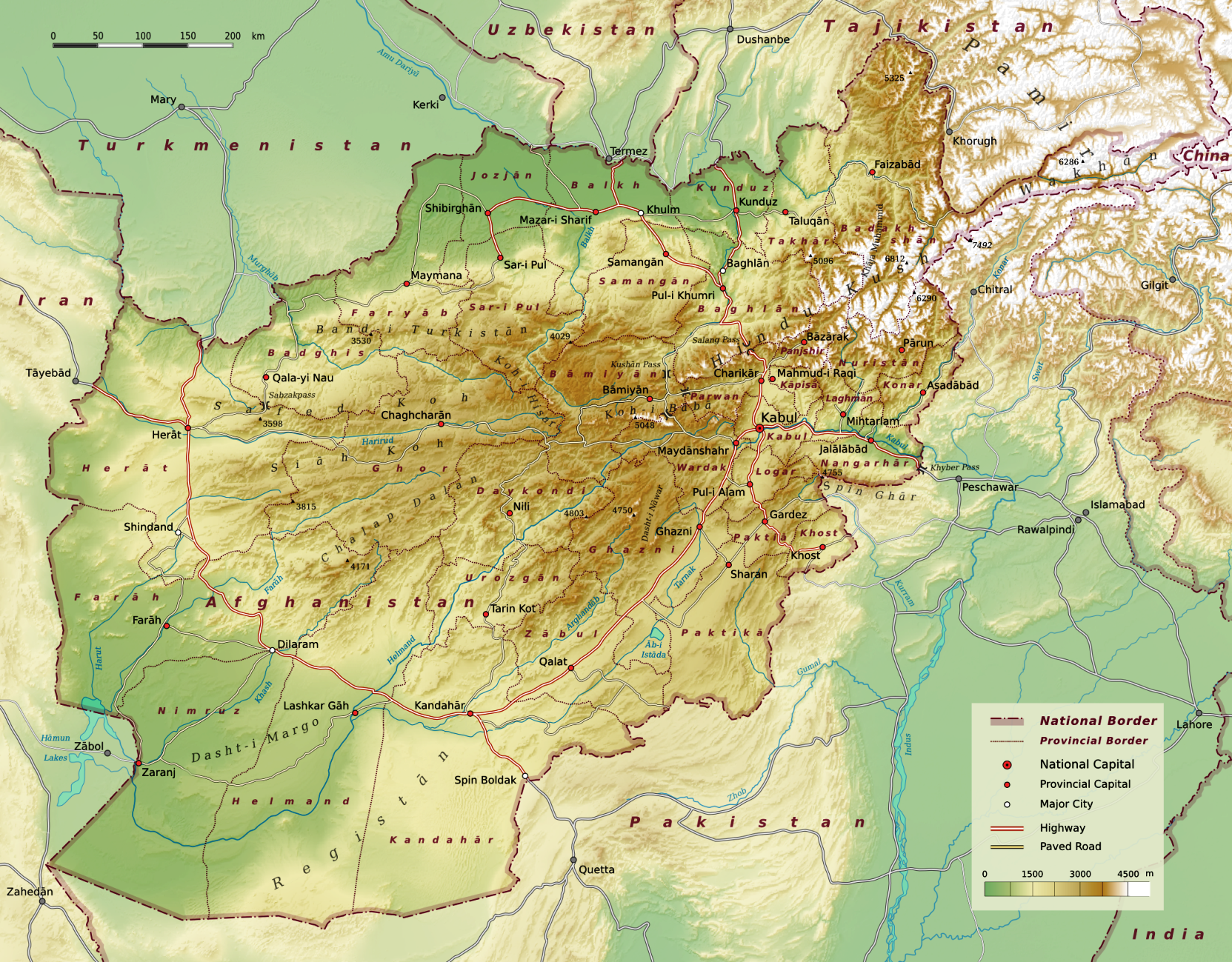 Flora –
The vegetation of Afghanistan is affected by the variability of areas of the country ranging from arid to forest. The eastern mountain slopes are the greenest area of ​​the country, with pine forests and mixed forests of oaks, junipers and pistachios. All Afghan forests are threatened by logging, and it is estimated that over the past 25 years the forest cover has shrunk to about 0.5% of the country’s territory – or one sixth of what it was in the past. The northern plains are arid and seem lifeless, but instead hide fertile soil that blooms every year with the rains between April and May, transforming these sprawling remains into a green carpet strewn with tulips and gentians. The southern deserts, on the other side of the mountains, are rarely affected by this rainfall and their vegetation is generally limited to a few thorny shrubs, mimosas and artemisias.

Fauna –
Afghanistan has a significant fauna, although in recent times there has been a contraction due to various factors, not least those of war.
The most famous Afghan animal is Marco Polo’s sheep (Ovis ammon polii), named after the first traveler who described it to the Western world. One meter high at the back and with a pale gray coat, this mouflon species has gigantic spiral horns that can reach one and a half meters in length. It is a kind of mountain, present in the Wakhan Corridor and also in Tajikistan, in the Chinese province of Xinjiang and in northern Pakistan. Marco Polo noticed that the local shepherds left horns and bones to mark the paths, a bit like the Wakhi and Kyrgyz do today. There are also numerous other species of beautiful mountain sheep and goats, which are currently almost all limited to Badakhshan and other provinces bordering Pakistan: among these we should mention the markhor, with its characteristic spiral horns, the urial sheep and the magnificent Siberian ibex.
Before the war, these species were widespread throughout the country. The goiter gazelle, which lives in the desert and was hunted by the Mughal emperors, is now in danger of extinction in Afghanistan. Where there are prey there is obviously no shortage of predators. The snow leopard is one of the most famous animals, while the common leopard is widespread in a few specimens throughout the Afghan territory, in the hilly areas, in the mountains and in the plains. In similar habitats live the gray wolf, now reduced to a few pairs or family groups rather than (as one might imagine) in numerous herds, and the jackal. The brown bear still lives in Badakhshan and Nuristan, but the number of surviving bears is unknown. Similar to the previous one, but smaller, the black bear is attested in some rare specimens in Nuristan. In the past, Afghanistan was also home to numerous Caspian tigers (a species now completely extinct), which lived in the swamps and forests along the Amu Darya, and the Asiatic cheetah, which was used to hunt gazelles. Small herds of striped hyenas are still present in the scrub and deserts of the south. The rendered macaque is the only extant primate in Afghanistan and lives in the forests of Nuristan.
In total, over 460 bird species have been recorded in Afghanistan, and nearly 200 nest in the country. Most of these are Paleartic species (of European origin, from the Mediterranean and from the north of Asia), with a significant number of species from the Indian subcontinent. Common birds include the maina, the wild pigeon, the bulbul and the buzzard, while crows and choughs are regularly sighted in the mountains. Among the large birds of prey, the monk vulture and the gigantic bearded vulture, both of which live in isolated mountain areas, deserve a mention. Birds of prey have been a prized commodity for some ethnic groups, and are still captured for hunting or for sale to Arabs. Afghanistan constitutes an important corridor for migratory species of aquatic birds, while the southern area of ​​the country has always been one of the wintering places, from which in spring and summer many species head north, beyond the Salang Pass: yes it ranges from small ducks and waders to larger species such as storks; The Siberian crane has not been sighted for several years.