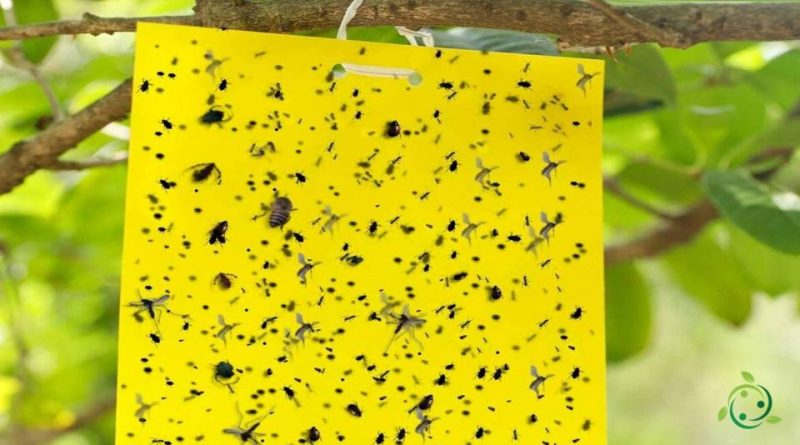 The chromotropic traps for insects are those that carry out their activity by attracting insects through color.
These traps exploit the principle that many insects are attracted to light radiation of certain wavelengths; generally they range from green, to yellow and white. For example, green attracts the winged forms of many Aphids, white attracts Tentredinids, yellow attracts many insects of the Diptera, Hymenoptera and Rincoti orders.
The chromotropic traps are very useful for monitoring purposes, unlike the chemotropic ones whose efficiency can be conditioned by environmental factors or by a variability due to persistence.
Unlike chemotropic traps, however, chromotropic traps have a much lower reason for action, which is why their efficiency of action depends on the density present in a given area.

In addition, chromotropic traps must often be placed at certain exposures to achieve greater efficiency towards the insect that you want to attract and capture.
The capture obviously takes place with a sticky substance to which the insect remains irremediably attached.
In general, chromotropic traps now have only one use for monitoring as, for mass capture, they have been overcome by chemotropic traps which demonstrate higher efficiency and selectivity.
Mass trapping with chromotropic traps was used above all in the seventies but the considerable progress made in recent decades in the field of chemical attractants, with particular reference to pheromones, attribute historical importance to the use of chromotropic traps in mass trapping.
However, for small plots or for a few plants, chromotropic traps can still play an important role in containing some insects on the condition that the trap is always kept efficient and that the adhesive is continuously cleaned and replaced.