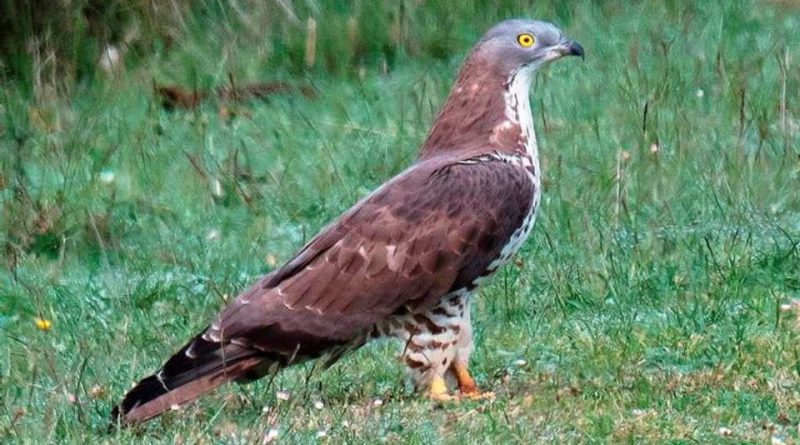 The European honey buzzard (Pernis apivorus (Linnaeus, 1758)) is a diurnal bird of prey belonging to the Accipitridae family.

Geographic Distribution and Habitat –
The European honey buzzard is a bird that makes long-distance migrations.
It spends the winter south of the Sahara and comes to Europe in spring to nest, passing mainly through the Strait of Gibraltar, Sicily and the Strait of Messina, and Turkey.
This species reproduces in most of Europe and is widespread, in the east, as far as Lake Balkhash and the Ob River, but is not present in much of Scandinavia and the British Isles. It is also missing in southern and insular Italy, in Greece, in much of the Iberian peninsula and in the islands of the Mediterranean.
Its habitat is represented by wooded areas, full of large trees, but also in clearings or in more open territories, alongside roads or waterways. At the end of the breeding season, honey buzzards migrate to central or southern Africa. When migrating, they often fly in large numbers, not in real flocks, but rather in continuous flows, which follow very specific itineraries: along the shores of lakes, for example. They cross the Mediterranean at Gibraltar or other points where the sea crossing is as short as possible, swarming in the crossing when the weather conditions are favorable. Many birds therefore cross the Strait of Gibraltar, the Strait of Messina or the Bosphorus on their journey to Africa.
In Italy it is a migratory species, present from April-May to September in the Alps (up to over 1500 meters of altitude). 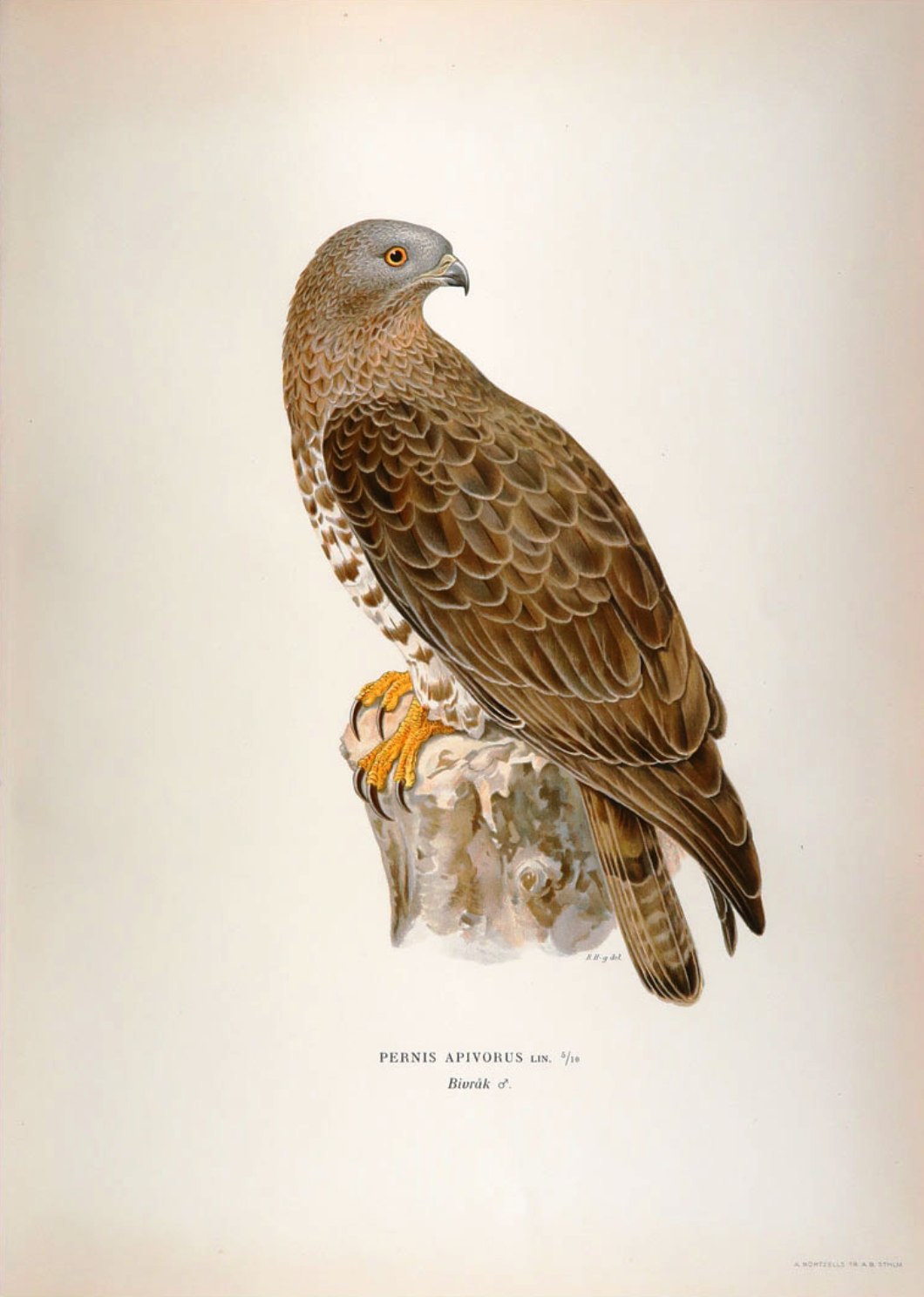 Description –
Pernis apivorus is a bird of prey with a total length of 52-60 cm, a wingspan of 125-143 cm, for a weight of 625-1.050 grams.
It is a bird with a different appearance, passing from the juvenile phase to that of an adult individual and, normally, with the female larger than the male.
As an adult, it is recognized for having gray sides of the face.
In the lower part, the external primaries have black tips and a clear line of separation with the remainder of the whitish feathers. The lower face of the secondary is instead whitish in color with a wide dark subterminal band and a large non-barred space between this and the other bars.
Observed in good light conditions, the upper parts have a grayish tinge, the wing has a dark rear margin and the tip of the primary coverts dark. The lower parts have a variable amount of dark spots or thin stripes on the chest and dark stripes on the belly and sides, but they can also be completely devoid of any markings. From above, the tail features a broad dark subterminal band and two thinner dark bars near the base.
In the young individual, generally, the head is quite light, sometimes completely white in color, but always with a white forehead. The upper parts are dark brown, with a light panel on the upper face of the primaries, with the pale tip of the large upper wing coverts and with the pale upper caudal coverts forming an evident “U”. On the underside of the outer primaries the dark color extends beyond the outer half of the pen and the base is whitish. In the new plumage, the secondary and internal primaries have broad clear tips. The lower face of the secondary is brown, these contrast with the whitish primary and form a dark spot in the underwing of flying individuals. The large secondary lower coverts are lighter than the secondary and other coverts, often resulting as a chamois-colored bar crossing the underside of the wing. The lower parts are streaked. From above, the tail can present both four dark bars, equally spaced but less evident, and the drawing of the adult female.
The legs are yellow, with little hooked nails.
The beak is short, hooked, with slit nostrils, gray or black, with yellow (young) or black (adult) wax.
In general it is a bird with a more massive and heavier body than those of the crow, similar to the buzzard.
The flight is slow, beaten or glided, often circular, exploiting the thermal currents; he rarely does “holy spirit”. He also often moves his head from one side to the other; while maneuvering it moves its tail like kites.
The honey buzzard emits a sharp kii-er completely different from the wailing note of the buzzard, or even a quick ki-ki-ki.

Biology –
The European honey buzzard reaches sexual maturity around 3 years of age. While the maximum longevity found was 29 years in a ringed specimen.
The courtship, similar to that of the Eurasian buzzard, takes place by swooping down and rising several times as if to follow a road full of bumps and bumps. Then, at the height of the ascension, the honey buzzard hovers for a few seconds and flaps its wings on its back two or three times, in rapid succession. Both birds can also climb quite high above the nest, so the male dives on the female.
The breeding period is from May-August. This bird nests in trees, even in nests abandoned by large birds. The honey buzzard generally builds a new nest, but can also reuse a Corvid or Eurasian buzzard nest.
The nest is usually built on a lateral branch of the trees 10-20 m above the ground; it consists of small branches and twigs that still bear the leaves. The construction of the nest is essentially carried out by the female, who completes this work in 10-15 days.
The nesting site is located within the boundaries of a territory whose size (10–40 km²) is determined by the quantity of food resources in the vicinity of the nest. The boundaries of this territory may overlap with those of a pair of nearby honey buzzards, but the surroundings of the nest are fiercely defended by all kinds of birds of prey. It also tends to return to the same nesting sites every year.
It lays 1-3 white or brownish eggs with dark spots. The incubation lasts about 30 days (one brood per year). Male and female hatch the eggs in turn (it seems that the female is more assiduous in this task and that she takes care of the incubation during the night). It has also been observed that if the female dies, the male is able to carry out the rearing of the young by himself.
During the first 7-10 days, almost exclusively the female takes care of the young. The male then goes away in search of food, mainly fragments of honeycombs of wild hymenoptera swarms, which the female will crush with her beak to feed the nestlings with the larvae contained inside. From the 18th day, the chicks are able to extract the larvae by themselves from the honeycomb fragments carried by the two parents, who deposit the food in the nest. Other prey, especially small vertebrates, are often cut into small pieces before being taken to the nest.
The offspring are nested and fly away at about 40-45 days, however they still remain for some time near the nest, where the parents continue to feed them until they are about 55 days old. Shortly after, they abandon the nest, but they become completely independent around 75-100 days.
The honey buzzard lays only one brood per year; if the first brood is destroyed, the female may lay a replacement brood, but this seems to happen very rarely.

Ecological Role –
The European honey buzzard was first described by the Swedish naturalist Carl von Linné in 1758 with the initial name of Falco apivorus.
The term apivorus derives from some of its eating habits; in fact it is called in German Wespenbussard, that is to say «buzzard of the wasps», and this would be a more appropriate name, especially as regards its fundamental food which is represented by wasp larvae. Occasionally, he also eats honey and wax. It has often been seen pulling out combs from large wasp and bee nests, as well as from smaller hornets’ nests. However, the greatest interest of honey buzzards in honeycombs is represented by larvae and pupae. By doing so, however, they risk being stung by bees and worker wasps. The plumage undoubtedly provides sufficient protection and these birds are also provided with special feathers, similar to scales, around the eyes and at the base of the beak.
In general, however, it feeds mainly on insects (larvae and pupae of wasps as mentioned), even if in winter (but not only) it does not disdain small reptiles and amphibians, eggs, small birds and small mammals.
It is a bird with mainly diurnal habits, which lives alone or in pairs.
Regarding its population, in Europe, although those of Finland and Sweden experienced some decline in the decade 1990-2000, the populations of Russia, Belarus and France are considered stable. BirdLife International and the IUCN include this species in the LC category (Least Concern, “minimal risk”), since the range it occupies is very large (estimated at 10 million km²) and its total population is large (between 100,000 and 1 million specimens). In detail, however, the species is still considered vulnerable in Italy, Switzerland and Portugal, and close to threat in Sweden and Norway.
Among other things, the concentration of thousands of birds of prey on the Strait of Messina, during the spring migration, led in the past to the birth of a traditional form of western honey buzzard hunting.
The honey buzzard undergoes hunting pressure, especially during migrations. It is also threatened by habitat degradation and the decrease in the number of its prey, due to the use of pesticides and climate change.
The species appears in Appendix I of the Birds Directive of the European Union, and since 1979 is partially protected by CITES in Appendix II (statute validated in 2003), like all Accipitriformes. It is also protected by the Berne Convention and the CMS (Bonn Convention, which protects all Accipitridae), in both cases in Appendix II, as well as by the African Convention on Conservation, where it appears in class B.