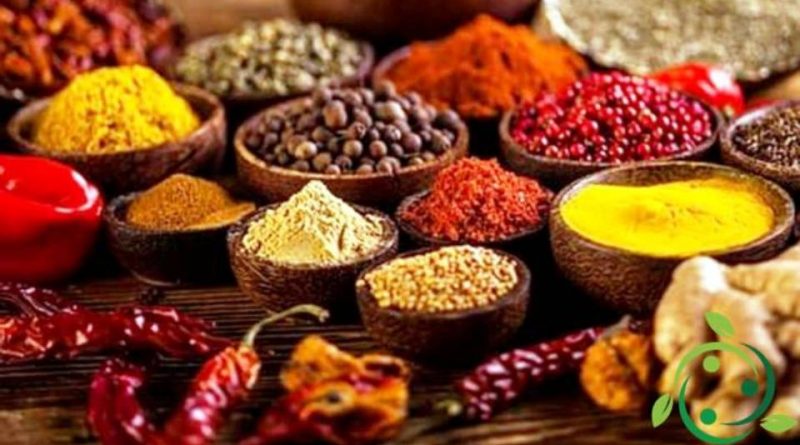 Baharat which in Arabic is: بهارات, whuch means spices, is a mixture of finely chopped spices used in various Middle Eastern kitchens.

Origins and History –
Baharat is a mixture of spices of Middle Eastern origin used in the cuisine of these countries; it has a sweet, pungent and slightly smoky aroma.
Obviously its composition is not standard and varies from country to country and from tradition to tradition and is used in particular in Lebanese, Syrian, Jordanian, Palestinian, Israeli and generally Middle Eastern cuisine.
In Syria, the term Baharat means a mixture consisting almost entirely of allspice and black pepper. In Turkey mint is added, in Tunisia rose petals and in the Persian Gulf areas (Iran, Saudi Arabia, Arab Emirates) saffron and lime zest are also added.
Usually the mixture of finely chopped spices is briefly fried in oil or clarified butter, before use, to intensify the aroma. Being very aromatic, a small amount is enough (one tablespoon per half kilo of meat).

Description –
Baharat is a mixture of spices, obviously, as mentioned, variable in place and tradition.
Baharat is a powdered condiment that can usually contain more than ten types of spices inside.
They range from various types of pepper (especially black pepper and long pepper), cinnamon, ginger, saffron, cardamom, paprika, cloves, coriander, nutmeg, cumin, turmeric, dried citrus peel, powdered rose petals, sumac, mint and many other potential ingredients, depending on local or specific variations for typical dishes.
Nono is present, however, the flavor agent or agents, and always comes in the form of very fine powder.

Active principles –
As is evident, it is impossible to have a standard data sheet of the nutritional values ​​and substances present in Baharat, not only for the variability of the ingredients and their concentrations but also for the difference in characteristics, often of the spices that compose it as they also come from somewhat different cultivation systems.
Obviously for the composition of the individual spices, refer to the data sheet.

Properties and Uses –
Baharaat, like any mixture of spices, has many ethnic or family variations; however, it is possible to identify some traditional mixtures with local diffusion:
– Classic blend: allspice, black pepper, clove, cinnamon, cardamom, coriander, caraway, nutmeg, paprika.
– Turkish blend: mint is added to the classic blend.
– Tunisian blend: rose petals are added to the classic blend.
– Kebsa or Baharat del Golfo: mixture used in the Persian Gulf. Dried lime (loomi) and saffron are added to the classic mixture.
With this powder composed of a thousand spices expertly mixed, you don’t just limit the flavor of your dishes. In many cases its most usual use is that of the main spice for seasoning meat, especially beef, then covered with baharat and left to mature.
But marinating is not the only use nor the main one. If you love making bread at home, or you want to prepare a focaccia, you can try adding a little baharat to the dough, to give a strong aroma to the whole, making the taste of the bread captivating and appetizing.
Baharat is also used for many types of marinade, with the addition of garlic, olive oil, honey or molasses and vinegar, replaceable with lemon juice. Being salt-free and non-spicy makes it one of the most used ingredients to give flavor to legumes, especially lentils, beans and chickpeas. In more modern culinary experiments, baharat is added to hamburgers to adapt its taste to the palate of Middle Eastern consumers.

Preparations –
To prepare the baharat you must have a pepper chopper or a coffee grinder; something that can reduce all your spices to very fine powder.
You can try experimenting a version of baharat on a classic basis, namely: 4 parts of pepper, paprika and cumin, 3 of cloves, 2 of cinnamon and coriander and the rest to taste, without exceeding a part so as not to alter the basic flavor too much.
Once you have chosen the percentage of the various ingredients, you must finely grind them all and mix them carefully. This mixture is then transferred to a glass jar, hermetically sealed and preferably stored in the dark. This will keep it well for about 6 months.
In the use for marinating, for a correct procedure, it will be sufficient to use it in proportion to the oil. Usually two teaspoons of baharat are added to a cup of oil, with a spoonful of lemon juice or vinegar, and salt to taste. This is at least the most used marinade for chicken, pigeon and lamb. After 24 hours in the fridge, the meat will have taken on a unique aroma.
As said, Baharat is usually used to flavor meat dishes (lamb, mutton, beef or chicken), fish or in soups; if you want to use it also in marinades for meat or vegetables, to season lentils or in pilaf rice dishes, for example to prepare a marinade for meat, you need to mix 2 tablespoons of Baharat, 1 tablespoon of lime juice (or lemon) and 100 ml of olive oil. At this point you have to mix this mixture together with the meat cut into pieces and let it rest in a bowl covered with plastic wrap for about 24 hours, before cooking it.
Another, among the many typical dishes that use this mixture of spices, is the chicken machboos, a traditional dish of Bahrain and chicken that has Baharat as an indispensable ingredient. For a marinade for chicken or lamb, you need to combine 2 tea spoons of Baharat, 1 tablespoon of lemon juice and 100 cc of oil. At this point you have to mix well and dip the meat into pieces for 24 hours.