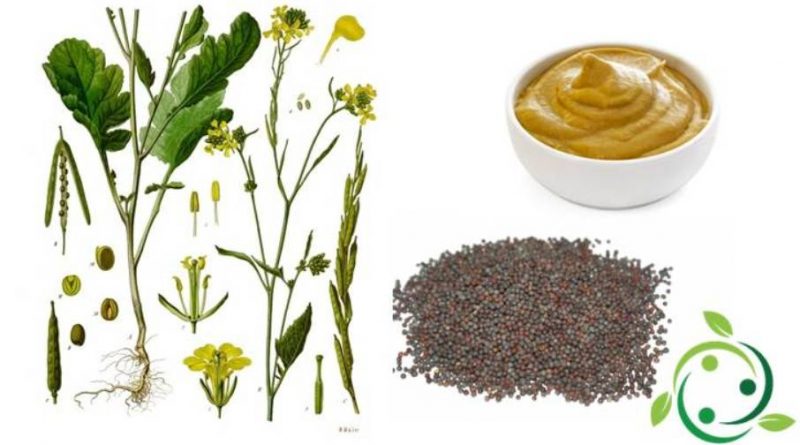 Mustard is a spice obtained from some species of the genus Brassica from whose seeds the famous sauce is obtained.

Origins and History –
Mustard in Europe has been known since ancient times and in any case it was already known since the times of the Greeks; the Romans instead knew its antioxidant properties and used it to preserve fruit, vegetables, fruit juices and wine must.
In France there is a great tradition of mustard, especially in Burgundy (especially in Dijon), where mustard sauce is supposed to have been invented, which is actually a mustard mustard.
Mustard sauce is obtained from small but tenacious seeds, capable of giving life to innumerable seedlings whose leaves and stems have always nourished the Eastern populations; these seeds are then transformed into smooth or grainy sauces, spicy or delicate.
Mustard also gives mustard vigor and character.
Its use has spread since ancient times when our ancestors discovered that, by chewing on the clear seeds of mustard, the meat was tastier and more digestible.
The Egyptians resorted to its digestive properties and as a condiment, attributing precious virtues to this spice.
It was known by the Jews, according to which Abraham served the angels with boiled veal tongue and mustard.
The Greeks attributed its discovery to Aesculapius, father of medicine.
The first documented recipe for mustard is also due to the Romans, in Columella’s De re rustica (1st century AD). The naturalist Pliny also dealt with mustard in Historia naturalis, focusing however on the therapeutic uses cited by scientists of classical antiquity, from Aesculapius to Hippocrates and Pythagoras. Just to the latter Pliny referred by talking about the ability of the mustard, chopped and mixed with vinegar, to cure poisonings caused by bites of snakes and scorpions or mushrooms.
The naturalist offered therapy for each affection. Toothache? Chew the seeds or, as Hippocrates suggested, apply a poultice. Sore throat? Gargle with mustard, vinegar and honey. Lumbago, shoulder or hip pain? Mustard compresses mixed with figs or closed between two cloths to avoid blistering, given the revulsive properties of the seeds.
As for asthmatics and epileptics, it is reported that mustard “revives their senses and their heads by causing sneezing” and also restores appetite when mixed with cucumber juice. Pliny’s list included a long and heterogeneous series of disorders: dermatosis, tetanus, alopecia, lethargy, mycosis, stones, bruises, bruises, female fatigue, stomach ailments, digestive problems. Modern herbal medicine has partially confirmed the ancient medicinal uses.

Description –
The name mustard indicates some species of herbaceous plants belonging to the Brassicaceae or Cruciferous family, from which different types of mustard are obtained.
– Brassica nigra, called black mustard, probably the first to be grown as a spice. In fact, seeds dating back to the Bronze Age were found in a stilt house on Lake Biel in Switzerland and in a Chinese prehistoric boat. It was widespread in Ancient Egypt and was exported to Europe and Asia. The Spaniards introduced it to the Americas. Its plants can reach 3 meters and the taste of the seeds, rather small, is pungent.
– Brassica alba (or Sinapis alba), known as white mustard or yellow mustard. Native to the Mediterranean, it has spread to temperate climate regions. The seed integument is yellow and the mucilage that forms when moistening is whitish, is therefore called white mustard in Europe and yellow mustard in North America. The plants reach 0.6 meters and its seeds are much larger than those of the other mustard plants.
– Brassica juncea, the brown mustard, also called Chinese mustard. Fruit of a cross between Brassica nigra and Brassica rapa, its plants are between 1 and 2 meters high. Its seeds weigh twice as much as those of black mustard and the taste is equally pungent. It originates from North Africa, India and Central Asia.
– Brassica arvensis, called wild mustard.
The mustard fruit has the shape of a long pointed pod, which encloses the spherical seeds which, depending on the variety, can be light or dark in color.
However, even with slight differences, the fruit develops from the yellow inflorescence in the shape of a cob, which contains numerous small and rounded seeds, from which the famous seasoning sauce is obtained, with a typically sour and spicy flavor.

Active principles –
Mustard berries abound with active ingredients that impart a spicy taste, responsible for the characteristic flavor and smell. These are glucosinolates (or thioglucosides), i.e. glucosides formed from a sugar part that binds to aglycone through a sulfur atom. By enzymatic hydrolysis (myrosinase) these substances release isothiocyanates, molecules with rubefacient, revulsive, lacrimatory, antioxidant and blistering action. In white mustard, in particular, we find the sinalbin, while in the black one the sinigrine abounds; the latter, by hydrolysis, originates isothiocyanate (or isozolfocyanate), which is distinguished by its spicier taste than p-hydroxybenzylisothiocyanate (freed from the hydrolysis of synalbine). For this reason, white mustard has a less spicy flavor than black mustard.
In whole seeds, the hydrolysis of thioglucosides does not occur because the enzymes involved are found in cellular elements other than those in which isothiocyanates are present; for this reason, the crushing of fresh seeds guarantees a better aroma than mustard flour.

Properties and Uses –
The culinary interest in mustard is mainly aimed at two botanical species of mustard, black mustard (Brassica nigra) and white mustard (Brassica alba).
The mustard seeds, as mentioned, are odorless and tasteless until they are subjected to a process of shredding and soaking in water: at this point they release an intense aroma and take on the characteristic spicy flavor. Both on an artisanal and industrial level, mustard seeds are kneaded with different ingredients (including vinegar, beer, wine) in order to form a grainy cream which, depending on the variety and processing, can be more or less spicy.
On the market there are different types of mustard, which are distinguished by processing and area of ​​origin: the country that boasts the longest tradition is France, where white mustard seeds are mainly used. Among the different qualities we mention Dijon mustard, very strong, Meaux mustard and Alsatian mustard, less spicy.
English mustard is a yellow powder preparation in which mustard seeds (white or dark) are mixed with turmeric. It is quite spicy.
Note the fact that in France and England mustard is called “Mostarde”, but it is a very different product from Italian mustard, made with candied fruit in a syrup in which we find a certain amount of mustard. Among the various Italian products, the most famous is certainly the Cremona Mostarda, together with the Mantovana one.
Beyond the culinary popularity, mustard is also used (albeit limited) in herbal medicine. For external use, its rubefacent properties are used (useful in the presence of neuralgia, rheumatism and muscle pain), while for internal use it is used as an emetic agent (at high doses induces vomiting) and digestive (stimulates gastric secretions); in the past, poultices were highly exploited in the presence of catarrhal cough.
In Eastern Europe, black mustard seeds are mixed with honey and taken to quell coughs.
The use of mustard for local applications can be irritating and blistering, to the extent of producing real skin lesions. Obviously, if these are already present, the application is completely not recommended; analogous speech in the presence of vascular disorders.
Sircorda however that mustard, due to the presence of specific proteins (agglutinin; Oleosin; Ara h 3; Ara h 4; Ara H 6; Ara h 2; Ara h 1; Ara h 7; Ara h 8), can cause food allergy in predisposed subjects.

Preparations –
As mentioned, the mustard sauce is a condiment made from mustard seeds (nigra or alba), with a partially liquid consistency, denser than ketchup and less compact than packaged mayonnaise. The appearance is characteristic yellow (between gold, green, gray and beige), so much so that there is a color called “mustard”.
To maintain its flavor, mustard must be kept in the refrigerator, even before opening the jar, which must be hermetically sealed every time.
Those available on the market are long-lasting, thanks to the nature of the ingredients that make them up and the presence of food additives; in parallel, the homemade mustard sauce (see Alice’s video recipe: Mustard Sauce) tends to oxidize more quickly but, in any case, it does not represent a substrate easily attacked by bacteria. Just think that, like other spices, mustard seeds have a certain preservative power.
However, there are various types of mustard sauce, different in the relationship between the ingredients and the spices. This balance changes both by brand and by type (sweet mustard, spicy mustard etc.).
In the kitchen, mustard sauce is used as a sauce or seasoning for fast-food, as an accompaniment to fresh meats (raw and cooked, such as tartare or fillets in sauté), to cover roasts and to formulate other more complex sauces. It is rarely used in fish-based recipes (for its very strong flavor), but often accompanies boiled egg-based preparations and, among the side dishes, goes well with boiled potatoes (see the recipe mustard potato salad) , fried or roasted.
Mustard can of course also be prepared at home. The recipe for making mustard sauce is quite simple. Obviously the ingredients can vary significantly; however, in general they are: mustard seeds, vinegar, sugar, salt, water and spices. The procedure is just as simple: you have to mix all the spices and mix them finely, hydrate the powder with water and vinegar to the right consistency, then mix again.