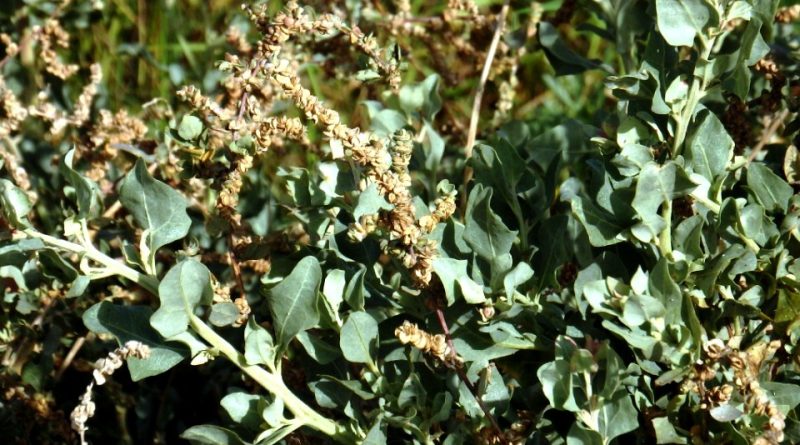 The Mediterranean saltbush (Atriplex halimus L.) is a herbaceous species belonging to the Chenopodiaceae family.

Etymology –
The term Atriplex comes from atriplex, a plant cited by Pliny taken from the Greek ἄτριπλεξ átriplex atriplice, cited by Dioscorides.
The specific epithet halimus comes from ἄλιμον alimon, the Greek name of the Atriplice in Dioscorides derived from ἁλς als sale, for the habitat by the sea.

Geographic Distribution and Habitat –
Mediterranean saltbush is a plant with a Mediterranean-Atlantic distribution.
In Italy it is present spontaneously in Liguria and in all regions of central and southern Italy except in Umbria.
In Spain it grows spontaneously in Zaragoza, Segovia, Madrid, Murcia, Cuenca, Albacete, Alicante and other provinces.
Its habitat is that of areas with high solar radiation and sandy soils. It is in fact a plant with a high ability to adapt to very arid climates, saline and marginal soils. It resists continuous exposure to the wind, in fact it is very common to find it on the coast. It is also resistant to frost up to -10 ⁰C, and grows in rocky environments, in hedges, along roads and in sandy uncultivated grounds, often on salty soils along the coasts, from sea level to about 600 m. 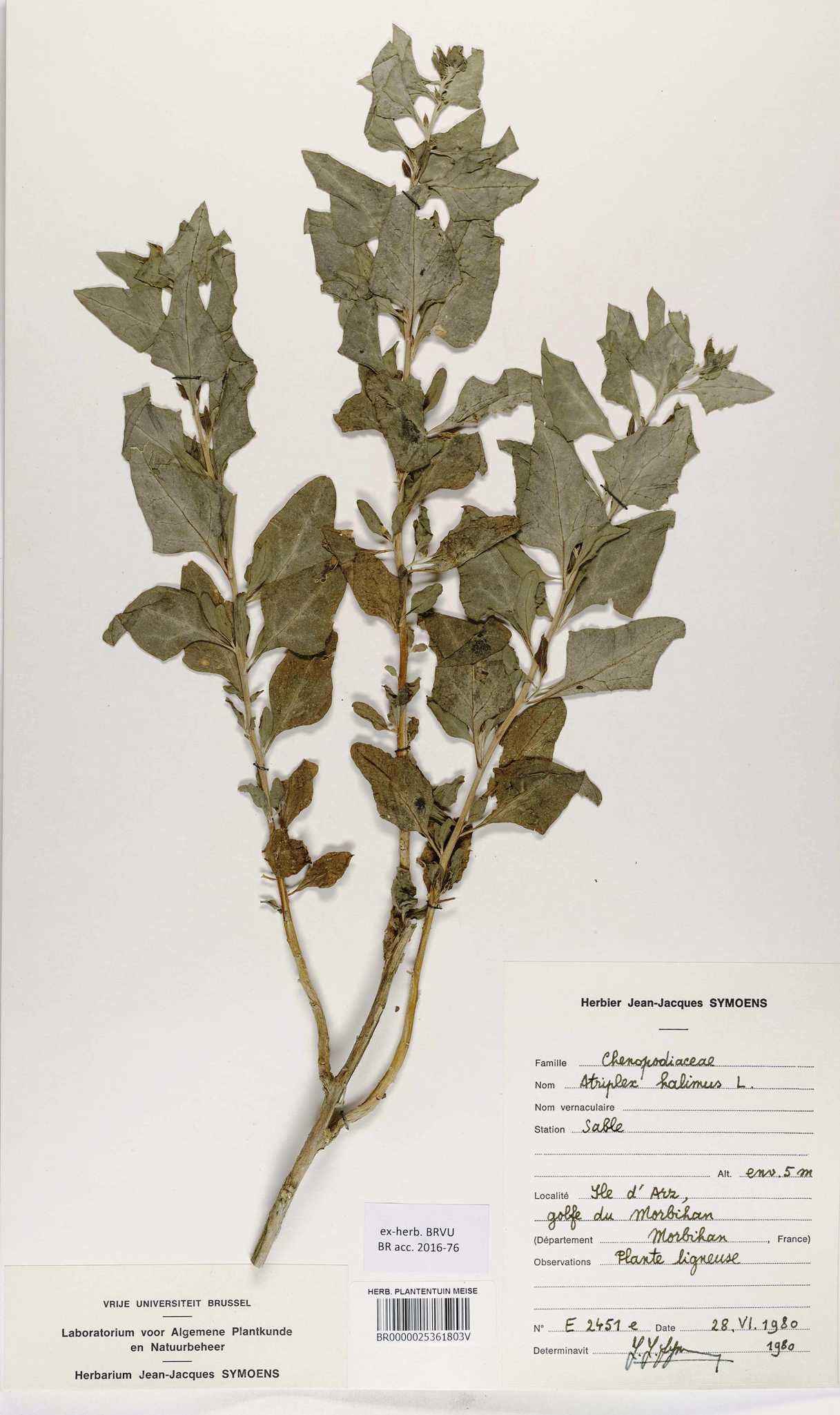 Description –
Atriplex halimus is a perennial shrub 2 to 3 meters high with very branched and tangled, smooth, somewhat cracked, ashy or grayish stems.
The leaves are whitish and wrinkled, alternating, ovate-lanceolate, subrombic, with a whole and somewhat wavy margin. The main ribs marked on the underside and up to four centimeters long.
The flowers are monoecious of a yellowish-greenish color pollinated by the wind, inconspicuous, pentamers and grouped in dense clusters in the shape of a spike.
The antesis is in summer – autumn, depending on the latitude, between July and October.
The fruits are monospermic; they are 6-8 mm diclesis, reniform to suborbicular in shape, whole or toothed, obtuse or acute, with smooth back, often arranged horizontally.
The seeds are 0.9-1.1 mm in diameter, orbicular, laterally compressed, brown.

Cultivation –
Atriplex halimus is a typical plant of the lower thermo-Mediterranean and meso-Mediterranean bioclimatic planes. It is present in perennial and annual basophilic xerophytic grasses: class Lygeo-Stipetea.
It grows in places with rainfall between 75-375 mm, although it can also vegetate in areas with higher rainfall. It is usually accompanied by other species of the same family such as Suaeda fruticosa, Salsola vermiculata, Atriplex glauca, etc.
It is a plant resistant to cold, salt and extreme drought.
It should be grown in full sun or partial shade, in pots or in the ground, in well-drained and dry soils; fears water stagnation in winter, resists up to -10 ° C; it does not fear the wind, salt and drought, it repels even after deep pruning.
Endowed with a rapid growth and an erect posture, it tolerates even quite important pruning well. Precisely by virtue of this vigorous development and its exceptional resistance to brackish winds it is often used in coastal gardens to create excellent windbreak hedges.
This shrub is easy to cultivate and has few pretensions as regards the type of soil. Given its coastal origin, it adapts very well to sandy soils and soils with high levels of salinity, but it can also adapt well to a calcareous soil.
As for the propagation it can be multiplied by cut. Seed multiplication begins with sowing between April and May.

Customs and Traditions –
Atriplex halimus, known by various names such as: Atriplice alimo, alimo, salt plant, Sea porcelain, Mediterranean saltbush and others, is a plant known and used for various uses since ancient times.
The leaves are edible both raw and cooked, as they have a pleasant savory taste. Given the spread of Atriplex halimus as a spontaneous plant in coastal areas, in ancient times the leaves of this plant were an important source of nourishment: it was in fact widely used both as a fodder plant and as a “famine” food.
Some parts can be eaten raw (in salads). By withstanding severe droughts, it prevents livestock death in extreme drought conditions. It is characterized by its palatability, its salt content and the absence of toxic components. As a forage crop, they give interesting yields of protein and carbohydrates. Taking into account the availability of water, these crops give high yields. It reduces flatulence and gas and its leaves usually have saline excretions which give them a rough touch. Furthermore, this salinity makes them plants that burn badly, and therefore it would be interesting to introduce them in areas with a high risk of fire.
They are also interesting plants as ornamental plants for coastal gardens and low water consumption and can become, under certain conditions, a very invasive plant.
The plant is also used in the medicinal field.
The sprouts and discards are burned to obtain a powder suitable for fighting stomach acid, the plant is considered suitable for the production of manna.
Among other uses, it should be remembered that it is a slow-growing shrub, drinkable as a hedge being able to throw back even when it is cut down to old wood; provides an excellent windbreak barrier; it needs little care and is not afraid of drought. The ashes of the plant are suitable for the production of soaps as they are rich in alkali.
It is also a plant that acts as a natural desalinator of the land and is used in environmental recovery projects.

Preparation Method –
Atriplex halimus is a plant, little known and used today, which, on the other hand, can have a wide use in the kitchen; it can be minced together with other spices or used in many recipes to flavor and salt dishes.
The leaves have an excellent salty flavor, they can be added to salads or cooked like spinach. The leaves retain their salty flavor even if grown inland, away from the sea. The leaves are available at any time of the year, attenuating the harvest in the winter phase.
The seeds are also used to thicken soups or mixed with cereals to make bread.
The leaves, as well as edible in salads, are excellent as forage for animals, especially in arid environments with saline soils.
It is also used as an ornamental plant in Mediterranean gardens.