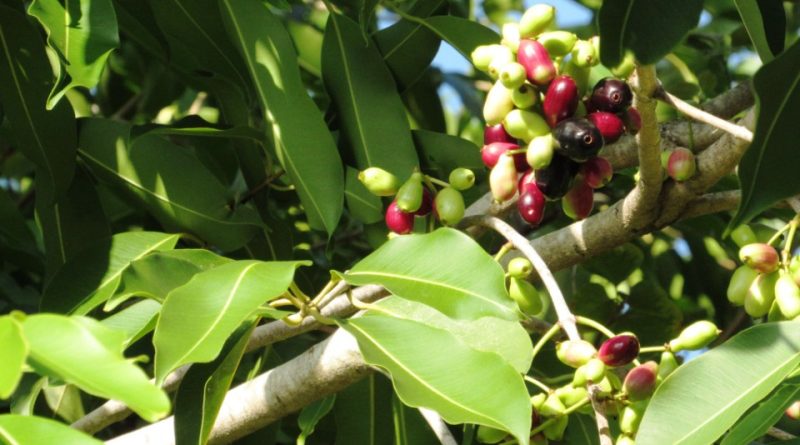 Geographic Distribution and Habitat –
Syzygium cumini is a tropical tree native to the Indian subcontinent, from the adjacent regions of Southeast Asia, including Myanmar, Sri Lanka and the Andaman Islands.
This plant has been introduced in some countries such as the islands of the Pacific and Indian Ocean, Australia, Hong Kong and Singapore. It has also been introduced in North America and the United States and is commonly cultivated in tropical and subtropical regions of the world.
Its habitat falls within most of India’s tropical and subtropical forest areas, ranging from evergreen broad-leaved trees to broad-leaved and coniferous trees, from wetlands to fairly dry ones, near the coast and even in swamps. 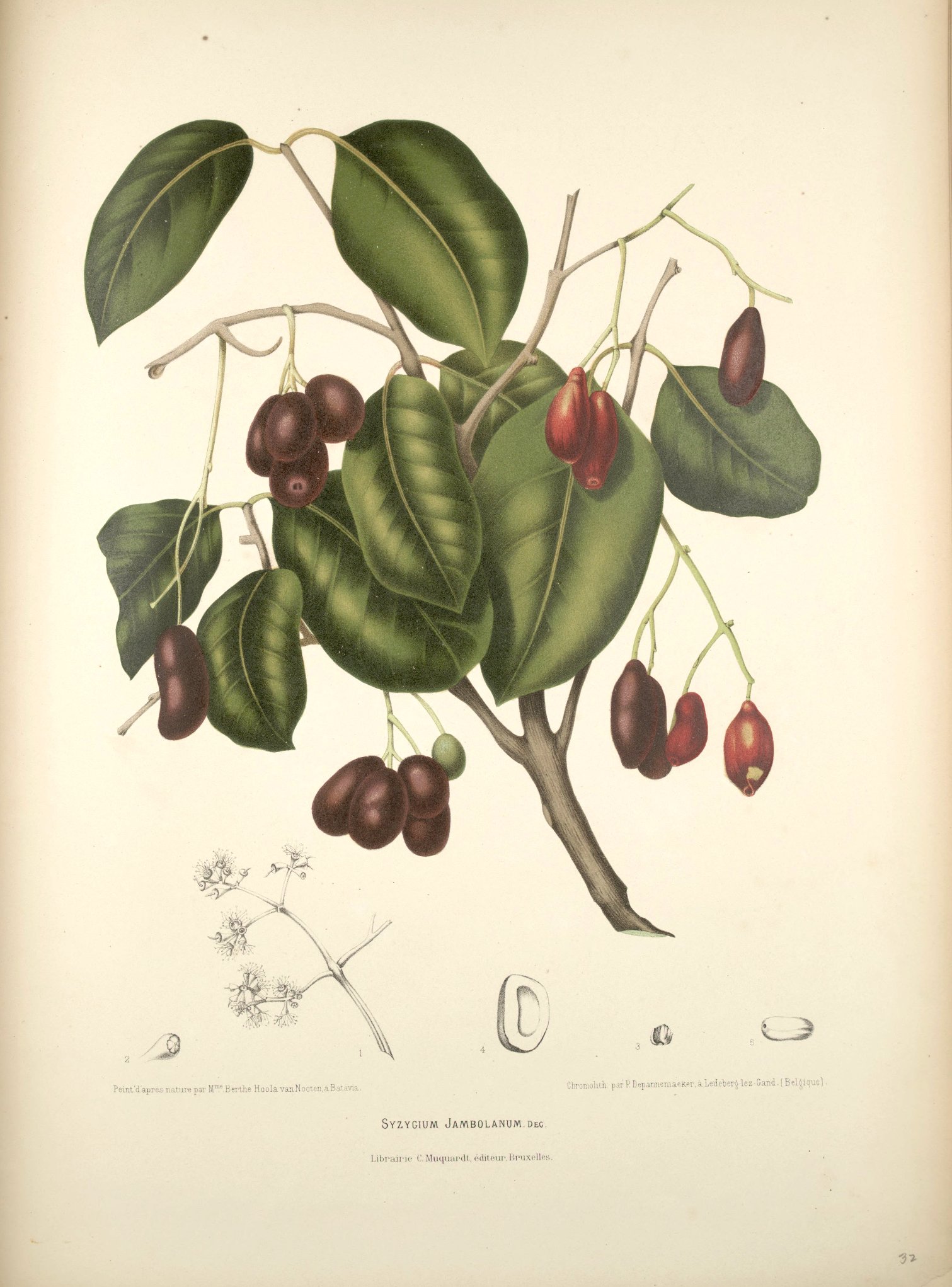 Description –
Syzygium cumini is a fast growing evergreen tree species that can reach heights of up to 30 m and can live over 100 years.
The trunk is straight and short, robust and not very branched, usually around 40-100 cm in diameter.
The bark is rough and dark gray at the base of the tree, becoming lighter gray and smoother higher up.
The leaves, which have a turpentine-like aroma, are pinkish in color when young, turning to a leathery, glossy dark green with a yellow midrib as they mature.
The flowers are fragrant and small, about 5 mm in diameter.
Flowering begins from March to April.
The fruits, which develop by May or June, resemble large berries and are drupes; they are oblong and ovoid in shape, about 20 mm x 18 mm.
During ripening the fruit changes from green to pink and then to bright crimson red and finally black. A variety of this plant produces white colored fruits. The fruit has a combination of sweet, slightly acidic and astringent flavor and tends to color the tongue purple.

Cultivation –
Syzygium cumini is an evergreen, fast-growing, attractive, compact tree or shrub with a dense, leafy crown.
It is a very ancient fruit crop, cultivated for over 2,500 years in India, where it is revered by Buddhists and Hindus. It is considered sacred to Krishna and is often planted near temples.
The tree is widely grown in tropical and subtropical areas for its edible fruit but is considered invasive in Florida, South Africa, parts of the Caribbean, several islands in Oceania, and Hawaii.
For its cultivation it should be taken into account that it is a plant of tropical and subtropical areas, where it is found at altitudes up to 2,000 meters.
It grows best in areas where annual daytime temperatures are between 20 and 32 ° C, but can tolerate between 12 and 48 ° C.
During the vegetative phase it can be irreparably damaged however at temperatures of -2 ° C or lower, while the new vegetation is killed at -1 ° C.
The plant prefers an average annual rainfall in the range 1,500 – 6,000 mm, but tolerates 800 – 9,900 mm.
The plants can withstand a dry season of up to 6 – 7 months and although it prefers a sunny location, the plants are moderately shade tolerant, especially when young.
From the pedological point of view it is a very versatile plant capable of growing on a wide range of soils; it can also grow on shallow and rocky soils as long as rainfall is sufficient; it is a plant that, in fact, tolerates prolonged flooding and, once stabilized, can tolerate drought.
As for the pH it prefers a pH in the range 5.5 – 7, tolerating 4.5 – 8.
Plants are tolerant of rather strong winds.
From the point of view of the management of the plant it is a tree that yields very well; Vigorous shoots are produced in large numbers from small and large strains alike. Coppice woods have been reported along the streams that have grown to 4.6 meters in 4 years.
Furthermore, this plant re-sows spontaneously and can become invasive in pastures and in various areas of the globe.
As mentioned it is a fast growing plant and the young seedlings can reach a height of 4 meters in just 2 years.
Propagation can occur by seed. The freshly harvested seeds are usually sown in flower beds at a depth of 20 – 25 mm during the rainy season and germinate in 2 – 4 weeks at a rate of 20 – 90%.
Subsequently the plants are uprooted at 6 – 9 months in flower beds of 30 x 30 cm.
For seedling development, humidity is even more important than shade, as seedlings in the sun develop well, provided the soil is kept moist, but seedlings in shade die if the soil is dry.
1-3 year old seedlings can be planted without any difficulty.
The multiplication can also take place by grafting.

Customs and Traditions –
Syzygium cumini is a plant known and used since ancient times.
The 1889 book “The Useful Native Plants of Australia” records that the plant was called “durobbi” by the indigenous Australians and that “The fruit is much eaten by the natives of India; in appearance it resembles a wild plum tree, has a sour appearance but with a sweetish, somewhat astringent and acidic taste, it is eaten by birds and other animals.
The fruit has long been used in traditional medicine in the areas of origin.
This plant also has a particular cultural and religious significance in India. Krishna is also known to have four jambu fruit symbols on his right foot, as mentioned in Srimad Bhagavatam’s commentary (verse 10.30.25), “Sri Rupa Chintamani” and “Ananda Candrika” by Srila Visvanatha Chakravarti Thakura.
In Maharashtra, S. cumin leaves are used in wedding pandal decorations. A song from the 1977 film Jait Re Jait mentions the fruit in the song “Jambhul Piklya Zaadakhali”.
The legend in Tamil Nadu speaks of Avvaiyar (also Auvaiyar or Auvayar) of the Sangam period and of the jamun fruit, called naval pazham in Tamil. It is said that Avvaiyar, believing he had achieved all that was to be achieved, was pondering his retirement from the Tamil literary work while resting under the naval pazham tree. The prayer was greeted by a disguised Murugan, considered one of the guardian deities of the Tamil language, who later revealed himself by making it clear that there was still much to do and learn.
This plant is traded. In fact, the fruits and seeds are sold in local markets for medicinal uses.
In the food sector, on the other hand, fruits are used, both raw and transformed into jams, sorbets, jellies, juices, pies, puddings, etc.
The fruit of this plant is juicy, almost odorless, with a pleasant, slightly bitter, astringent flavor.
Astringency can be removed by soaking the fruit in salted water before cooking.
The fruit tends to be of variable quality, pleasantly and moderately acidic at best.
Raw fruit contains 83% water, 16% carbohydrates, 1% protein and contains negligible fat. In 100 grams, raw fruit provides 60 calories, moderate vitamin C content, and no other micronutrients in appreciable quantities.
Furthermore, a drink similar to coffee is obtained from the dried and ground seeds.
In the medicinal field, both the seeds and the fruit are diuretics and have important carminative and astringent properties.
The seeds also reduce blood sugar levels and are useful in treating diabetes.
The seeds and bark are well known in the Far East for the treatment of dysentery and for the control of hyperglycemia and glycosuria in diabetic patients.
The juice from the bark is considered good for healing wounds and enlarged spleen.
The bark is astringent. An infusion is used to treat irregular menstruation, diarrhea, dysentery, etc. It is also used as a gargle to strengthen the gums, treat mouth ulcers, etc.
The ripe fruit is astringent and is used as an effective treatment for diabetes. The fruits are used as a relief for colic and to treat diarrhea.
An infusion of the leaves is also used in the treatment of diabetes and diarrhea.
The wood produces a pulp that has medicinal uses, and the roots are sometimes used as a treatment for epilepsy.
Other uses include agroforestry ones.
The plant is amenable to pruning and can be grown as a hedge or as a shelter from the wind. In perennial plant systems it is often planted as a shade for banana, coffee and cocoa crops.
Its dense foliage also provides shade and is also grown for its ornamental value.
Syzygium cumini is also exploited for its timber.
Wood is water resistant after being kiln dried. For this reason it is used in railway sleepers and to install motors in wells. It is sometimes used to make inexpensive furniture and village dwellings, although it is relatively difficult to work for carpentry. Although difficult to work, it is used for construction, boat building, plywood, agricultural tools, tool handles, trolley wheels, curbs and troughs, sleepers, furniture, and as props for shafts and tunnels in mines. It is also used to build bridges and to build musical instruments, especially guitars.
The heartwood, reddish-gray or reddish-brown in color, is fine-grained and resistant to water and termites.
Wood has a specific weight of 0.77 and burns well, releasing around 4 800 kcal / kg. It is a fast-growing tree, providing excellent firewood and charcoal.
Furthermore, the bark contains 13 – 19% of tannins.
It was used in tanning and also produces a brown dye which was used to color and store fishnets.
In addition, the branches are used to whiten the teeth.
From an ecological point of view, Syzygium cumini is a plant whose flowers are very attractive to bees, producing quality honey.
The leaves are used as a food for livestock, as they have a good nutritional value.

Preparation Method –
Jambul fruits have a sweet or slightly acidic taste, are eaten raw and can be made into sauces or jams. The inferior fruits can be made into juice, jelly, sorbet, syrup or fruit salad.
A coffee substitute is obtained from the dried and ground seeds.
In the medicinal field, both the seeds and the fruit find applications, as mentioned, for various uses.
The juice from the bark is used to treat wounds and an enlarged spleen.
It is also obtained from this an infusion or also used as a gargle to strengthen the gums, treat mouth ulcers, etc.
An infusion is obtained from the leaves and the pulp of the wood also has medicinal uses and the roots are sometimes used as a treatment for epilepsy.