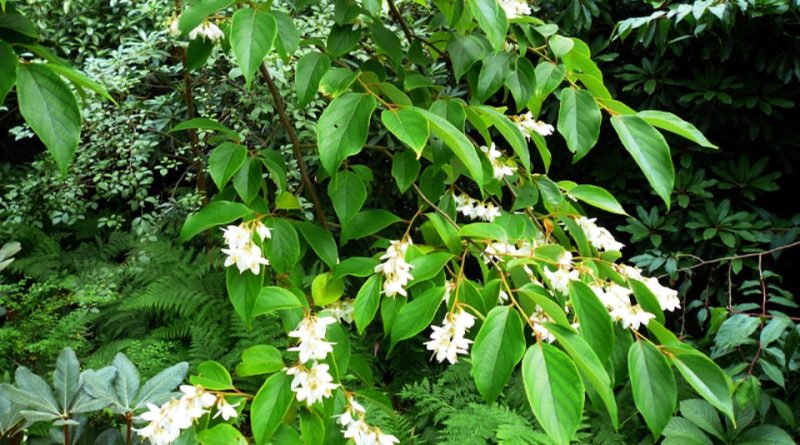 Etymology –
The term Styrax comes from the Greek στῠραξ stýrax styrax, an aromatic resinous plant; according to some authors this name is derived from the Arabic as (si) tirax, resin that is extracted from different plants, especially Styrax officinalis, according to others it is the Arabic name that derives from the ancient Greek.
The specific epithet tonkinensis refers to the ancient name of North Vietnam: Tonkin and also refers to the Gulf of Tonkin (Vinh Bac Bo).

Geographic Distribution and Habitat –
Styrax tonkinensis is a plant native to an area that includes Southeast Asia and is present in southern China, Fujian, Guangdong, Guangxi, Guizhou, Hunan, Jiangxi, Yunnan, Cambodia, Laos, Thailand and Vietnam.
Its habitat is that of mixed forests, open forests on mountain slopes and along the edges of mixed forests in relatively disturbed sites, at altitudes between 30 and 2,400 meters. This plant is a relatively common component of primary and secondary forests. 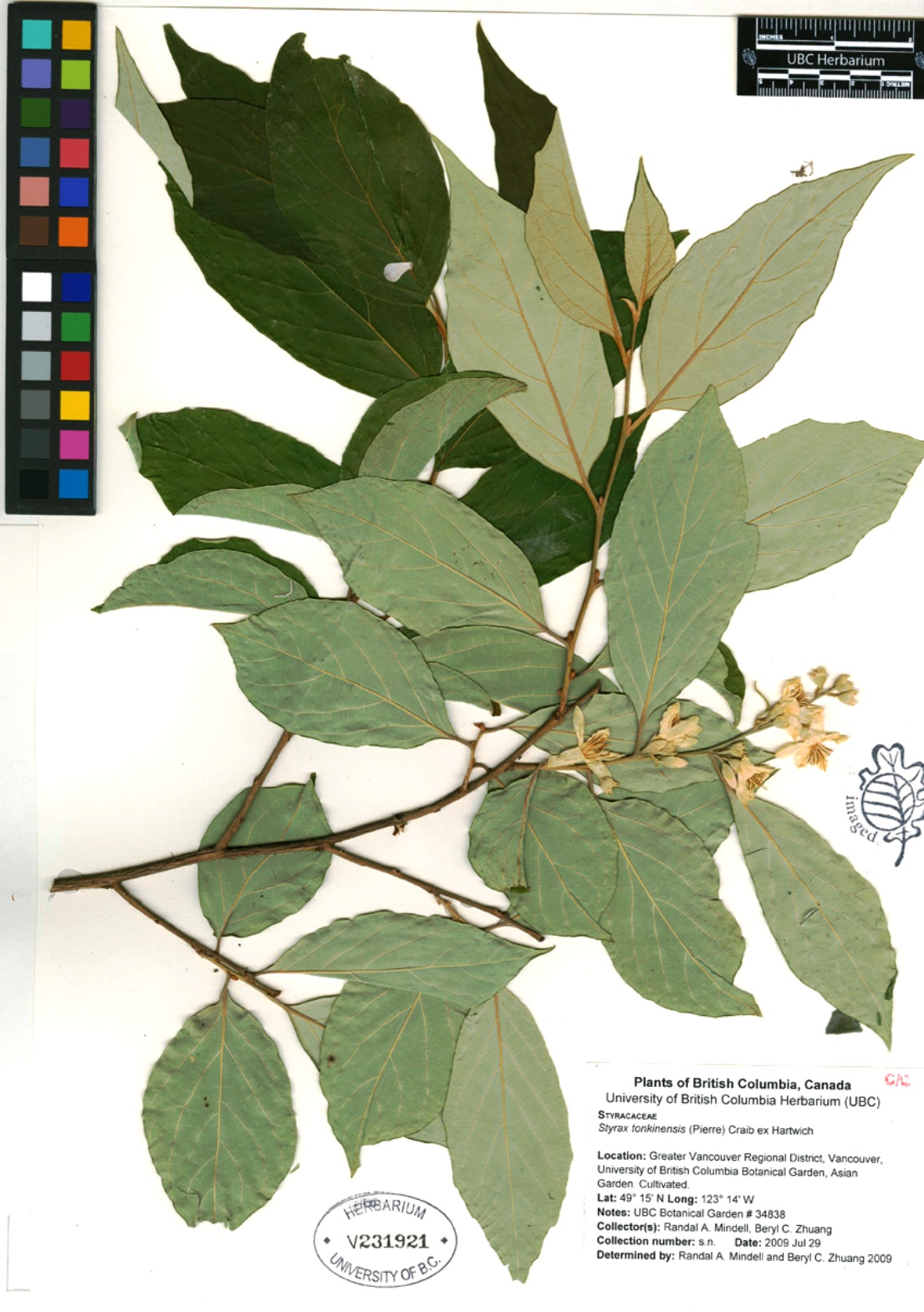 Description –
Styrax tonkinensis is a semi-deciduous tree with a dense canopy, especially in young trees that can grow between 6 and 30 meters in height. The trunk can be branchless up to 20 meters and has a diameter of 8 – 60 cm.
The branches are covered with starry tomentum, which become glabrousecent.
The leaves are papery to leathery in consistency, 5–18 × 4–10 cm and elliptic to ovate in shape, with a glabrous upper surface or with some hairs along the veins; the lower surface is densely covered with gray stellate tomentum, five to six secondary veins on each side of the midrib, entire or apically serrated margins, short-sharp apex, rounded to wedge-shaped base; petiole 0,5-1,5 cm long.
The inflorescences are axillary, these are 3–5 cm long, from one to seven flowers, or pseudo-terminals; if racemose or pani culate they are 3–20 cm long, with 6–23 flowers; pedicels 0.5–1 cm long. The flowers are 1.2-1.5 cm long; white-hairy calyx, with small irregular teeth; corolla tube 3–4 mm, five lobes, 10–15 mm, ovate to lanceolate, membranous.
Flowering is from May to June.
The fruit is subglobose, with a diameter of 1–1.2 cm, starry-tomentose gray, which divides by means of three valves.
Fruiting takes place from August to October (China).

Cultivation –
Styrax tonkinensis is a tree valued in Vietnam as a commercial source of wood pulp. It is also appreciated, especially in the highlands of Laos, for the rubber resin obtained from its trunk. It has been planted in soil restoration and reforestation programs in several other regions of the tropics.
It is a plant that can be grown in an area ranging from subtropical areas to the tropics, where, in nature, it is found at altitudes between 30 and 2,400 meters above sea level.
It is found in areas where the average annual temperature is between 15 and 26 ° C, although it can survive occasional, short-lived extreme temperatures as low as -4 ° C and up to 45 ° C.
The plant prefers an average annual rainfall of between 1,500 and 2,200 mm, although it can tolerate a minimum of 1,300 mm in cultivation.
It grows in areas without a distinct dry season, or only a short dry season and requires a sunny location.
Styrax tonkinensis is a fast growing plant and under favorable conditions it can reach annual height gains of 3 meters during the first three years of growth.
At 10 years old it reaches an average height of 18 – 25 meters, with stems of 20 – 24 cm in diameter. This growth would give a wood yield of about 150 cubic meters per hectare based on the density of the final stand of about 600 – 800 stems per hectare.
The trees are exploited for their resin from the age of about 6 – 7 years. The exploitation continues for 3 – 4 years, or until production decreases.
It is a plant with a shallow root system.
Propagation occurs by seed which soon loses its vitality if it is left to dry, but can be stored for at least one year at 20 ° C if kept humid.
Fresh seeds need a post-ripening period or it will take several months to germinate. This is done by placing the fruits in layers 30 – 40 cm deep in trays in the shade for 5 – 6 days and turning them daily to provide ventilation.
When the pericarp turns yellow or gray, the seeds are extracted and then dried in the shade for 4 – 5 days.
It is recommended to sow the seeds in 50% shade and germination should take 2 – 5 weeks.
The plants should then be grown at 70% light and planted when they are 25 – 50cm tall, which usually takes 3 – 7 months to grow.

Customs and Traditions –
From Styrax tonkinensis a resin is obtained which, like other species of Styrax, has a long history of use in medicine and as incense. In addition to S. officinalis, these resins are mostly obtained from S. benzoin and other Asian species, including S. tonkinensis, and are a surprisingly valuable product. In 1996 the “rubber benzoin” trade was worth $ 5.2 million in Singapore alone (Kashio & Johnson 2001). Another important use of S. tonkinensis is as a plantation and agroforestry tree, due to its rapid growth and rapid firewood and pulp yield (Pinyopusarerk 1994). As a natural pioneer, germinating in disturbed forests, S. tonkinensis is ideal for planting conditions and exhibits at least some hardiness.
This plant is also used in the food sector. In fact, the balsamic resin obtained from the trunk is used by the food industry to flavor various products including ice cream, baked goods, chocolate glaze and various drinks.
However, the most important use is the medicinal one.
It is in fact used in modern pharmaceuticals as an inhalant with steam to relieve coughs, laryngitis, bronchitis and upper respiratory tract disorders or as a mild antiseptic.
The resin is used in traditional Chinese medicine to treat rheumatism, cough, cold, stomach pain and heartburn: it has also been used in the treatment of apoplexy, dizziness, convulsions and glycosuria.
From the resin it is possible to obtain tinctures and balms which are used to heal wounds.
The resin is also used in ‘Purol’, a well-known antibacterial powder used to refresh and soothe dry skin and improve skin allergies.
A pleasant, calming, comforting and warming scent is obtained from the combination of rose and benzoin.
The resin, obtained from incisions made on the trunk is of high quality and suitable for use in the perfume industry. It is characterized by its content of benzoic acid (10 – 12%), coniferyl benzoate (65 – 70%) and more than 20 other aromatic esters. Benzoin Resin Absolute is a thick, brownish-yellow oil with a sweet, balsamic smell and a hint of vanilla. Benzoin is used in the production of fragrances which are then blended and used in a wide range of end products which includes personal health care products such as toilet soap, shampoo, body lotions and creams, bath oil, aerosols and talc and household products and other products such as liquid soap, air freshener, fabric softener, laundry detergent and other cleaners. The resin is also used as incense.
Among other uses, it should be remembered that Styrax tonkinensis is a plant that can have interesting agroforestry uses. As mentioned, it is a pioneer and demanding species in terms of light in its native range, where it can rapidly colonize empty areas of forest areas.
If conditions are favorable, it can occupy many hectares as almost pure stands. The plant was introduced to China, Java, and French Guinea in West Africa, where it is used to restore eroded soils and provide green fire belts.
Timber is also used from this plant.
The wood is light and soft. It is not suitable for construction, but is for making wooden shoes, pencils, chopsticks, toothpicks and matches.
It is an important pulp wood species in Vietnam and the yield and pulp quality are comparable to many commercial pulp wood species.
Wood is also used as a fuel.

Preparation Method –
The most important use of Styrax tonkinensis is the resin which is obtained by making incisions on the trunk for a few years until exhaustion.
The resin for the various uses is obtained by alcoholic extraction from the resin of the plants and subsequently separated; a 100% pure essential oil is obtained.
This is used directly in various preparations or obtaining tinctures for medicinal use.