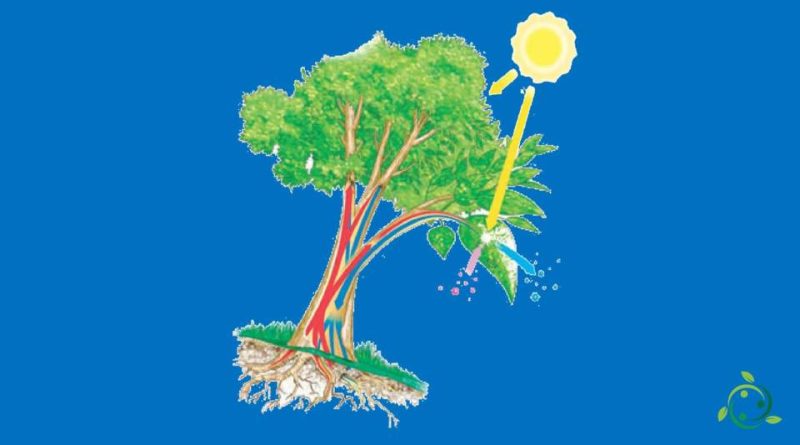 The term lymph, also called humor, in botany, means a liquid typical of plants.
The sap has a variable composition according to the needs of the plant, the temperature, the variability of the seasons and other factors and is distributed within the plant as raw sap through the xylem and as processed sap through the phloem.
The raw or xylem sap is that part consisting mainly of mineral salts and water; it flows from the roots upwards through the xylematic conducting vessels with a speed of about 15 meters / hour. The veins branch into each leaf arranging the xylem vessels close to each cell, thus ensuring an efficient distribution system. The silematic sap rises against the force of gravity from the roots towards the leaves and shoots thanks to two mechanisms: root pressure and traction.
The processed or phlegmatic lymph is an aqueous solution characterized by the presence of sucrose, the concentration of which can reach 30% by weight of the entire solution. Phlegmatic lymph can also contain amino acids, minerals and hormones. Contrary to the unidirectionality of the silematic lymph transport, the direction in which the phlegmatic lymph moves is more variable (translocation).

The raw sap is also called ascending sap as its movement, as mentioned, proceeds from the roots to the leaves and the apexes of the stem by means of xylematic conducting elements (tracheas and tracheids), distributing inorganic salts to be processed.
The processed sap is also called descending as its movement proceeds from the leaves to the roots by means of the crystalline tubes of the phloem, transporting processed organic substances including sugars and amino acids.
In the plant, therefore, there are two regions and two transport currents. The two regions are concentric and coaxial. The location of the two regions is well identified in woody plants, where the xylem is the mass of wood with its annual growth circles, while the phloem is found in the outermost portion of the bark. An example of ascending sap is given by the so-called ‘weeping’ of the vine; examples of descending sap are the latex that gushes out by cutting the bark of certain trees (rubber plant, Hevea brasiliensis) or the wall of certain fruits (poppy capsules) or by cutting fruit from plants (fig). The problem of transporting water and salts at great heights, as occurs in arboreal plants, is now explained with the theory of cohesion-tension for water transport.