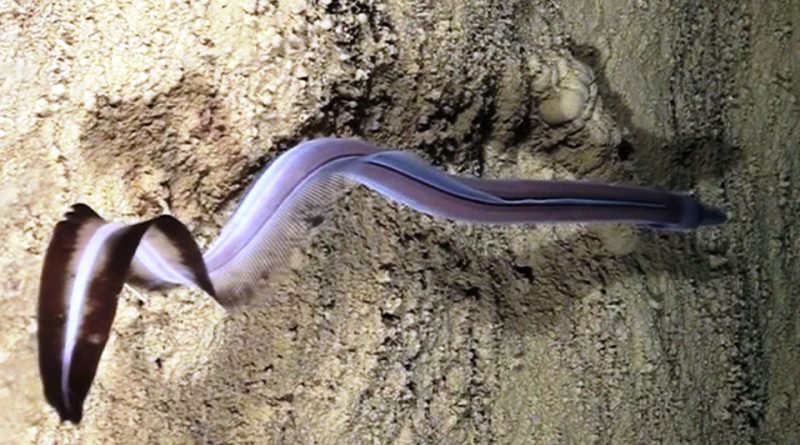 The blackfin sorcerer (Nettastoma melanurum Rafinesque, 1810) is an abyssal fish belonging to the Nettastomatidae family.

Geographic Distribution and Habitat –
The blackfin sorcerer is a fish that lives in the coastal waters of the Atlantic Ocean and also in the western Mediterranean Sea. It is more frequent in the waters surrounding the Caribbean, the Azores, the Canary Islands and the northern Mediterranean Sea, while it is very rare in the Adriatic Sea.
In the Italian seas it is quite common in the Ligurian, Tyrrhenian, Ionian and Sicilian seas.
Its habitat is that of deep waters, between 37 and 1647 meters but the maximum density is around 600 m. It populates muddy bottoms in which it lives sunken.

Biology –
Nettastoma melanurum is a fish in which reproduction occurs all year round.
The larvae are leptocephalic. They have a very flattened body laterally, shaped like a willow leaf.
The larvae go through a metamorphosis according to the following stages:
– Prelarva;
– Larva (ribbon-like leptocephalus);
– Semilarva (cylindrical leptocephalus);
– Transitional form with the adult.
These larvae are planktonic and feed on small crustaceans and other plankton animals.

Ecological Role –
The Nettastoma melanurum is a fish that lives in holes and ravines on the bottom of the continental slopes where it lives in deep waters on seabeds. Its natural predators are cod-like fish such as the European hake.
Instead, it is a predatory fish that feeds on benthic invertebrates and fish, mainly lantern fish.
This fish is caught by the trawl nets of offshore fishing boats and also bites the longlines, however its small size and its position on the bottom of the continental slopes do not make it dangerous for humans and moreover it is of no use for the fishing due to the abundance of other eels which are easier to spot and catch. Among other things, the meats, even if edible, are smooth and for this reason it is almost never found on the markets.