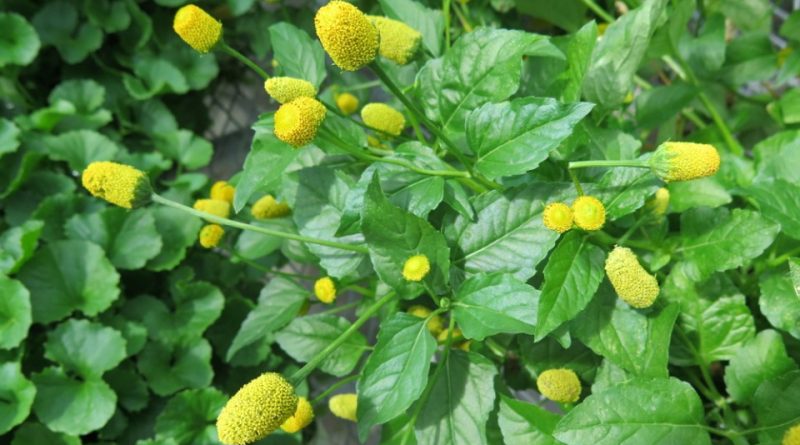 Etymology –
The term Acmella is of uncertain etymology: for Gledhill from the Greek ἀκμή acmé punta, apex in the sense of pointed or vigorous; according to Daniel F. Austin in Florida Ethnobotany same etymology, but for the pungent taste of the leaves; for Coombes instead from the Sinhalese vernacular name of Acmella oleracea, but it is not very credible because it is a genus native to South America.
The specific epithet oleracea comes from ólus óleris vegetable: used as a vegetable.

Geographic Distribution and Habitat –
Acmella oleracea whose native distribution is not clear, but it is likely that it is Brazilian and, in any case, of South American origin, where it is also found in Peru.
Its original habitat is not known as it is found in areas that have escaped cultivation, growing in grassy places, usually in humid locations such as lake swamps, etc. 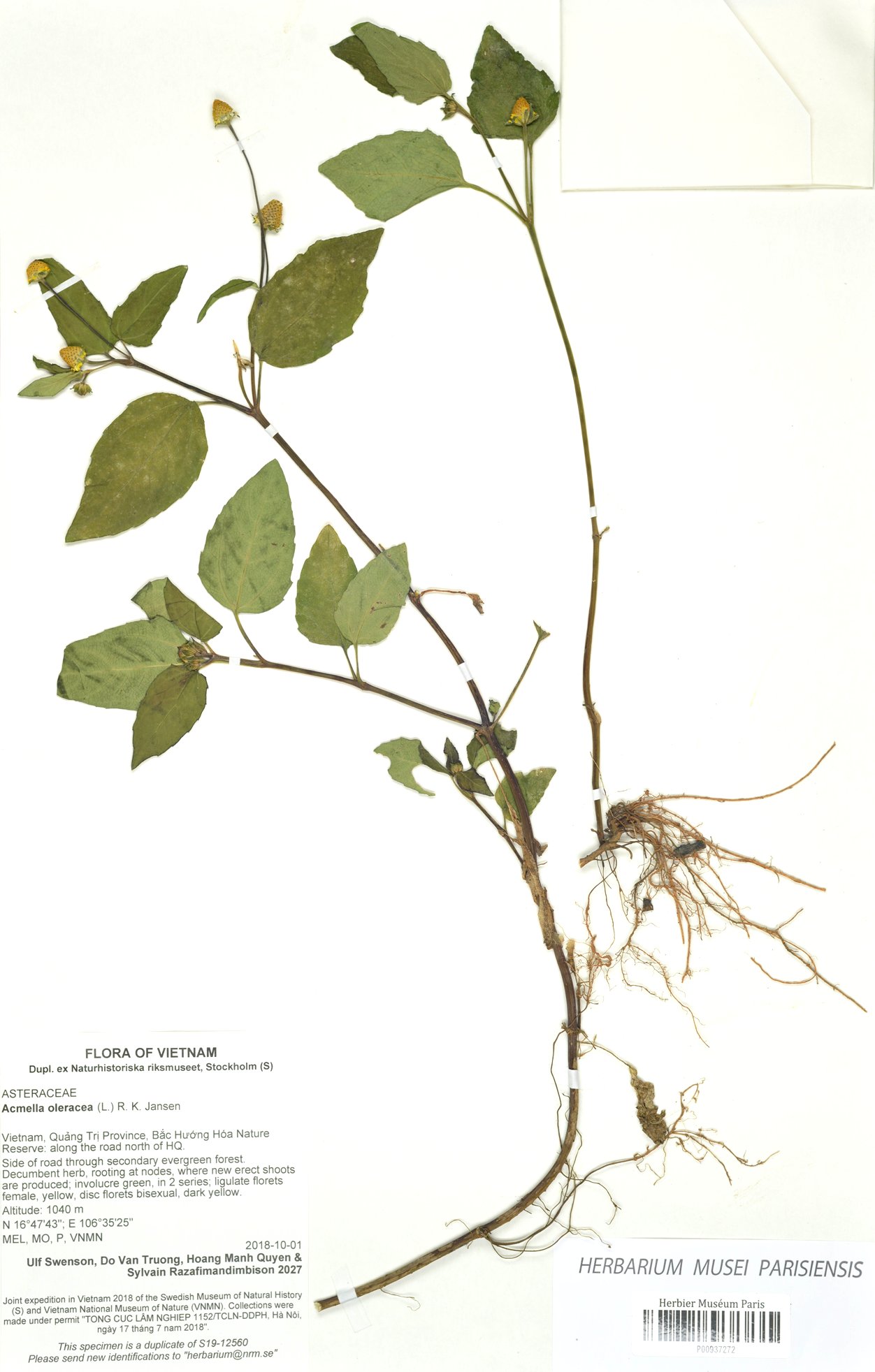 Cultivation –
The toothache plant is a plant that prefers moist, well-drained, organically rich soils and in a fuller or partial sun position; cannot grow in full shade. In its native environment, it grows as a perennial in regions with an average temperature around 28 ° C. with heavy rainfall and a relative humidity of 85%.
The plant is often grown as an annual for its edible leaves in parts of the tropics, particularly Brazil and is also widely grown as an ornamental species due to its attractive colorful flower heads.
There is a wild form with much stronger flavored leaves that is occasionally used in salads but is more commonly used medicinally, especially to treat toothache.
The plant propagates by seed which, to germinate, requires a temperature of 21 ° C. Germination occurs in about 2 weeks.
It can also be propagated agamically through cuttings to be taken when the plant is not in bloom.

Customs and Traditions –
Acmella oleracea is a plant of very ancient use.
The Chachapoyas or “warriors of the clouds”, an Amazonian tribe descended from the Incas, have always used this plant to treat toothache; the French medical anthropologist Francoise Barbira Fredman experienced it during a stay in those lands, who in the absence of a dentist tried this remedy with miraculous effects on himself: “a mysterious plant with yellow flowers that made my pain disappear like by magic “.
This plant is widespread, as well as in its areas of origin, in Australia, India, Malaysia and Sri Lanka, where it is widely used in traditional medicine to treat very different ailments.
This plant is used for both food and medicinal purposes.
In food use, the leaves of the plant can be used as steamed vegetables. Raw leaves are also used as a condiment for salads, soups, and meats in Brazil and India.
In medicinal use, the leaves and flower heads contain an analgesic agent that is used to numb toothache and gum infections. The numbness lasts for two to twenty minutes.
The buds have a sour-saline taste that ultimately leaves a numb and cooling sensation in the throat.
However, the analgesic action is not the only property of this plant.
The traditional use of Acmella is indicated for the treatment of numerous ailments including:
– affections of the mouth (toothache, cavities, canker sores, sore throat, gingivitis)
– cuts, blisters, wounds and boils (as an antiseptic and bactericide);
– painful conditions (headache, muscle or joint pain, rheumatism);
– cold, fever and cough (stimulant of the immune system, antipyretic);
– urinary infections, candidiasis, herpes (used as an antibacterial, antifungal and antiviral);
– as a pesticide (malaria prophylaxis) and insecticide;
– digestive system disorders (stomach pain, gastritis, diarrhea or constipation, to get rid of the unpleasant symptoms of an alcoholic hangover);
– aphrodisiac effects.
But, as mentioned, the use of this plant is differentiated and varied according to the various populations that use it.
Among other things, numerous scientific publications have confirmed the effectiveness of these traditional uses and many other pharmacological properties have been discovered: currently Acmella oleracea extracts are used for the treatment of more than 60 different types of ailments, proving the fact that patents for formulations and preparations based on extracts of this plant are rapidly increasing.
The plant is also recommended as a cure for dysentery and rheumatism and to boost the immune system. It is used against blood parasites, in particular against malaria, both prophylactic and curative.
In detail, the leaves are sialagogues; the leaves and flower heads are analgesic, anthelmintic, antibacterial and antifungal.
Some of the medicinal compounds are destroyed by drying or freezing.
In vitro studies have shown strong antibacterial activity against Escherichia, Klebsiella, Proteus, Pseudomonas, Salmonella and Staphylococcus. Candida albicans is also inhibited.
A decoction or infusion of leaves and flowers is a traditional remedy for stuttering, toothache and stomatitis.
An extract from the plant was tested against various yeasts and bacteria and was essentially inactive. It has been shown to have a strong diuretic action in rats.
As a plant, the analgesic effect has been attributed to the presence of constituents containing an N-isobutylamide fraction, such as spilanthol, a substance that has proved to be an effective sialogogue, an agent that promotes salivation. Spilanthol is absorbed transdermally and through the buccal mucosa. Spilanthol can activate TRPA1, a specific transient receptor potential (TRP) ion channel in the oral cavity. In addition to capsaicin, allylisothiocyanate and cinnamaldehyde, spilanthol has also been reported to affect the nerve pathways of catecholamines present in the oral cavity that promote saliva production.
An oil is traditionally extracted from all parts of the plant.

Preparation Method –
Acmella oleracea is a plant with particular characteristics for both food and medicinal use.
Throughout the world, flower heads are used fresh or dried and ground, but the use of roots and leaves has also been recommended.
Its biochemical composition gives salads a pungent flavor and stimulates the salivary glands while having a numbing effect on the tongue and lips.
Eating the leaves of this plant is a memorable experience. They smell similar to any green leafy vegetable. The flavor, on the other hand, is somewhat reminiscent of Echinacea, but without the bitter and sometimes nauseating element of that plant. First, a strong spicy heat spreads outward through the tongue, turning into a tingling sensation. With this the salivary glands come into action, producing quantities of saliva. As the tingling spreads, it softens to an acidic (slightly metallic) sharpness accompanied by tingling and then numbness. The numbness wears off after a while (two to twenty minutes, depending on the person and the amount eaten), and the pungent aftertaste can persist for an hour or more.
The plant is a very popular ingredient in Amazonian soups, it has become the favorite vegetable of Europeans living in Madagascar.
An extract from the plant, sometimes called jambu, is used as a flavoring agent in foods, chewing gum, and chewing tobacco.
Jambu extract can also be used in cosmetics and shampoos.
The most common and widespread medicinal use is the treatment of toothache and throat and gum infections.

Warning: Pharmaceutical applications and alimurgical uses are indicated for informational purposes only, they do not represent in any way a medical prescription; therefore no responsibility is taken for their use for curative, aesthetic or food purposes.
Photo source:
– https://ids.si.edu/ids/deliveryService/id/ark:/65665/m31d2d630355ae4159b6dbefba09de1fb3
– https://mediaphoto.mnhn.fr/media/1576075903009x5DjroTv7aNQeoD4