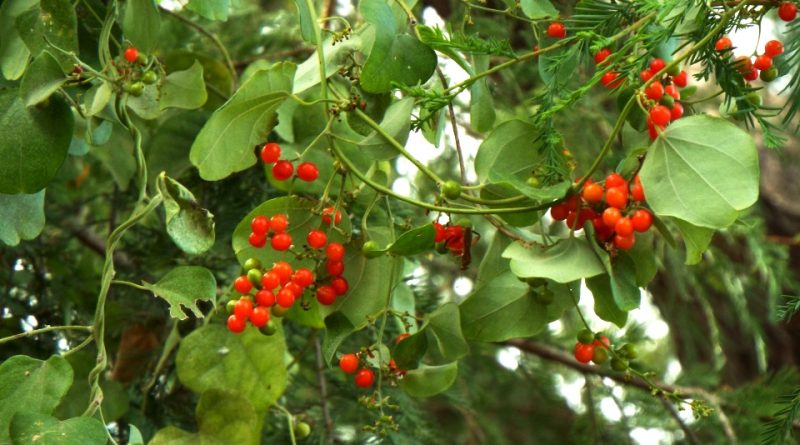 The gray sarsaparilla, Mexican sarsaparilla or sarsaparilla (Smilax aristolochiifolia Mill.) Is a climbing shrub species belonging to the Smilacaceae family.

Etymology –
The term Smilax comes from the Greek σμιλαξ, smilax, the name with which very different plants were designated by the ancient authors. In the Latin writers Pliny and Ovid the name was used for various thorny climbing plants.
The specific epithet aristolochiifolia comes from the Latin aristolochia, in turn from the ancient Greek ἀριστολόχεια, aristolókheia, from ἄριστος (áristos, “best”) + λοχεία (lokheía, “childbirth, childbirth”) and from the Latin foliŭm foliă leaf.

Geographic Distribution and Habitat –
Smilax aristolochiifolia is a plant native to Mexico and Central America.
This plant is found especially in Belize, El Salvador and Guatemala. In southern Mexico it is mainly found in the states of Tabasco, Veracruz, Yucatán, New León, Puebla, Oaxaca and Quintana Roo. In El Salvador, it is located in Hacienda San José and Santa Ana.
Its habitat is that of wooded areas where it uses its tendrils to climb trees. It is found widely in temperate, swampy and warm areas but also at high altitudes; in Nuevo León, Mexico, is located at an altitude of 1760 meters, in Oaxaca at 100 meters, in Hacienda San José, Santa Ana between 850 and 1100 meters. 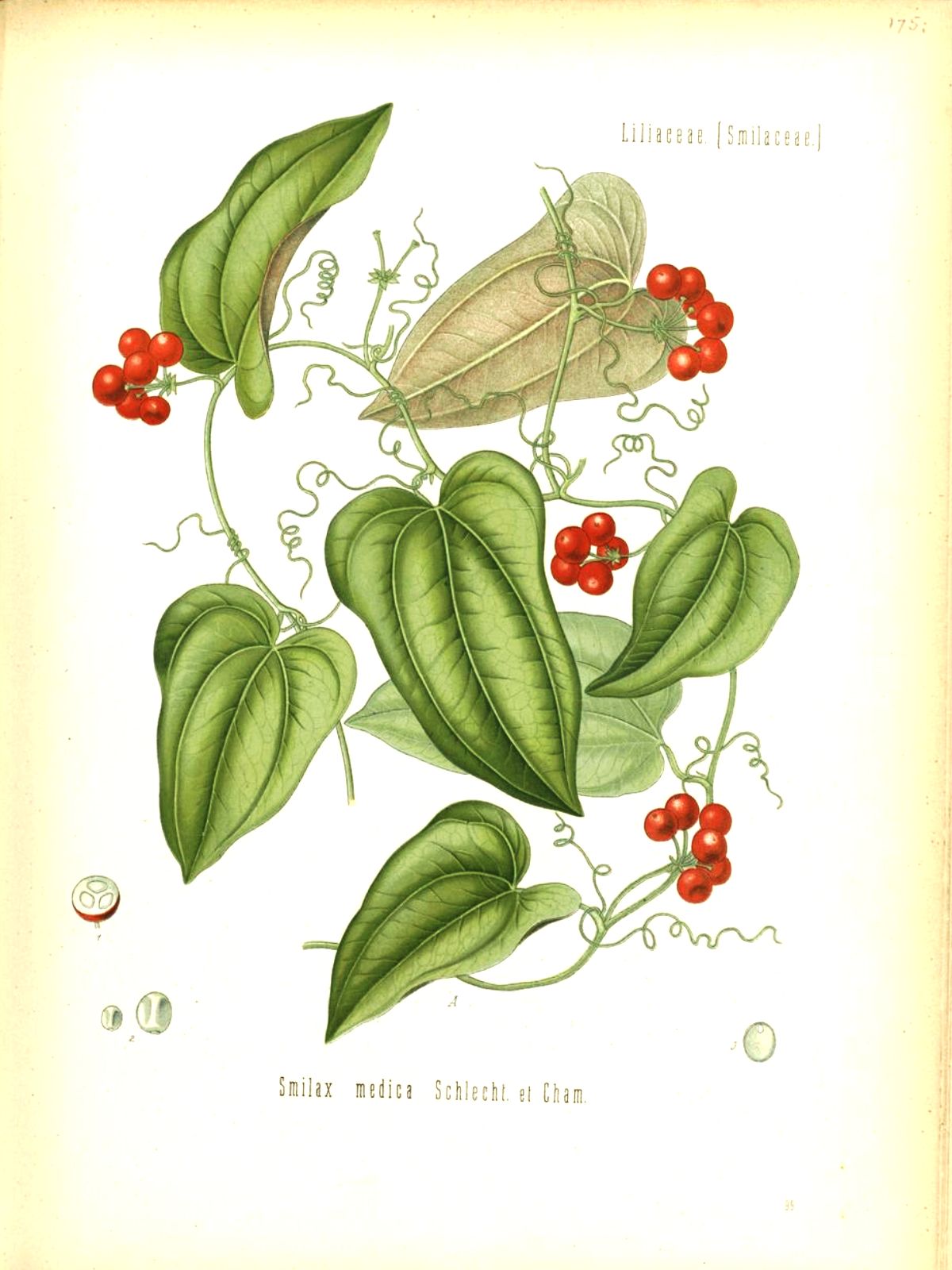 Description –
Mexican sarsaparilla is a perennial, woody climbing plant with tendrils and thin branches.
It has hairy, fibrous roots with few rootlets. They have a hard surface and grow from 2 to 2.5 meters. The color of the roots varies from brownish gray to black.
The leaves are ovate, extended that grow 4 to 5 meters vertically. The leaves are veined and pinnate, leathery and alternately arranged. The width of the leaves varies from 10 to 30 cm, and the length of the petioles is about 5 cm.
The flowers are small, green, radially symmetrical, dioecious and are collected in an umbrella inflorescence of 12 flowers.
The berries are small, red in color, with 2 or 3 seeds and are produced in the fall or late summer and remain intact during the winter to be eaten by animals and birds.
Pollination occurs when the seeds, still intact, are found in the faeces.
The surface of the stem is smooth or even bent and has thorns at the joints.

Cultivation –
Smilax aristolochiifolia is a perennial climbing plant used in both food and medicine.
It is a persistent plant in that even when most of the roots are cut off the stem, the roots also grow back a few years later.
This plant is used both in its natural state and in crops.
It grows in areas between about 100 m and 1800 m s.l.m. and its propagation can take place either by seed or by division.

Customs and Traditions –
Smilax aristolochiifolia is one of the main species providing commercial sarsaparilla; rhizomes are used medicinally and as a flavoring in foods and are also used and sold in local markets for medicinal use. It is, moreover, one of the three species (the others are Smilax febrifuga and Smilax regelii) which in the 17th century gained a high reputation as a cure-all, so much so that they were widely imported into Europe until the beginning of the 20th century. their rather overrated reputation somehow faded.
In the food sector, its roots are used which are extracted to be used in flavoring drinks, milk-based desserts, baked goods and candies. Sarsaparilla was once a main ingredient for flavoring root beer. However, the flavor of the root extract itself is sweet and bitter.
In the medicinal field, Smilax aristolochiifolia root has wide uses.
In traditional medicine it is used to treat leprosy, tumors, cancer, psoriasis and rheumatism. It is also used as a tonic for anemia and skin diseases. It is said to have anti-inflammatory, testosterogenic, aphrodisiac and progesterogenic effects, so the roots of this plant are often promoted as male invigorators. They have also been used to increase body mass by some gym enthusiasts. It is also believed to improve digestion and arouse appetite.
Natives of New Guinea use the sarsaparilla stem as a treatment for toothache. However, no definitive scientific evidence is provided on the medicinal effects of sarsaparilla and in excessive doses it can be harmful.
Biochemically the roots of Smilax aristolochiifolia contain saponins which are used to synthesize cortisone and other steroids. Saponins are known to help the body absorb other drugs more effectively. However, they are plant steroids and it is believed that they cannot be absorbed or used in the human body. This plant also contains organic acids, flavonoids, sitosterol and stigmasterol.
The main chemical substances contained are acetyl-parigenin, astilbin, beta-sitosterol, caffeoyl-shikimic acids, dihydroquercetin, diosgenin, engeletin, essential oils, epsilon-sitosterol, eucryphin, eurryphin, ferulic acid, glucopyranosides, isoastilbine, isoengetitol, paraffin. , parillin, pollinastanol, resveratrol, rhamnose, saponin, sarasaponin, sarsaparilloside, sarsaponin, sarsasapogenin, shikimic acid, sitosterol-d-glucoside, smilagenin, smilasaponin, smilax saponin A-C, smiglaside A-E master.
Ecologically speaking, in some regions of Mexico, edible wild plants have unfortunately been displaced or eliminated from traditional food systems, mainly due to changes in land use, the boom in monoculture, the use of herbicides. and changes between the new generations in the traditional foods and diets of indigenous peoples. In the Totonacapan region of Puebla, the gradual shift from traditional plantations to coffee-type agroecosystems has resulted in the displacement of centuries-old forests and the eradication of wild plants from 1970 to the present.

Preparation Method –
The Mexican sarsaparilla is a plant, widely used both in the food and medicinal fields.
In the food sector, root extracts are used to flavor drinks, ice cream, confectionery and baked goods.
The root has a bitter taste, similar to licorice.
In the medicinal field, the root is used as an alterative, anti-inflammatory, digestive and antiseptic.
These contain steroid saponins which are used effectively for many cases of psoriasis; they also have hormonal effects and can improve fertility in women with ovarian dysfunction.
A decoction is used in the treatment of fevers, digestive disorders, kidney disorders and gonorrhea; this is also used against skin diseases and rheumatism.