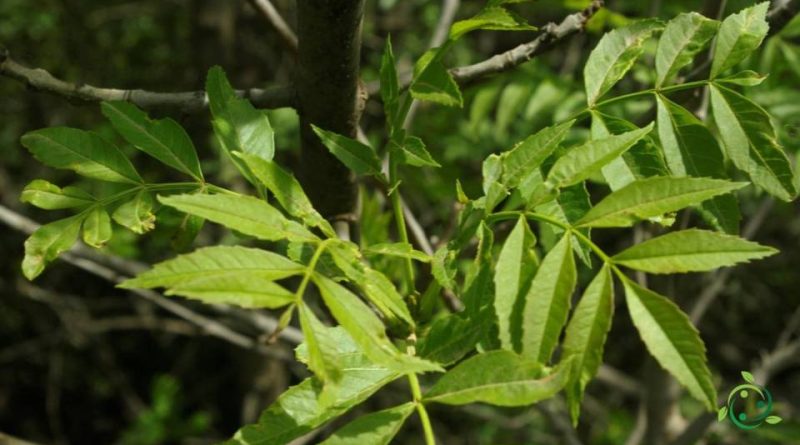 The Narrow-leaved ash (Fraxinus angustifolia Vahl, 1804) is a tree of the Oleaceae family that grows in southern Europe.

Suitable breeding habitat –
Fraxinus angustifolia is a species native to central and southern Europe, northwestern Africa and southwestern Asia.
Its distribution range is typically in southern Europe, from France and Portugal to Ukraine and Greece, Western Asia, from Turkey to Afghanistan and Pakistan, North Africa: Morocco, Algeria and Tunisia.
It is present in Italy in all regions.
Its habitat is that of mostly arid rocky places in scrub, deciduous scrub or in pine and mixed forest; at altitudes between 650 and 1,700 on average.

Propagation –
Fraxinus angustifolia is a moderately cold hardy plant, able to tolerate temperatures down to around -20 ° C when dormant.
These are plants that prefer deep, even clayey, and organic soils.
There are some varieties of this plant.
Propagation can occur by seed which must be harvested green, as soon as it is fully developed but before it dries up on trees. It should be sown immediately in an unheated seedbed.
It usually germinates in spring and the stored seed requires a cold stratification period and it is also best to sow as soon as possible.
The young seedlings are then placed in a growing nursery for their first winter or, better still, for the first two winters. The transplant is then carried out in late spring or early summer of the following year.

Ecology –
The woods in Fraxinus angustifolia can be in catenal contact with the riparian poplar and willow woods of habitats 91E0 * “Alluvial forests of Alnus glutinosa and Fraxinus excelsior (Alno-Padion, Alnion incanae, Salicion albae)” and 92A0 “Tunnel forests of Salix alba and Populus alba “and with more thermophilic woods of the Querco-Fagetea class including the oak woods of habitat 91AA *” Eastern white oak woods “and Quercetea ilicis and with habitat 91F0” Mixed riparian forests of large rivers Quercus robur, Ulmus laevis and Ulmus minor, Fraxinus excelsior or Fraxinus angustifolia (Ulmenion minoris) “.
From Fraxinus angustifolia, in a small Sicilian territory between Castelbuono and Pollina (PA), manna is extracted and the same is done in a few plants present in the mountains between Cinisi and Terrasini (PA).
Manna is the product obtained from the solidification of the elaborate sap that comes out, during the summer season, from the incisions made on the stem and main branches of some species of ash of the genus Fraxinus L. Manna is a sugary exudate consisting mainly of mannite , organic acids, water, glucose, fructose, mucilages, resins and nitrogen compounds; a very complex qualitative and quantitative composition strongly influenced by the area of ​​origin, the exposure, the chemical and physical characteristics of the soil, the age of the plants and the seasonal trend.