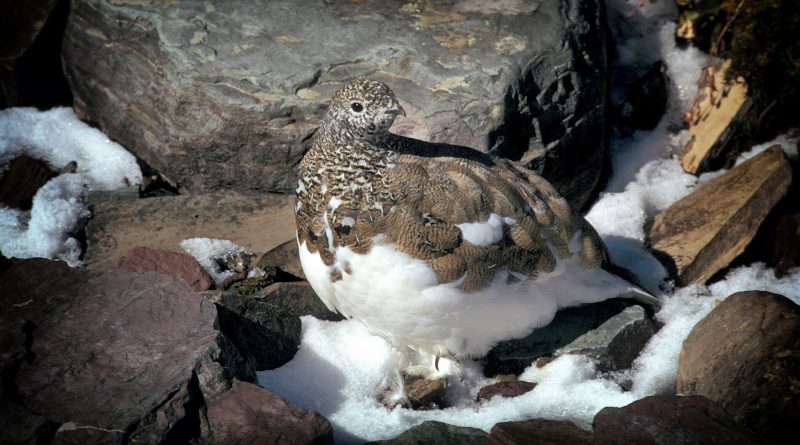 The rock ptarmigan (Lagopus muta Montin, 1758) is a bird belonging to the Phasianidae family.

Geographic Distribution and Habitat –
The rock ptarmigan is a sedentary species that nests in arctic and subarctic Eurasia and North America (including Greenland). This species is widespread in the Arctic Cordillera and is found in isolated populations in the mountains of Norway, Scotland, the Pyrenees, the Alps, Bulgaria, the Urals, the Pamir Mountains, the Altai Mountains and Japan, where it is found only in the Japanese Alps and Mount Haku. It has also been introduced in New Zealand, South Georgia, the Kerguelen Islands and the Crozet Islands.
During the last ice age, the species was much more widespread in continental Europe.
Its habitat is that of the rocky slopes and the tundra where it lives from 2000 to 3400 meters above sea level. Due to the remote habitat in which it lives, it has only a few predators, such as golden eagles, and can be surprisingly approachable.
The small population living in Franz Josef’s Land in the Russian High Arctic winters during the polar night and survives by feeding on rich vegetation above and below the high cliffs where colonies of seabirds are found in summer. 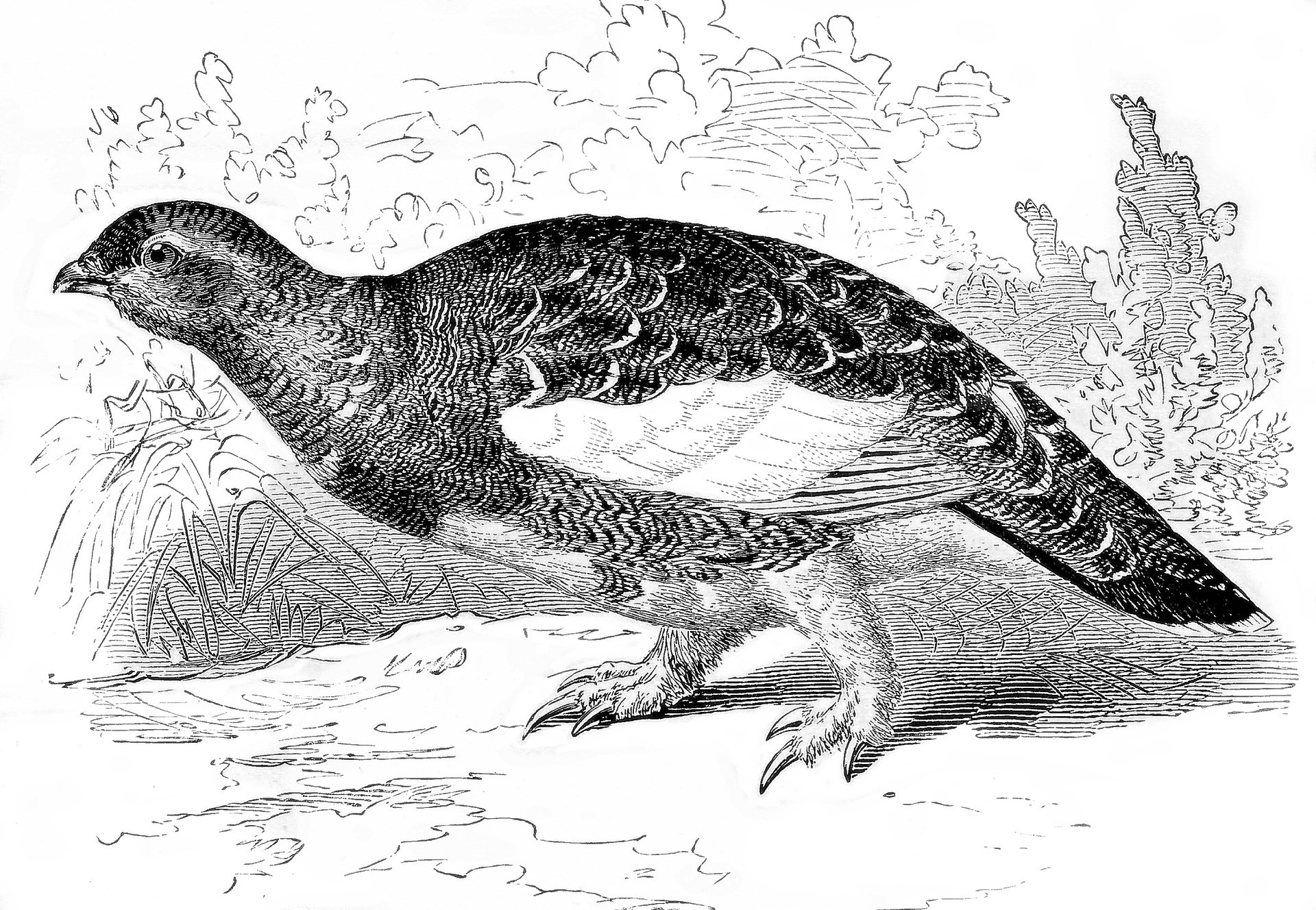 Description –
Lagopus muta is a medium-sized bird with a total length of 32.5-41 cm, a wingspan of 54-66 cm, for an average weight ranging between 420 and 540 grams.
It is recognized for its massive body, similar to those of a pigeon, with a fawn-yellowish plumage above, speckled with dark brown, with whitish abdomen (in the female), brown-greyish, speckled with dark brown, with whitish abdomen (male); in the young it is more similar to that of the females. It also has a characteristic seasonal dimorphism as, from November to March, the plumage is entirely white and the black tail feathers are visible only in flight.
Starting from April, the nuptial dress is assumed: the male has a blackish breast and gray-brown upper parts, the female is yellowish-brown with black bars, while both sexes keep their wings and belly white. The brownish-gray summer dress is progressively changed into the winter livery starting from September.
The male is usually larger, with a darker summer color, more developed caruncles and black renders in winter.
It has a relatively robust, short and black bill and a relatively small head, with red supraocular caruncles, more developed in the male.
The wings are always white, wide and rounded.
The tail is of medium length, black with a whitish edge.
The legs are of medium length, fully feathered all year round.
In flight it resembles a pigeon, with rapid wing beats alternating with short glides; on the ground the silhouette is made relatively slender by the long neck and tail, often held up.
The call and the song are an unmistakable hoarse “kroo rr kkkk”; Lagopus muta can be heard singing especially in the months of April, May and June during the first hours of light.

Biology –
The rock ptarmigan is a basically gregarious bird and in summer and autumn it can form flocks of a few dozen individuals. In spring the males become territorial and defend areas of a width equal to a few tens of hectares (in the Alps densities of the order of 4-5 males per square kilometer are considered good); with demonstrative behaviors, such as the song repeatedly emitted by rocky spurs and the circular flights with close take-off and landing points, they attract the females with which they form stable pairs for a period of two or three months.
This species reproduces in May-July and it is the female who assumes all the responsibilities for nesting and caring for the chicks, typical of game birds. In the nest, built on the ground often sheltered by a boulder or a dwarf shrub, 6-8 ocher eggs spotted with brown are laid, brooded by the female for 21-23 days. The male acts as a sentinel locating potential predators and usually abandons the mate shortly after hatching. The chicks, immediately able to follow the hen, develop very quickly and reach 80-90% of the final body weight within three months.
The maximum age registered in the wild is more than 6 years.

Ecological Role –
Lagopus muta is a bird that lives in stony and rocky grassy areas at high altitudes. It is mainly diurnal-crepuscular, solitary, in pairs or in small groups; moreover it is sedentary, breeding, partly erratic.
It is observed exclusively above the upper limit of the forests in areas where alpine meadows, stony ground, rocky bars and snowy valleys alternate. In summer, it prefers cooler slopes and altitudes usually no lower than 2400-2500 m; in winter it takes advantage of the exposed slopes in the southern quadrants and the windy crests, where the snow cover is less durable and it is therefore possible to find the plants it feeds on.
From the point of view of nutrition, they are stubbornly vegetarian birds, but the growing young also take on insects. The adults feed almost entirely on vegetables and include leaves, flowers, fruits, buds of herbaceous plants and prostrate shrubs. In winter, the vegetables richest in sugars and proteins are selected, collected in areas where the snowpack is less persistent and they also eat “snow fleas” which measure 2.5 mm and are rich in proteins.
In this bird, the caecum is long and hosts a rich bacterial flora that optimizes the assimilation of the less digestible components; nevertheless, the overall energy balance can only be maintained by minimizing consumption due to muscle activity and heat dispersion: this purpose is achieved by concentrating the periods of activity in limited time slots and reducing travel to a minimum.
From the point of view of the state of conservation, this bird, until a few years ago, was considered in a good state of conservation. Today, due to hunting (although this rarefaction also occurs in protected areas), climate change and too much disturbance caused by tourism throughout the year (especially during the hatching period), it is included in the red list of some countries as in Italy where it is at risk of extinction as a “vulnerable” species, or in a bad state of conservation. At European level it is classified as Spec 3 (species in decline, but not concentrated in Europe).