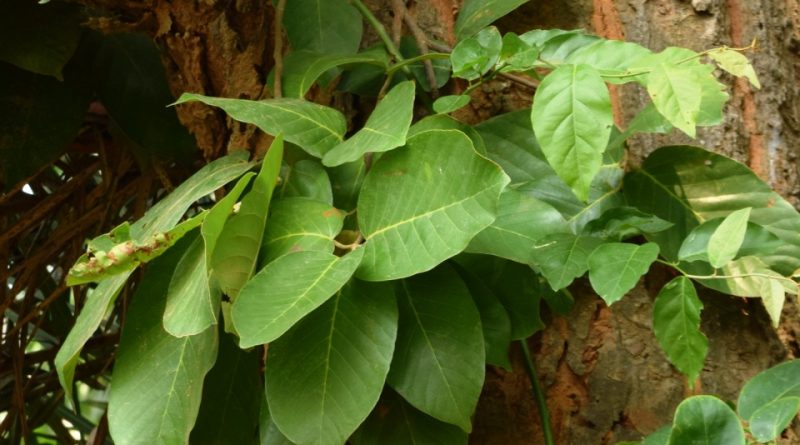 The Sal tree (Shorea robusta Roth) is an arboreal species belonging to the Dipterocarpaceae family.

Etymology –
The term Shorea of ​​the genus, to which about 196 species of mainly forest trees belong, was dedicated in memory of Sir John Shore, governor general of the British East India Company, 1793–1798.
The specific robust epithet comes from robur, a Latin term originally referring to particularly hard, robust or gnarled woods such as that of oaks, then passed to mean strength, vigor, robustness: therefore with the meaning of strength, vigor, vigor: robust, vigorous, vigorous .

Geographic Distribution and Habitat –
Shorea robusta is a tree native to the Indian subcontinent, being widespread throughout the territory south of the Himalayas, from Myanmar in the east to Nepal, India and Bangladesh. In India, its habitat extends from Assam, Bengal, Odisha and Jharkhand in the west to the Shivalik Mountains in Haryana, east of the Yamuna River. It also extends through the eastern Ghats and into the eastern chains of the Vindhya and Satpura of central India.
In its habitat it is often the dominant tree in the forests where it occurs. In Nepal, it is found mostly in the Terai region from east to west, especially in the Churia range (within the Shivalik Mountains) in the subtropical climate zone. There are many protected areas, such as Chitwan National Park, Bardia National Park and Shukla Phat Nature Reserve, where there are dense forests of huge sal trees. It is also present in the lower belt of the Hilly region and in the Inner Terai. 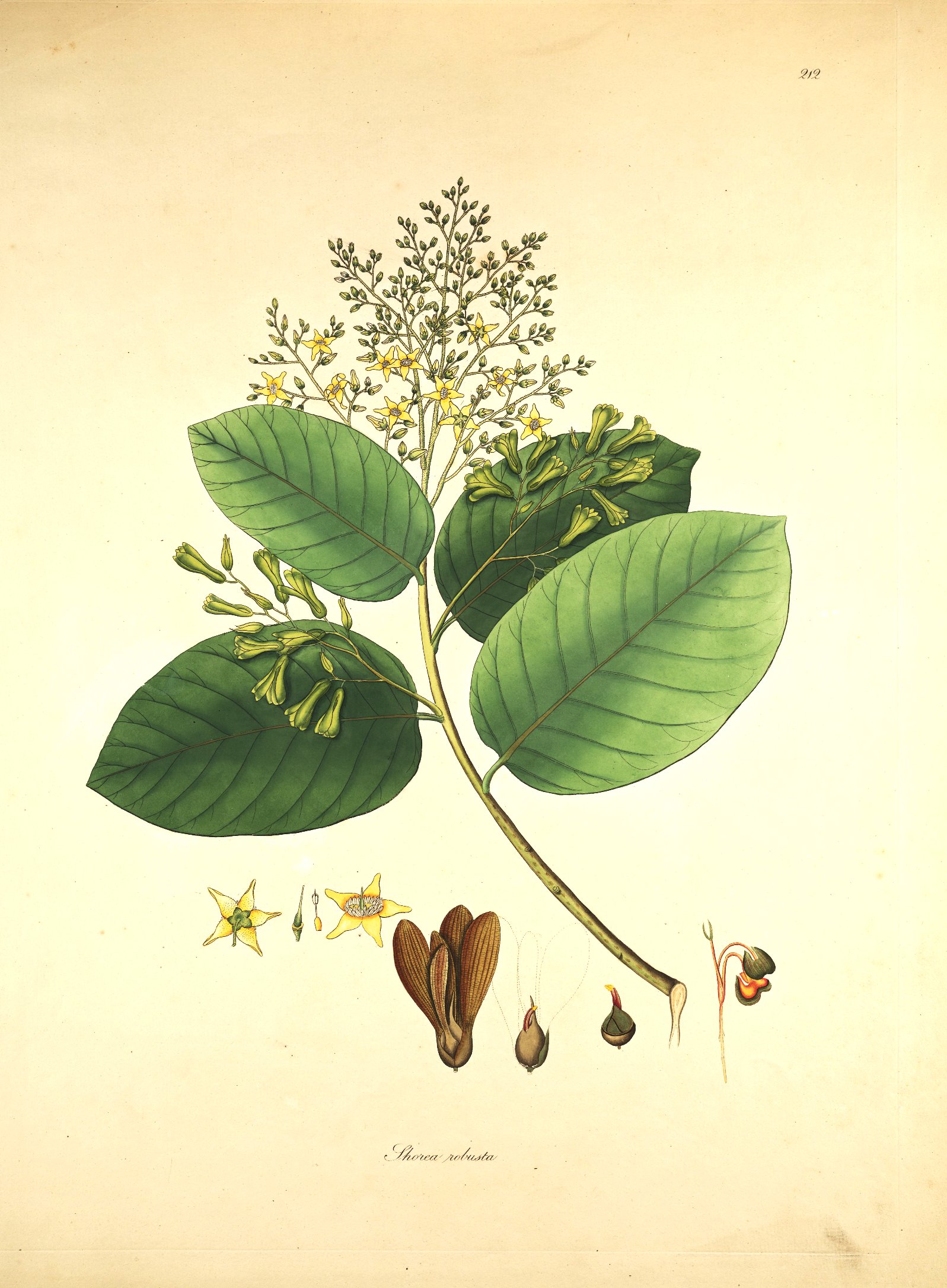 Description –
Shorea robusta is a plant that can reach heights of 30 to 35 m and even more and a trunk diameter of up to 2-2.5 m. It is a tree which in the more humid areas is an evergreen; in the driest areas, it is deciduous in the arid season, losing most of its leaves between February and April, and putting them back in April and May.
The trunk is cylindrical, straight and can be unbranched up to 25 meters and up to 200 cm in diameter.
The foliage has a wide and spherical shape. The bark is deeply fissured in the younger specimens but the cracks gradually become more superficial as the tree matures.
This species has a tendency to develop a long and deep tap root even at a young age.
The leaves are oblong to oval in shape, 10-20 cm long and 6-12 cm wide, with 12-14 pairs of lateral veins.
The flowers are creamy yellow, about 2 cm in diameter, and are carried in large and showy clusters. The flowers are pollinated by thrips.
The fruits are small, oval in shape and measure about 0.8-1 cm in diameter. Each fruit has 5 wings measuring 5 – 7.5 cm in length and 3 of which are longer than the other 2.

Cultivation –
Shorea robusta is an evergreen tree that can grow up to 50 meters in height in fertile soils but reaches lower heights in poorer soils.
For its cultivation it should be taken into account that it is a plant of the tropics, where it is found at altitudes up to 2,000 meters. It grows best in areas where annual daytime temperatures are between 28 and 34 ° C, but can tolerate between 7 and 47 ° C. Furthermore, the plant can survive temperatures down to about -1 ° C; it prefers an average annual rainfall in the range of 1,500 – 3,500 mm, but tolerates 1,000 – 7,300 mm and, usually, in areas with a dry season of 4 – 8 months.
For cultivation it prefers a position in full sun, but tolerates light shade and grows in most fertile and well-drained soils, although it prefers a moist sandy substrate with good subsoil drainage and a pH between 5 and 6. 7, tolerating between 4.5 and 7.5.
Young trees grow rapidly, developing a long taproot at a very young age and reaching heights of up to 6 meters after 6 years.
Fruit and seed production starts around 15 years, the tree bears fruit regularly every 2 years or so and a good year of fruiting can be expected every 3 – 5 years.
The tree responds well to the coppice and rotations of 30 – 40 years are used when practicing the regeneration of coppice and 80 – 160 years for the regeneration of high forests.
The tree is very tolerant of bush fires, usually surviving if it is not too small.
Propagation can take place by seed which does not require pre-treatment, but it is advisable to soak the seed for 12 hours before sowing.
The seeds are sown in seedbeds, where they are covered with a mixture of sand and earth (1: 1) or with a thin layer of sawdust.
Fresh seed germination is generally good and quick. Approximately two weeks after germination, when the seedlings are 5 – 6 cm tall, they are potted in individual containers of about 15 x 23 cm with good drainage holes at the base.
It is normally recommended to use a mixture of forest soil and sand (in a 3: 1 ratio) as a potting medium to introduce the appropriate mycorrhiza to the roots. The seedlings must be placed with a shading of 50 – 60% and watered twice a day.
The transplant can take place when the seedlings are 30 – 40 cm high; however it is advisable to have the seedlings lignify in full sun for a month before planting them.

Preparation Method –
In India, the seeds are also cooked in a porridge with other ingredients. The seeds are also ground into a coarse flour to make bread and oil from the seeds of the Sal tree, which is also mined commercially and used as a substitute for cocoa butter. The “seed butter” is also used in cooking and the plant itself is also consumed.
The leaves are also used fresh to serve freshly made paan (betel nut preparations) and small snacks such as black, boiled beans, golgappa, etc. Used leaves / crockery are readily eaten by goats and livestock that roam the streets freely. The tree has therefore significantly reduced the consumption of polystyrene and plastic dishes in northern India which would have caused a heavy impact on the environment in a country that still has poor sanitary conditions in many regions. In southern India, plantain and banana leaves are used instead. In Nepal, sal leaves are used to make local dishes and vessels called “tapari”, “doona” and “bogata” in which rice is served with curry. However, the use of such “natural” tools has declined sharply over the past decade.
The resin of the sal tree (ṛla in Sanskrit) is used as an astringent in Ayurvedic medicine. It is also burned as incense in Hindu ceremonies.
The seeds and fruit of Shorea robusta are a source of lamp oil and vegetable fats. An oil is also extracted from the seeds which, once refined, is used in cooking food.