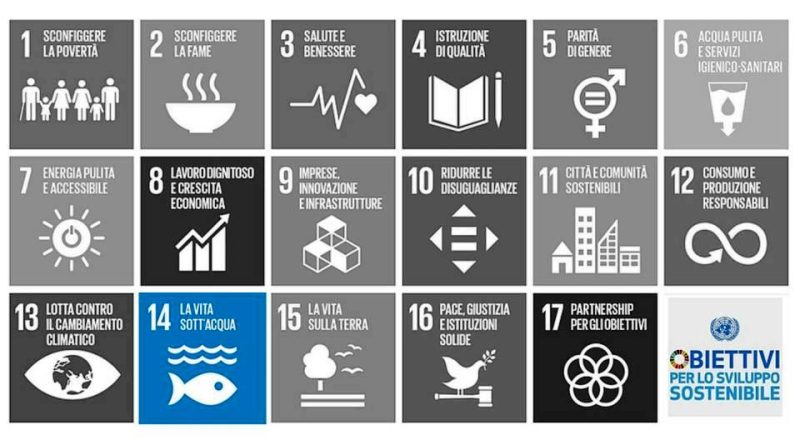 Conserve and sustainably use the oceans, seas and marine resources

Goal 14 of the 2030 Agenda program intends to significantly reduce all types of marine pollution by 2025 and to bring ocean acidification to a minimum. Already by 2020, marine and coastal ecosystems will have to be managed and protected in a sustainable way. Fisheries will also need to be effectively regulated by 2020. To put a limit on overfishing in the seas, illegal and unregulated activities in this field as well as destructive practices will have to be eradicated by 2020. In addition, certain forms of fishing subsidies will have to be banned.
We know how pollution and overexploitation of the oceans are causing an increasing number of problems, such as the acute danger to species diversity, the acidification of the seas and the increase in plastic waste. In addition to fishing and the industrial exploitation of marine resources, climate change is also causing increasing pressure on ecosystems. The ever-increasing world population will in the future be even more dependent on the resources of the seas.
14.1: By 2025, prevent and significantly reduce all forms of marine pollution, especially that resulting from activities carried out on land, including pollution of marine debris and nutrients.
14.2: By 2020, sustainably manage and protect the marine and coastal ecosystem to avoid particularly negative impacts, also by strengthening their resilience, and take action to restore them in order to obtain healthy and productive oceans.
14.3: Minimize and address the effects of ocean acidification, including through greater scientific collaboration at all levels.
14.4: By 2020, effectively regulate fishing and end overfishing, illegal, undeclared and unregulated fishing and destructive fishing methods. Implement management plans on a scientific basis, so as to restore fish stocks as quickly as possible, bringing them back at least to levels that produce the maximum sustainable yield, as determined by their biological characteristics.
14.5: By 2020, preserve at least 10% of coastal and marine areas, in accordance with national and international law and based on the most accurate scientific information available.

14.6: By 2020, ban those forms of fishing subsidies that contribute to overcapacity and overfishing, eliminate subsidies that contribute to illegal, undeclared and unregulated fishing, and refrain from reintroducing such subsidies, recognizing that treatment special and differentiated for developing and least developed countries that is appropriate and effective, should be an integral part of the negotiations for World Trade Organization fisheries subsidies.
14.7: By 2030, increase the economic benefits of small island developing states and least developed countries by making use of a more sustainable use of marine resources, including sustainable management of fisheries, aquaculture and tourism.
14.a: Increase scientific knowledge, develop marine technology research and transmission capacity, taking into account the criteria and guidelines of the Intergovernmental Oceanographic Commission on Marine Technology Transfer, with the aim of improving ocean health and to increase the contribution of marine biodiversity to the development of emerging countries, especially small island developing states and least developed countries.
14.b: Provide access to small-scale artisanal fishermen to marine resources and markets.
14.c: Enhance the conservation and sustainable use of the oceans and their resources by applying international law, as set out in the United Nations Convention on the Law of the Sea, which provides the legal framework for the conservation and sustainable use of oceans oceans and their resources, as reported in paragraph 158 of “The future we want”.