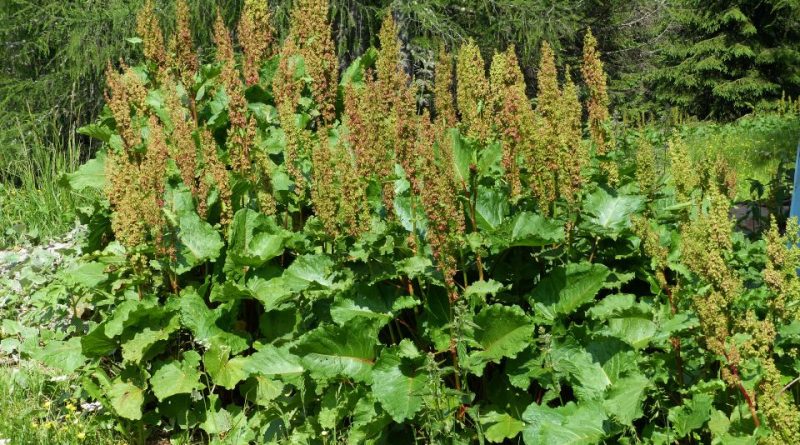 The Alpine Dock (Rumex alpinus L.) is a herbaceous species belonging to the Polygonaceae family.

Etymology –
The term Rumex comes from rumex javelin, spear: due to the pointed shape of the leaves of many species of this genus. Already in Plautus and others with the meaning of romice.
The specific epithet alpinus comes from Alpes, the mountain range of the Alps: from the Alps, alpine in a broad sense, from high mountain environments on any continent. It should be remembered that in some etymological texts they distinguish between alpinus, relative to the altitudinal range beyond the limit of the plants, and alpester, of the underlying altitudinal range, but the authors in publishing new species rarely adhered to this subdivision.

Geographic Distribution and Habitat –
Rumex alpinus is a species with a European-Caucasian distribution, present from central and southern Europe to western Asia – from Germany to Spain, to eastern Ukraine and through the Balkans to Turkey and Iran. It is also naturalized in some areas of the north such as in Great Britain.
In Italy it is present in all regions except in Puglia.
Its optimal habitat is that along the banks of streams and at the edges of roads, it is also found near human settlements, in hilly areas, wooded slopes, coppices at average altitudes between 1600 and 2300 m. 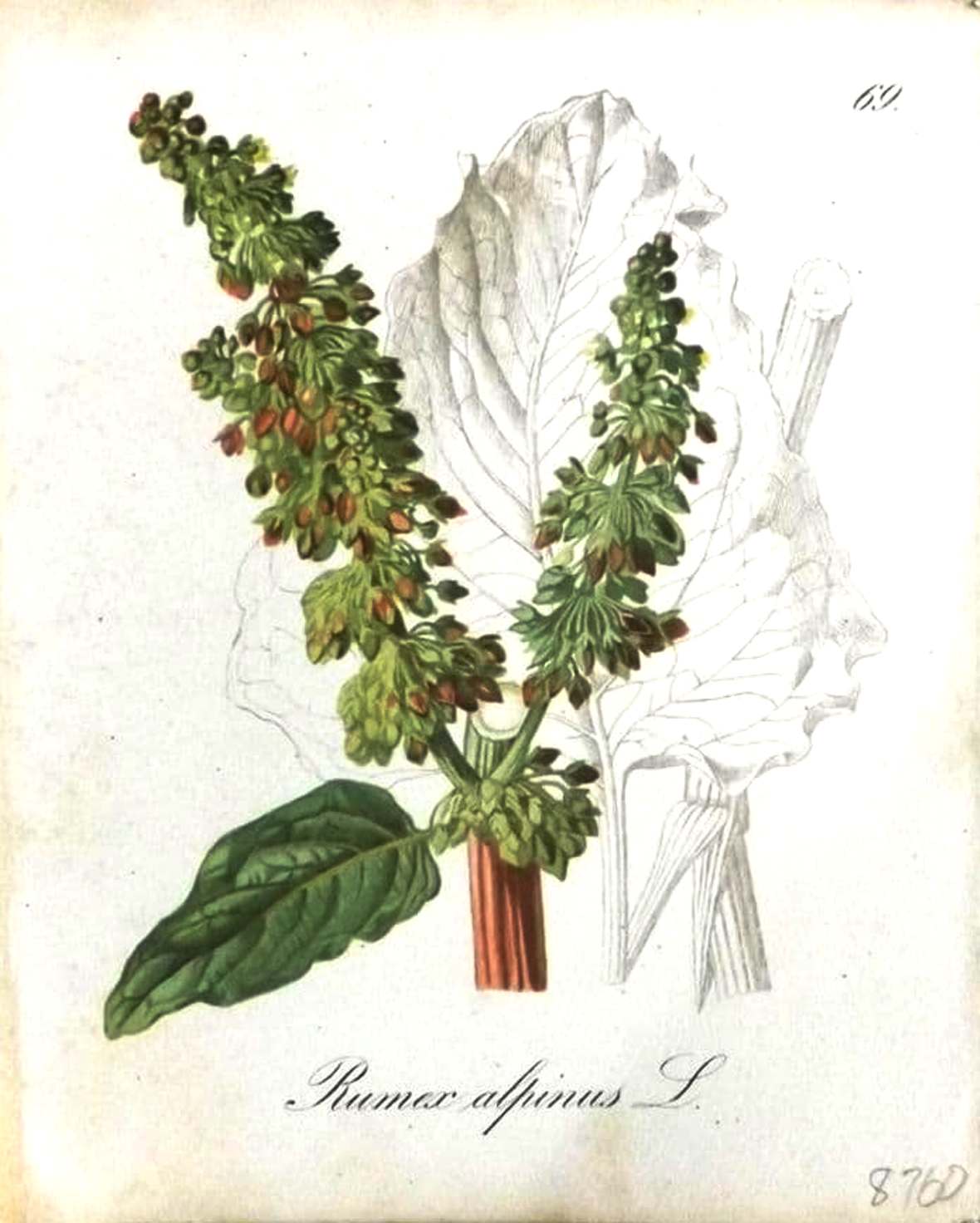 Description –
Rumex alpinus is a plant that grows from a large creeping rhizome, from which numerous rootlets branch off, up to a height of 60-150 cm.
The stem is erect, striated, branchy.
The leaves are very large, ovate / round, with a heart-shaped (corded) indentation base and an irregular margin; the basal leaves are with grooved petioles, glabrous surface with a dense interweaving of veins; the upper ones are small and with a more elongated shape with reddened central petioles and ribs.
The flowers are gathered in dense, elongated terminal panicles.
The flowering period is: July-August.
The fruits are pedunculated and pendulous with whole or finely denticulated valves, rusty, trigonal achenes, with an elliptical profile, brownish or greenish-brown, 2.5-3.5 x 1-2 mm. The seed is black and shiny.

Cultivation –
Rumex alpinus is a plant that, in its natural state, grows in heavily fertilized meadows, very often near the malghe, near the dunghill, on fresh soils very rich in nitrogenous substances, from the mountain to the alpine belt.
The plant is harvested in nature for local use as a food, medicine, and source of materials.
It was once grown for its edible leaves and was also grown for medicinal uses.
It is a very easy plant to grow that succeeds in most soils, preferring moist soils, well equipped with nitrogen and in a sunny position.
This plant, being pollinated by the wind, easily hybridizes with other plants of the same genus.
Propagation occurs by seed; sowing carried out in spring. The seed can also be sown as soon as it is ripe; in this case it will sprout quickly and provide edible leaves from early spring the following year.
The propagation can also be by agamic way, through division in the spring period. Division is easy almost any time of the year, although plants take root more quickly in spring.

Customs and Traditions –
Alpine Dock, in the past, in the Alps, was used as a medicinal and edible plant: the root was used as a laxative (substitute for rhubarb) and the leaves were eaten cooked like the spinach; however, the plant contains considerable quantities of oxalic acid and prolonged consumption can favor kidney stones.
Its pharmaceutical properties are: Laxative, diuretic, purifying, choleretic. It has approximately the same characteristics and properties as the famous Chinese rhubarb; the rhizome, which constitutes the drug, has mainly laxative, purifying, diuretic and choleretic properties, together with the bitter-tonic and digestive ones.
In food use, raw or cooked leaves are used.
They have a strong flavor; the leaves can be used in salads from late fall to spring, but are best cooked like spinach.
Fresh leaves may be available for most months of the year, except during the harsh winters period. In summer the leaves often turn bitter.
Among other uses, it should be remembered that from the roots it is possible to obtain dyes from dark green to brown and dark gray that do not require a mordant.

Preparation Method –
Alpine Dock is a plant that, like other spontaneous ones, was once harvested in its natural state but also cultivated.
Today its use has unfortunately decreased but it is a plant of considerable interest both for food and medicine.
The leaves can be used in salads, but the most common use is to use them cooked like spinach. The leaves can be dried for later use.
The roots are harvested in early spring and dried for later use.