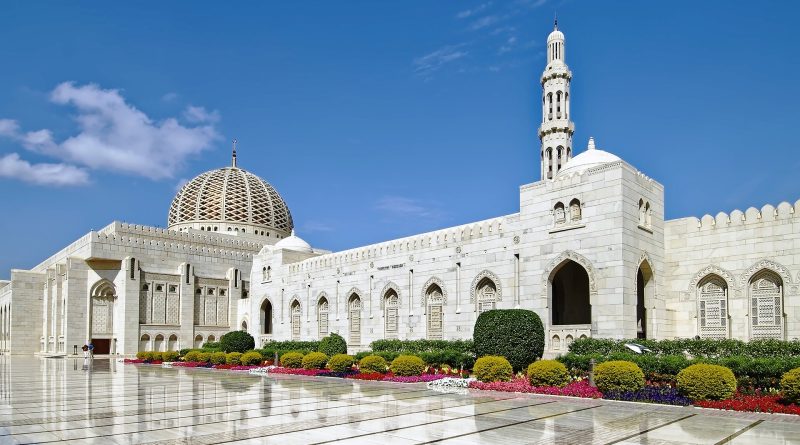 Oman is an Asian sultanate located in the southeastern portion of the Arabian Peninsula.
This country, with an area of ​​309,501 km², has a population of 3,840,000 inhabitants (31 December 2015) and has Muscat as its capital, with a 1,310,826 inhabitants (2015).
Oman borders the United Arab Emirates to the northwest, Saudi Arabia to the west and Yemen to the southwest. It overlooks the Arabian Sea to the south and east, the Gulf of Oman to the northeast. The exclaves of Madha and Musandam, which border the United Arab Emirates, also belong to Oman; the second is bathed by the Strait of Hormuz and the Gulf of Oman.

Geography –
Oman is a country bordered to the southwest by Yemen, to the south and east by the Arabian Sea, to the north by the Gulf of Oman, to the northeast by the United Arab Emirates, and to the west by Saudi Arabia. . A small exclave, the Ruʾūs al-Jibāl (“the Peaks of the Mountains”), occupies the northern end of the Musandam peninsula near the Strait of Hormuz; this territory offers Oman the only coastline on the Persian Gulf. Island territories include the island of Maṣīrah to the east and the island of Al-Ḥallāniyyah (the largest of the five Khuriyyā Muriyyā islands) 40 km off the southern coast.
The northern part of this country is dominated by three physiographic zones. The long and narrow coastal plain known as Al-Bāṭinah stretches along the Gulf of Oman. The high and rugged Ḥajar mountains extend to the southeast, parallel to the gulf coast, between the Musandam peninsula and a point near Cape al-Ḥadd at the eastern end of the Arabian peninsula. Most of the chain reaches altitudes above 1,463 m; Mount Shams (“Mountain of the Sun”), 2980 m high, is the highest point in the country. The great central watershed of Wadi Samāʾil separates the Ḥajars into a western and an eastern range. An inland plateau slopes southwest of the Ḥajar Mountains to the great Rub ‘al-Khali (“Empty Quarter”) desert, which the sultanate shares with Saudi Arabia and Yemen.
These areas can be further divided into some unofficial regions: Al-Bāṭinah; the mountains and associated valleys of the Eastern and Western Ḥajar ranges; the inner area of ​​Oman, or Al-Jaww (the central hills and valleys of the inner side of the Ḥajar mountains and the historical heart of Oman); the Al-Ẓāhirah (the semi-desert plain west of the interior of Oman, near the United Arab Emirates, including the oasis of Al-Buraymī); the Al-Sharqiyyah (sandy plains located east of inland Oman behind the Ḥajar mountains); and the Jaʿlān (facing the Arabian Sea south of the al-Ḥadd cape).
The southern region of Dhofar (Ẓufār) is separated from the rest of Oman by a few hundred kilometers of open desert. The coastal plain of Dhofar is made up of fertile alluvial soil, well irrigated by the southwest monsoon. Mountain ranges covered with woods, which rise up to about 1500 m, form a crescent behind a long and narrow coastal plain, where the provincial capital, Ṣalālah, is located. Beyond the mountains, the gravel expanses gradually merge northward with the Rubʿ al-Khali.
As for hydrography, Oman has no permanent freshwater surfaces. Streams are briefly seasonal from seasonal storms and generally dry up quickly. Considerable efforts have been made in recent years to build dams in an effort to prevent spills and control flooding.

Climate –
The climate of Oman is of the tropical arid type, with a torrid heat (up to over 45 degrees the average maximum temperature of the deserts) in the most internal areas, tending to sultry as there it approaches the coast due to the accentuated evaporation of sea water and the absence of rain that dilutes the extreme intensity of the sun’s rays, which persist for months (an example is the summer climate of Muscat). Here average maximum temperatures between 35 and 40 degrees are contemplated, but the perception can exceed 60 ° C over the course of some periods. Winter is very mild since the country is located at a latitude almost entirely included in its own tropical belt. The atmospheric precipitations are therefore negligible and the strongly recommended period to visit the country goes from mid-October to the first week of March precisely at the time of the very few rains and the least intense sun of the year (however it is a very present sun). 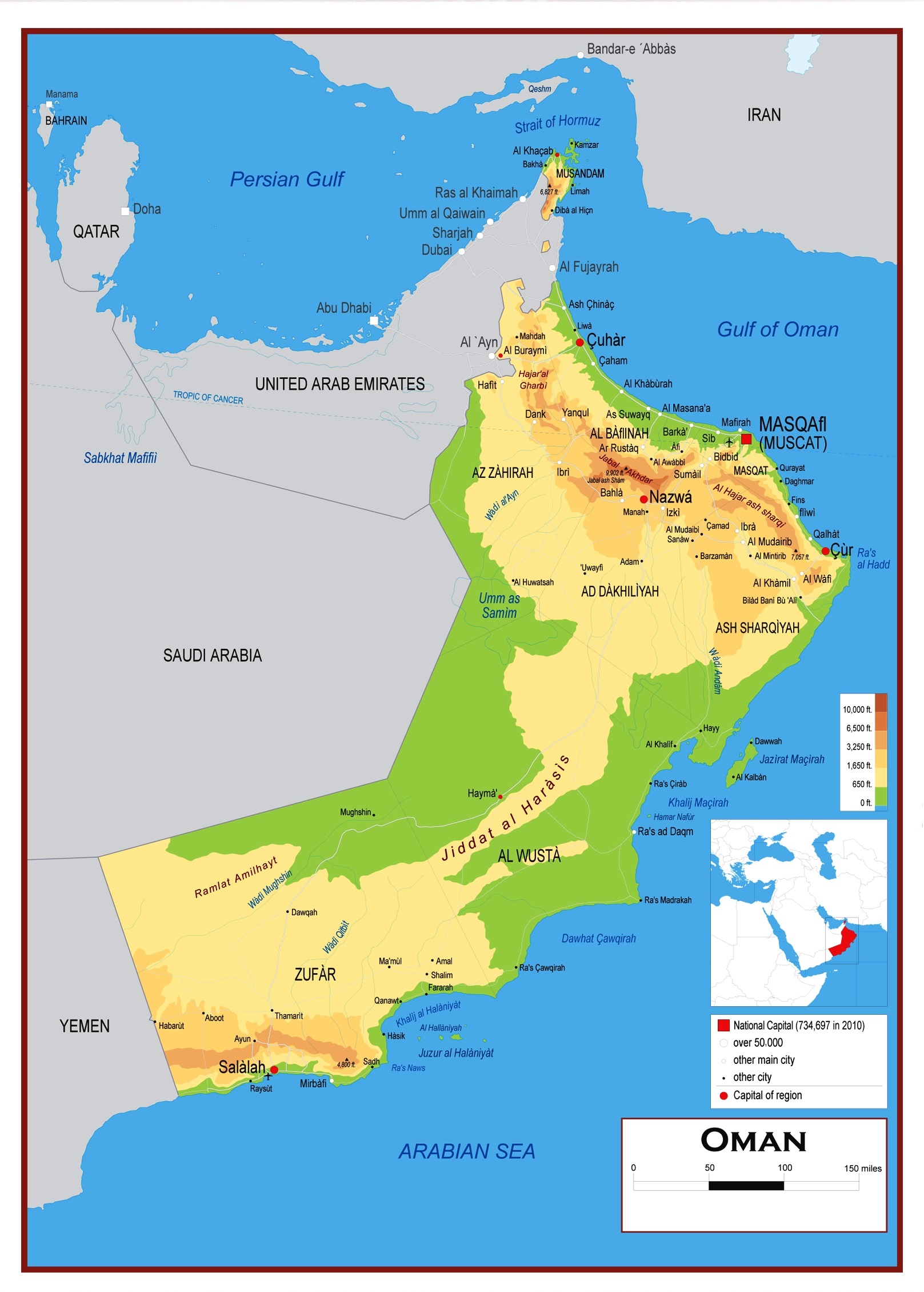 Flora-
Oman is one of the Arab states most aware of the need to conserve its wildlife. He is a signatory to a number of treaties on global issues and some areas have been reserved for nature reserves. Measures were put in place to protect the beaches where endangered green sea turtles breed, a leopard conservation fund was established, and in 1994 the Arabian Oryx Sanctuary was established, which has become a site of the UNESCO World Heritage Site. The government of Oman subsequently reduced the size of the protected area by around 90% to allow for oil exploration and, in 2007, the sanctuary became the first World Heritage Site to be cleared.
The flora of Oman is obviously affected by low rainfall; this is sparse, except for the areas where there is irrigation, which is provided by an ancient system of water channels known as aflāj (singular: falaj). The canals often run underground and originate from wells located near the bases of the mountains. The entire aflāj system was declared a UNESCO World Heritage Site in 2006.
In general, as regards the predominant vegetation, the acacia trees form almost all of the little existing vegetation cover, and the soil is extremely rocky; plant species are protected within natural reserves.
Over four hundred plant species have been recorded in eastern Arabia. The most famous is probably the Boswellia sacra, the frankincense tree, which grows only in the mountains of southern Oman, Yemen and Somaliland. Although many parts of the coast are rocky, the coastal plains of the Al Batinah region and the Dhofar region are bordered by dunes and salt marshes. Salt-tolerant plants flourish here, and dominant species include Zygophyllaceae, sea lavender, and white mangrove. Many of Al Batinah’s salt-tolerant plants differ from those on the south coast, and plants such as Salola drummondii, Bienertia cycloptera, and Rosmarinus Salsola are also found in the Irano-turanica Region.
Sabkhas (salt plains) with hypersaline conditions are typically characterized by an absence of vegetation. In some cases, plant life can be housed on small sandy mounds in these sabkhas known as nabkhas due to their relatively low salinity levels.
In the south of the country, monsoon rains create a wealth of vegetation that is not present in the driest regions.

Fauna –
For some years now, the government of Oman has also begun to protect rare animal species, such as the Arabian oryx, the Arabian leopard, the mountain goat and the leatherback turtle. One of the last places the Arabian leopard survives is the Dhofar Mountains in southern Oman, and the Jabal Samhan Nature Reserve was established to protect these critically endangered big cats. Other carnivores found on the reserve include the striped hyena, Blanford’s fox and the Arabian wildcat. The central area of ​​Oman has vast expanses of gravelly desert with very little vegetation. The Arabian Oryx Sanctuary was set up here to aid in the conservation of the Arabian oryx, and is also a refuge for the sand gazelle, mountain gazelle, Nubian ibex, honey badger, red fox, the caracal, the sand cat and the Arabian wild cat.
In addition, over five hundred bird species have been recorded in Oman.
Some of these are resident, others arrive in spring to reproduce, starting by autumn. Still others are in transit, on the migratory routes between the Palearctic kingdom, Africa and the Indian subcontinent. The east coast with its mudflats and lagoons is visited by many species of waders, and mangrove areas are home to the red lapwing and collared kingfisher. The coast and offshore islands are home to gulls, terns and cormorants. The mountainous north of the country attracts many passing passerines, desert areas are home to the endangered sand partridge houbara bustard. Four species of sandgrouse, desert larks, pipit, wheatears and buntings. The mountains also attract golden eagles and Egyptian vultures. The Dhofar region in the south has a large variety of nesting and migratory species. The Oman owl (Strix butleri) is an owl species discovered in 2013, and is believed to be the only bird endemic to Oman.
Oman has about sixty-four species of reptiles; these include lizards, skinks, geckos, agamis, and a single species of chameleon. Most of the 12 snake species in the country are harmless, but the horned viper, carpet viper, viper, and cobra are venomous. There are only three species of amphibians, one of which is the Dhofar toad.
The number of freshwater fish found in the country is limited because there are few permanent water bodies. Oman garra is a fish found in the northern mountains and also has a blind version that lives in caves.
Oman is also rich in marine diversity, especially cetaceans. There is a population of humpback whales that may be the most isolated, perhaps the most endangered and the only non-migratory population in the world. Outside Muscat there are other humpback whales, pygmy blue whales, Bryde’s whales, sperm whales, false killer whales, grampo, dolphins, bottlenose dolphins, Indo-Pacific humpback whales, dolphins and the occasional killer whale.