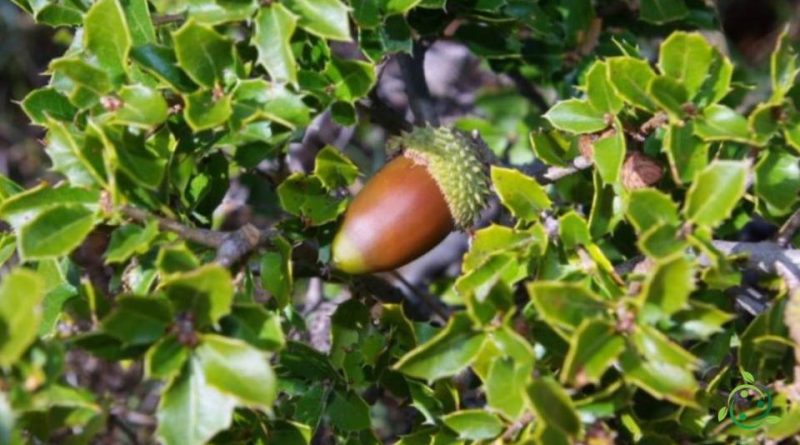 The thorny oak (Quercus coccifera L., 1753) is an evergreen shrub of the Fagaceae family, widespread in the Mediterranean basin and native to North Africa and south-eastern Europe. In Italy it is sporadically present in Sicily, Sardinia, Liguria, Puglia and Calabria.
It is a monoecious plant with unisexual flowers. The male flowers are gathered in yellowish pendulous catkins; the female ones are solitary or gathered in small groups. The acorns are 2-3 cm ovoid in shape with a dome covered with thorny scales.

Cultivation –
The thorny oak is a typical plant of the driest Mediterranean scrub that grows on stony, poor, steep soils, but where possible it prefers fertile, deep, clayey and more or less heavy soils without particular demands in terms of pH.
For its cultivation, it should be borne in mind that it is a species that tolerates limestone and strong winds, but does not tolerate exposure to the sea. It is not a hardy plant, but it can withstand temperatures of -15 ° C.

As for the plant, as with all oaks, the Quercus coccifera also propagates by seed as soon as it is harvested, directly outdoors, protecting the sowing site from mice and squirrels.
Acorns can only be stored if a certain humidity is guaranteed, since if they dry out they immediately lose vitality. The seedlings must be planted very early (within the first two growing seasons), because the root system of the Thorny Oak is highly intolerant to the disorder, so much so that it has been found that the best specimens are always those sown directly in situ.

Uses –
Thorny oak is a hardy and rustic plant, adapting to poor and stony soils and arid conditions. The very hard wood is used as firewood. In the past, a scarlet red dye was extracted from the dried and pulverized adult females of an insect (Chermes vermilio) that lives on the branches of the thorny oak.