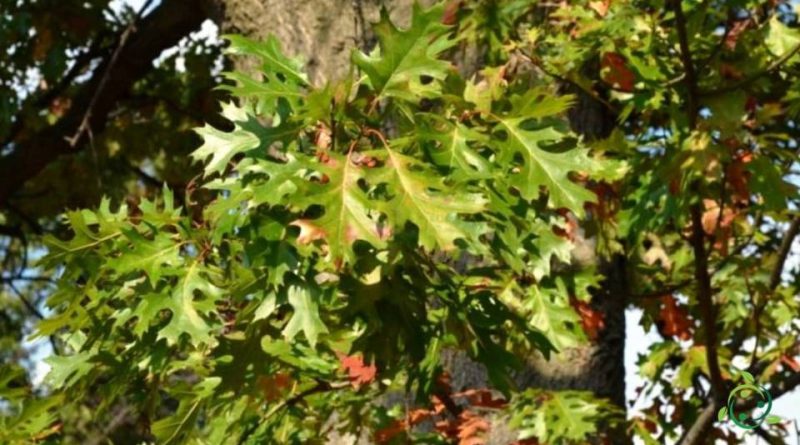 The Scarlet Oak (Quercus coccinea Münchh., 1770) is a plant native to the eastern United States which was introduced in Europe at the end of the 17th century.
In North America it forms mixed deciduous forests on acidic, shallow and dry soils. Introduced in Europe, it is used as an ornamental tree in parks and road trees.
This plant has male flowers arranged in catkins and the female ones, single or in pairs, have a very short peduncle. The acorns mature in two years, with a 1-1.5 cm dome, very shortened pericarp and almost completely covered by the convoluted edge of the dome.

Cultivation –
Let’s see how Scarlet Oak is grown.
For its cultivation it should be borne in mind that they are plants that develop without problems in any position, preferring places with good insolation; they do not fear the cold, even if it may be necessary to shelter the young specimens recently sheltered from the cold and wind. Furthermore, phenomena of chlorosis can arise in calcareous soils. As far as water needs are concerned, the Quercus coccinea is satisfied with the rains, although it may need watering in the event of long periods of drought during the summer months; as for the very young specimens, recently sheltered, they need watering from March to September, to be supplied when the soil has been dry for days.

For the planting of the plant, the Scarlet Oak must be planted in a place with soft, loose, deep and very well drained soil, making a good-sized pit, and working the soil in mixture with a little sand, little manure and a good quantity of soft, permeable, good quality soil, to make sure that the new roots sink into a soil that is not too compact.
For its multiplication, in autumn it is possible to take scarlet oak cuttings, preferring the branches not yet completely lignified; in autumn it is also possible to sow the acorns, avoiding to bury them completely. We remind you that the acorns do not germinate very easily, it is therefore advisable to lightly scratch the surface with sandpaper, to allow the water to penetrate them, also remember to sow more acorns, because the young oak sprouts dry with great ease.

Uses –
The Scarlet Oak is a plant that is mostly used as an ornamental essence. It has no uses for wood which is hard, low in tannins and easily rotting.