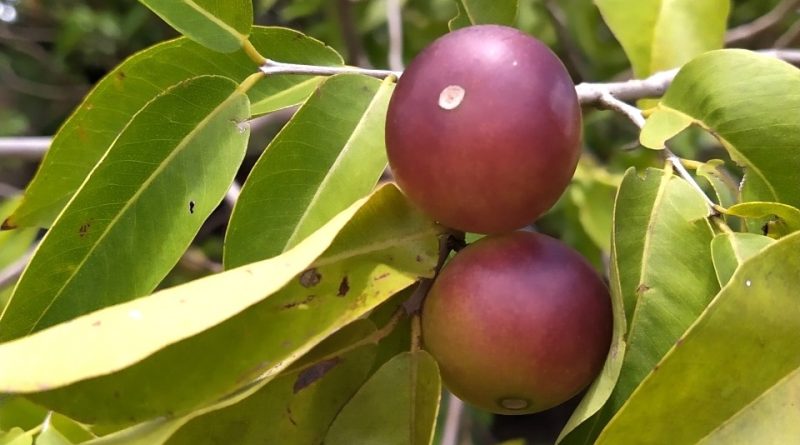 The camu-camu (Myrciaria dubia (Kunth) McVaugh, 1963) is a shrub species belonging to the Myrtaceae family.

Etymology –
The term Myrciaria is an etymological alteration of the Latin myrtus “myrtle”.
The specific dubia epithet comes from doubt, uncertain, hesitant: of uncertain attribution.

Geographic Distribution and Habitat –
The camu-camu is an endemic plant of the Amazon rainforest where it is found mainly along the Ucayali and Amazon River rivers and their tributaries, especially in the sector located between the localities of Pucallpa (on the Ucayali River) and Pebas (on the Amazon River).
Its current distribution is that of the Amazonian plains of Colombia, Ecuador, Peru, Bolivia and Brazil and extends from the center of the state of Pará, in Brazil, along the middle and upper Amazon River to the eastern part of Peru; to the north it appears in the Casiquiare and in the upper and middle Orinoco river. In Brazil it is found in Rondônia along the Maçangana and Urupa rivers and in Amazonas, in the municipalities of Manaus and Manacapuru and along the Javarí, Madeira and Negro rivers.
Its habitat is that of forests, where it is often found in flooded areas with the lower half immersed in water. 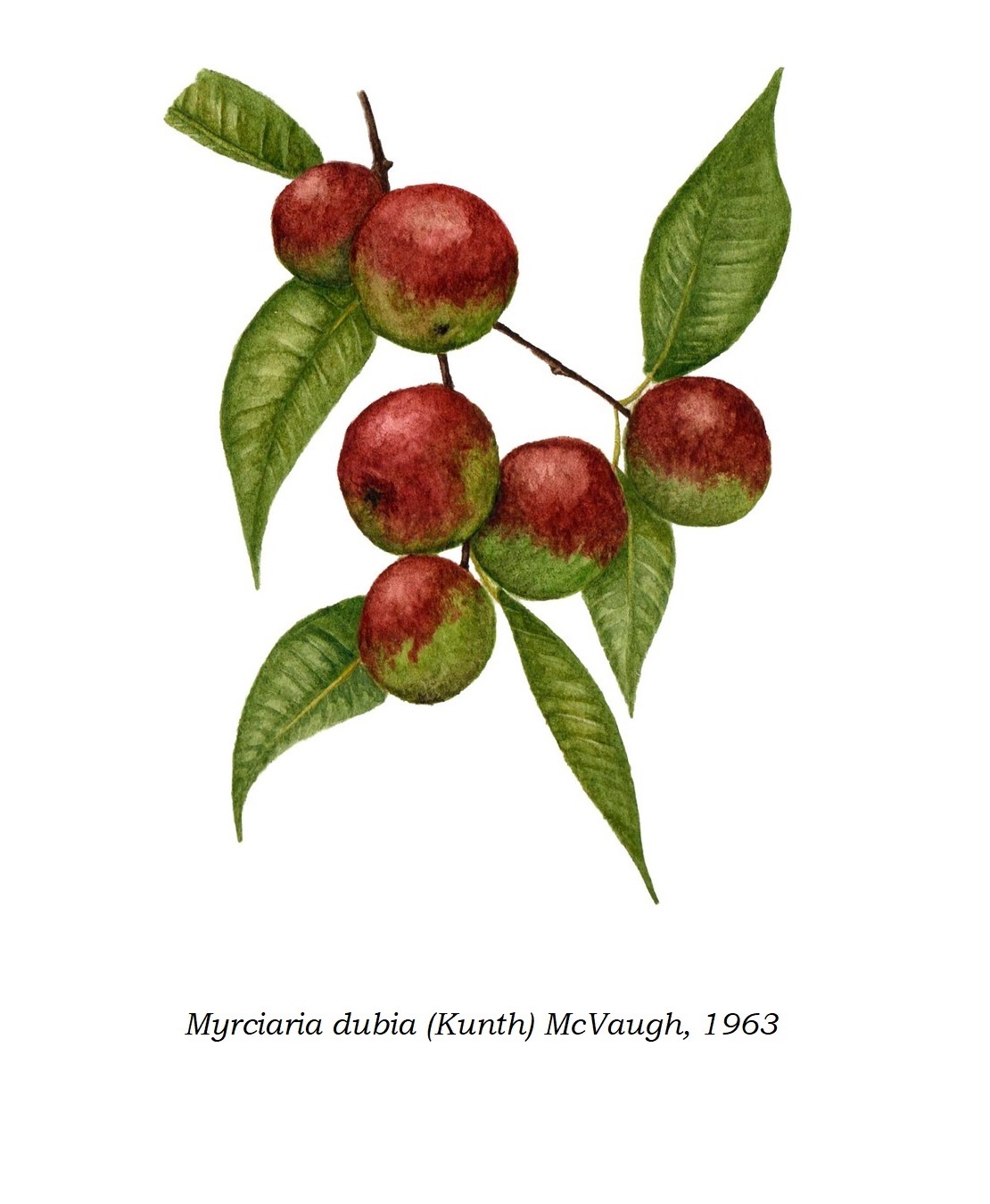 Description –
Myrciaria dubia is a shrubby plant that grows between 3 and 5 meters but can reach up to 8 m in height.
The leaves are opposite evergreen, lanceolate to elliptical in shape. Individual leaves are 3-20cm long and 1-2cm wide. The foliage is bushy and feathery.
The flowers are small with waxy white petals and a sweet aroma.
The fruit is brown or purple-black when fully ripe, about 25mm in diameter, with sweet or sour flesh.

Cultivation –
The camu-camu grows in its natural state mainly in western South America, Brazil, Peru, Colombia, Ecuador, Venezuela and Guyana.
It is a plant of the humid tropics that prefers a fertile, deep and humus-rich soil, in addition it has a high need for iron.
The plant is relatively easy to grow under certain growing conditions. It survives best in warm, humid and tropical climates, but grows in subtropical climates, surviving temperatures just above freezing. It requires a lot of water.
The plant is extremely tolerant to flooding, withstanding four to five months with the roots and even much of the aerial parts submerged in water. The species propagates by seed. In cultivation, the tree begins to bear fruit after reaching 2 cm in circumference of the stem (three years after the emergence of the seedling). The plants bloom at the end of the dry season and bear fruit at the height of the rainy season. Observations with wild and cultivated plants suggest that trees can remain productive for several decades.
Wild trees have been found to produce 12 kg of fruit on average. At the suggested planting density of 600-1100 trees per 1 hectare, about 12-13 tons of fruit can be obtained.

Customs and Traditions –
Myrciaria dubia, commonly known as camu-camu, camucamu, caçari, araçá-d’água or camocamo, is a plant that produces red / purple fruits similar to cherry with 2-3% of the fresh substance by weight which is vitamin C.
In fact, the plant is grown to use the fruit that contains a lot of vitamin C.
The plant has long been used by indigenous peoples where the wild fruit of the camu-camu is collected directly in canoes. The fruit has only recently entered large-scale cultivation and sale on the world market, with Japan as the main buyer. Fair trade is present in lowland production by the Association of Camu Camu Producers of the Peruvian Amazon.
100 g of fresh fruit have the following average composition:
– Protein 0.4 g;
– Carbohydrates 5.9 g;
– Starches 0.44 g;
– Sugars 1.28 g;
– Dietary fiber 1.1 g;
– Fat 0.2 g;
– Calcium 15.7 mg;
– Copper 0.2 mg;
– Iron 0.53 mg;
– Magnesium 12.4 mg;
– Manganese 2.1 mg;
– Potassium 83.9 mg;
– Sodium 11.1 mg;
– Zinc 0.2 mg.
Furthermore, Vitamin C varies from 1882 to 2280 mg depending on the degree of ripeness.
Vitamin C content decreases when full maturity is reached, with a compromise between vitamin C and flavor expression.
Furthermore, the fruit is rich in flavonoids, such as anthocyanins, flavonols, flavanols, catechins, delphinidin 3-glucoside, cyanidin 3-glucoside, ellagic acid and rutin. Other analyzes revealed the presence of gallic and ellagic acids, suggesting that the fruit possesses hydrolyzed tannins (gallo- and / or ellagitannins).
Unfortunately, the documentation of the traditional uses of the camu-camu is scarce. In traditional Amazonian societies, camu-camu is unlikely to have ever been nutritionally relevant except for its vitamin C content. The fruit is extremely acidic and tastes very similar to that of an unripe grape with a big core. The fruit is often used to make a very pink juice with some sugar (like lemonade). A reddish pigment in the leathery skin of the fruit gives a pink color to the juices extracted from the camu-camu. The aroma is subtle, but it is not as captivating as in the more popular fruits. Recently, camu-camu is used in ice cream and desserts, and the powder processed from the pulp of the fruit is starting to be sold in the West as a health food in bulk powder or in capsules.
In addition, native Amazonian groups living on the banks of the Nanay River in the Loreto region of Peru have been reported to use camu-camu as a traditional remedy for treating malaria.
Unfortunately, from an ecological point of view, currently, the excessive harvesting of the wild camu-camu threatens to make it an endangered species. For this reason, efforts are underway to encourage the commercial cultivation of camu camu in the Amazon River basin.

Preparation Method –
Camu-camu is a plant that has traditionally been used by the Amazonian peoples for its fruits.
These were consumed both for food purposes, in various stages of maturation, and, as reported by some sources, for medicinal uses.
Currently the market is expanding and is moving towards the consumption of this fruit for its high content in vitamin C.