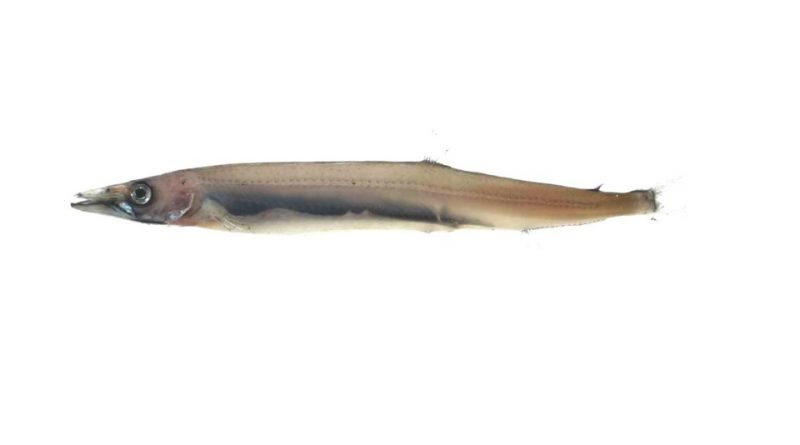 The Spotted barracudina (Arctozenus risso Bonaparte, 1840) is an abyssal fish belonging to the Paralepididae family.

Geographic Distribution and Habitat –
The Spotted barracudina is a fish found in oceans around the world in the meso and bathpelagic area, especially in the Atlantic Ocean and the Arctic.
It is present in the Mediterranean and is distributed along all the coasts of the Italian seas, with the exception of the Middle and Upper Adriatic while it is more common in the Ligurian Sea and in the Strait of Messina, where it is frequently found beached.
This species has pelagic habits of depth and is found in the Mediterranean up to 700 m, while in the oceans it can reach up to 2,200 meters.

Description –
The Arctozenus risso is a fish with an elongated and slender body, partially covered with circular striated scales, with an iridescent silver color with brown fins, with a maximum length of 30 cm. The black abdominal spots are not evident, but they form an almost continuous and not very high uniform stripe.
The head is about 1/4 of the body long and has a pointed muzzle (half head) and medium-sized circular eyes. The nostrils, close together, are located closer to the anterior margin of the orbit than to the apex of the muzzle.
It has a wide mouth and on the premaxillaries there are three or four foldable caniniform teeth and a series of minute canines, which give a jagged edge appearance. On the jaw there are over 10 teeth, of which at least five are very long. Two other similar sets of 8-9 teeth exist on the palatines. The tongue is thin and has two lateral sets of 4-5 teeth in the center.
The ventral fins are inserted below the last rays of the dorsal and the adipose dorsal is moved far back on the caudal peduncle, above the last rays of the anal and almost in contact with the caudal. Anal is long.
However, due to its precise identification, it can be recognized with certainty by the other members of the family only by examining the branchiospina.

Biology –
The Spotted barracudina, like all fish that live in depth, has a biology that is not perfectly known, however it is known that in the Mediterranean, most likely, it reproduces in all months of the year.
It is also a gregarious species and when in a school these fish swim with their heads turned upwards.

Ecological Role –
Arctozenus risso is a bathypelagic species that feeds on crustaceans and larval stages of fish.
It is caught by chance with purse seines equipped with light sources, with deep pelagic trawls and with scientific plankton nets. The meats are good but they have no market.
This fish, which is the only known member of its genus, is an important species for many pelagic predators, such as cephalopods, common dolphins, and albacore.