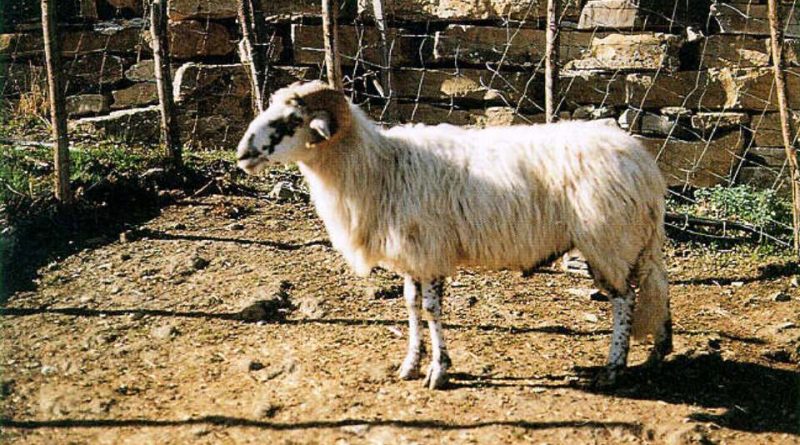 The Pinzirita is a Sicilian sheep breed (Ovis aries Linnaeus, 1758) indigenous, with a main aptitude for milk production.

Geographic and Area Distribution –
The Pinzirita (or Piperita), also known as local Sicilian, common Sicilian or Nostrana or Mascaruna (due to the black face and legs), is a Sicilian breed with a prevalent attitude to milk production.
This breed, originally from central-eastern Sicily and comes from the Asian Ovis aries.
It is a hardy breed that lives in very harsh environments with dry summers and severe winters. It is bred in Sicily and especially in the eastern part, in the provinces of Catania, Messina, Enna and Syracuse.

Origins and History –
The Pinzirita is an almost extinct Sicilian native breed, very confused with the Barbary and other crosses; the barbaresca is an intersection derived from the pinzirita. The main characteristic of the Pinzirita are its resistance and adaptation to the territory as it feeds on even a few brushwood in the dry period and does not require special care.
This breed was penalized for crossbreeding for better yield. In fact, it is still strongly affected by uncoordinated crosses carried out in recent years with Comisani and Barbareschi sheep. Moreover, the breed, due to the neglect of the institutions and the shepherds, is going through one of the worst moments and is in danger of extinction. Currently an association for the protection of Sicilian breeds is taking care of the census of the few remaining animals and recovery will be attempted.
Legend has it that it is the breed of Polyphemus’ herd.

Morphology –
The Pinzirita is a small-medium sized sheep breed.
It has a stocky head, with a slightly sheepskin profile, of an irregular white color flecked with black or dark brown.
The trunk has an almost rectilinear back-lumbar line. The udder is globular, developed and well attached and the nipples are small.
The fleece is open, with long and triangular tufts.
The skin is fine, pink with flecks in the wool-free areas.
The height at the withers is cm. 75 for adult males, with a weight of 72 kg and cm. 64 for adult females, with a weight of 47 kg.

Productive attitude –
The Pinzirita is a rustic breed which, as mentioned, lives in very difficult environments with drought summers and harsh winters. Its main feature is its resistance and adaptation to the territory where it is able to produce in dry pastures and without special care.
Furthermore, the Pinzirita resists better than other breeds in barren environments and is less subject to attacks by parasites.
The prevailing attitude is that of milk production and its average productions are 100 liters (in 100 days of lactation) for primiparas and 150 liters (in 180 days of lactation) for multiparas.
For the production of meat only that of lambs is used.
Furthermore, wool is used for mattresses and pillows and is very soft.