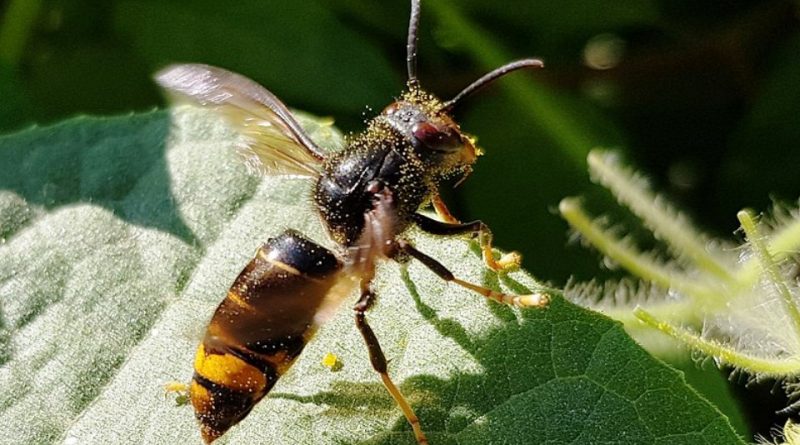 The Asian hornet or yellow-legged hornet (Vespa velutina Lepeletier, 1836) is a hymenoptera belonging to the Vespidae family.

Geographic Distribution and Habitat –
The Asian hornet is a hymenopteran native to Southeast Asia, widely distributed in India, Indochina, China and Java.
Its introduction in Europe was found for the first time in 2005 in France where it was accidentally introduced in the southern part of the country. It later spread to Spain, Portugal, Belgium and Italy.

Morphology –
The Vespa velutina is slightly smaller than the European hornet (Vespa crabro Linnaeus, 1758).
Queens are around 30mm long and males around 24mm.
The workers measure about 20 mm in length.
The species is recognized by the yellow legs of the legs.
The chest is a velvety brown or black color and the abdomen is brown. Each abdominal segment has a narrow posterior yellow border, with the exception of the fourth segment, which is orange.
The head is black and the face is yellow.
The different regional subspecies vary sufficiently in color to cause difficulties in classification, and several subspecies have been variously identified and ultimately rejected; while there is a history of subspecies recognition within many Vespa species, including V. velutina, the most recent taxonomic revision of the genus treats all subspecies names of the genus Vespa as synonyms, effectively relegating them to nothing more than informal names for the regional color of the shapes.
The form causing concern for its invasiveness in Europe has been referred to as V. v. nigrithorax, even if, we repeat, this name no longer has any taxonomic value.
This shape is on average 30 mm long and is recognizable by the dark body and the yellow line that cuts its abdomen, inside which there is a black triangle.
Finally, as regards the recognition of this species, given that the queen in rare cases can approach the size of 35 mm, sometimes the presence of Velutina in Europe is erroneously reported as Vespa mandarinia, much more aggressive, which however does not seem to find documented findings. The confusion is increased by the very definition of Asian hornet, which refers to the area of ​​origin in common with V. mandarinia.

Attitude and Life Cycle –
The Vespa velutina, like other hornets, builds nests that can host colonies of several thousand individuals.
The females of the colony are armed with formidable stingers with which they defend their nests and kill their prey.
The nesting period is long, and a colony commonly begins by building a nest in a low shrub, then abandoning it after a few months and quickly building a new one high up in a tree, possibly as a pest measure. The next generation of young queens disperse in the late fall to hibernate during the winter.
The construction of the first nest takes place by the founding queen of the colony who creates an improvised nest, called an “embryonic nest”. This nest is no bigger than a tennis ball. If the provisional nest situation is suitable, it will serve as the basis for the construction of the colony’s final nest. If not, the first workers will build a new one, which is often on top of a tree (often more than 15m high) but also (less often) can be hung on the facade of a building (gutters, windows … .) and also in bushes, hedges, ferns or in hollows of the ground. The final nest (which is not a hive) is called a “secondary nest”.
The nests are made of chewed wood fibers, and can reach a meter in height and 80 cm in diameter. The largest nests are maintained by thousands of individuals. Generally these nests are spherical or oval in shape, and have a lateral exit hole, unlike those of the hornet (Vespa crabro Linnaeus, 1758), which have their exit in the lower part. Each large nest is home to around 2,000 wasps, and at the end of the season it produces up to several hundred fertile females (potential queens). Of these, those that survive the winter will be the founding queens who will create a series of new colonies the following spring. The workers and the males die before the end of autumn; fertile females diapause in sheltered places, so they will leave their nests empty and will not use them the following year.
It should be noted that the nests built in the canopy of tall trees are difficult to see and find during the spring and summer, hidden by the foliage.
From observation, it is concluded that this species prefers oaks, poplars and acacias but avoids conifers. However, nests can also be found in the most unlikely places.
During the winter, any small, well-isolated area (natural or man-made) can be inspected for the presence of fertile hibernating queens. Garages, sheds, lower decks, cornices, cornices, even holes, uninhabited houses, in the walls or in the floor.
To identify the nest, it is emphasized that it is spherical in shape and in the last stages of construction, which is the end of summer and autumn, it can measure between 70 and 90 cm. height and 40 and 70 cm. diameter.