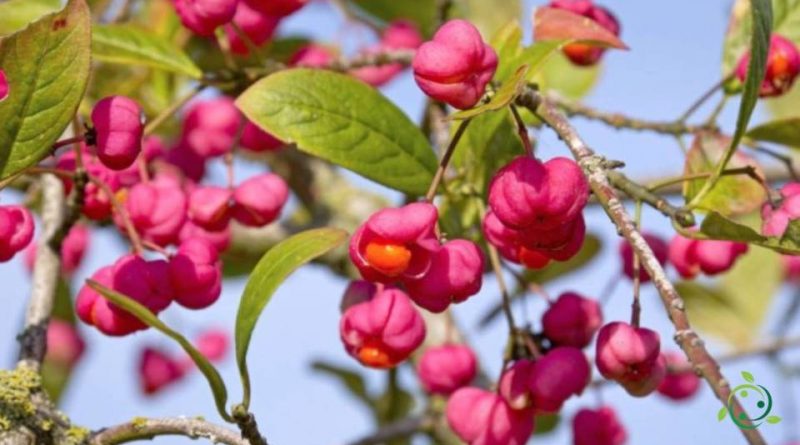 How the spindle is grown

The spindle (Euonymus europaeus L.) is a plant of the Celastraceae family quite widespread in Europe that grows in mixed broad-leaved woods. In Italy it is present throughout the national territory.
Its reproductive structures occur in spring when small white hermaphroditic flowers are formed which, in autumn, give rise to the characteristic red fruits with a curious shape similar to the hat used by Catholic priests (hence the name).
There are several cultivars of this species, interesting from an aesthetic point of view thanks to the brightly colored fruits; Euonymus europaeus “Red Cascade” for example has more marked autumn colors than the species and more abundant pink fruits.

Cultivation –
Euonymus europaeus is a plant that loves sunny or semi-shaded places and resists heat and frost but does not tolerate strong winds.
From a pedological point of view, it prefers compact soils, rich in organic matter and with pH values ​​ranging from neutral to alkaline.
The plant reproduces by seed in spring and can be propagated by cuttings in summer from August to September.
Multiplication by cuttings is recommended as it is faster and ensures plants identical to the mother one.
As for irrigation, this plant, except for the early stages of development, is satisfied with rainwater and should only be watered during periods of prolonged drought. Shrubs grown in pots, on the other hand, require regular and frequent water supplies but only when the soil is completely dry.
For fertilization we recommend the classic pre-planting fertilization, in the hole that will host the young seedling, with organic substance, to be carried out in the period of late autumn or early spring; subsequently an annual fertilization must be carried out to be administered at the foot of the bushes with organic fertilizer, at the end of the winter period.

Uses –
The spindle is a poisonous plant. Due to the beauty of the fruits and leaves, red in autumn, it is widely used in gardens.
The wood, very ductile, was used in the inlay work, and to make the “spindles” for the wool (hence the common name of Fusaggine).
The young, charred branches were used by painters as charcoal.
Due to its ductility, this wood was used in the manufacture of toothpicks, for inlay work and to make bows for violas.
The young branches, charred, were used by painters as charcoal, while the coal obtained from this plant was used in the manufacture of gunpowder.
The oil extracted from the plant can be used for the production of soaps.
The flowers are mainly pollinated by flies; the dissemination takes place by blackbirds, robins, thrushes and other birds, which are attracted by the showy fruits.