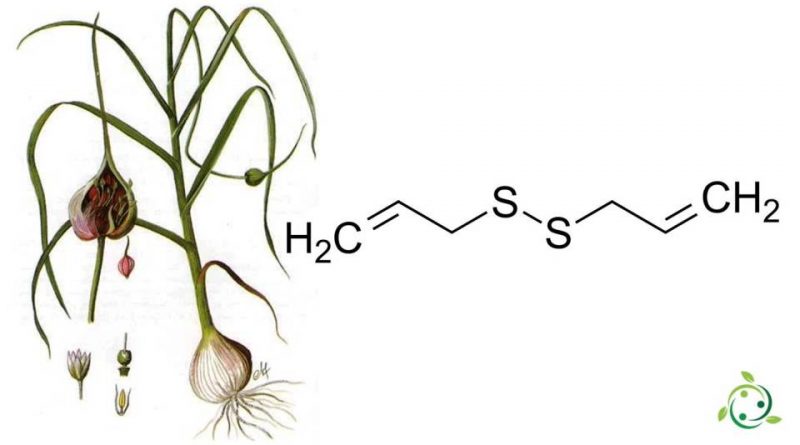 Diallyl disulfide, whose term in the official IUPAC nomenclature is: 3 – [(Prop-2-en-1-yl) disulfanyl] prop-1-ene has a brute or molecular formula: C6H10S2.
Diallyl disulfide is a chemical compound that is abundantly formed in the extract of the essential oils of the bulbous plants of the genus Allium (such as garlic, onion, leek, chives and shallots).
This substance, from the physical point of view, is an irritating and flammable liquid with a characteristic garlic odor, fat-soluble and almost insoluble in water. Its stability compared to the more oxygenated compounds from which it naturally derives make it preferable for use in the food industry
Diallyl disulfide, together with alliin, allicin, ajoene, diallyl trisulfide, diallyl tetrasulfide, is part of the composition of the substances that give, together with terpene essential oils, the characteristic aroma to bulbous plants.
In the biochemical field, the starting substances that lead to the formation of allyl sulphides originate from compounds such as alliin and isoalliine which, subjected to enzymatic action by the alinase, contained in the system of cellular vacuoles of the same plant, convert them into sulfonates, passing for sulphenic intermediates. These reactions take place both in the distillate and in the oily macerate. Depending on the extraction conditions, the reduction to sulphide can then take place.
The diallyl disulfide object of studies regarding the anti-tumor properties of garlic and in particular in relation to the action on carcinomas in general.

In this sense, both in vivo and in vitro studies are underway to ascertain their actual role. Specifically, it is believed that the activity of diallyl disulfide is expressed in the arrest of the cell cycle in the G2 / M phase and in the induction of apoptosis in tumor cells.
However, garlic, together with other bulbous plants, would also perform its action thanks to a wide spectrum of potentially protective compounds, mainly with antioxidant action.
Diallyl disulfide was not known until 1844 when Theodor Wertheim steam-distilled a pungent-smelling substance from garlic and called it “allyl sulfur.” However, only in 1892 Friedrich Wilhelm Semmler was able to identify diallyl disulfide as one of the components of the distilled garlic oil. The natural precursor of diallyl disulfide, allicin, was discovered in 1944 by Chester J. Cavallito and John Hays Bailey. In 1947, A. Stoll and E. Seebeck discovered that allicin in turn can be produced from the cysteine ​​derivative alliin using the enzyme alliinase.