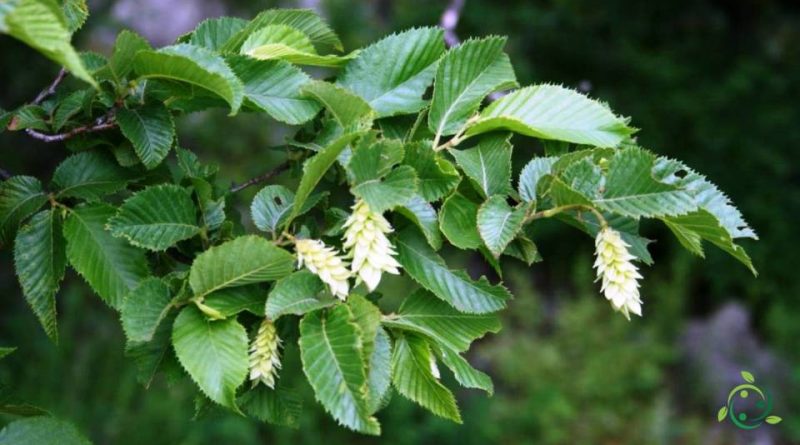 The European hop-hornbeam, also known by the names of ostria or hornbeam (Ostrya carpinifolia Scop.) Is a tree of the Betulaceae family native to south-eastern Europe where it is found in a vast area ranging from southern France to Italy, Balkans to the Middle East and the Caucasus.
The European hop-hornbeam is a tree with a straight trunk and a collected and somewhat elongated crown; its leaves are oval-shaped, elongated and with a serrated edge; the main rib is very evident and in fact they are called penninervie
The reproductive structures are male inflorescences (catkins) up to 10 cm long, the female ones (spikes) are shorter. The plant blooms in April-May. Each female flower is wrapped in a bract which, after fertilization, enlarges and closes in a sac on itself including the pericarp. This lightweight sac facilitates the flight of the fruit and protects the seed during the early stages of germination.

Cultivation –
For the cultivation of the black hornbeam, remember that it is a species that survives between -10 and 37 ° C.
This species has a high ecological adaptability, and in Italy it can be cultivated in hilly and mountainous areas up to 1300 meters where it forms beautiful woods on all the limestone Prealps.
It is a plant that prefers an acid soil, with a good quantity of peat, well drained and rich in humus.
Drainage is essential as any stagnation of water can cause root rot that causes the plant to die.
The young plants should be planted at the end of winter or in autumn and it is advisable to place plenty of well-humified organic substance in the planting hole.
If grown in the open ground, the plant must be irrigated from time to time in the vegetative months, approximately in the period from April to October. If planted in pots, water regularly from March to October.
The European hop-hornbeam is a plant that should be pruned in the late winter period, during vegetative rest, or after flowering, between the end of summer and the beginning of autumn; pruning consists in eliminating crossed, weak or disordered branches to maintain a healthy and lasting shape.
As far as propagation is concerned, this can be done by seed or by rooting the numerous suckers that the plant produces.

Uses –
In the past, European hop-hornbeam wood was used in the production of charcoal and firewood. Difficult to process due to the presence of many irregular fibers. In recent years, it has also been re-evaluated as an essence of landscape interest, also due to its limited substrate needs; it is used to form hedges and road trees by exploiting its sucking capacity.