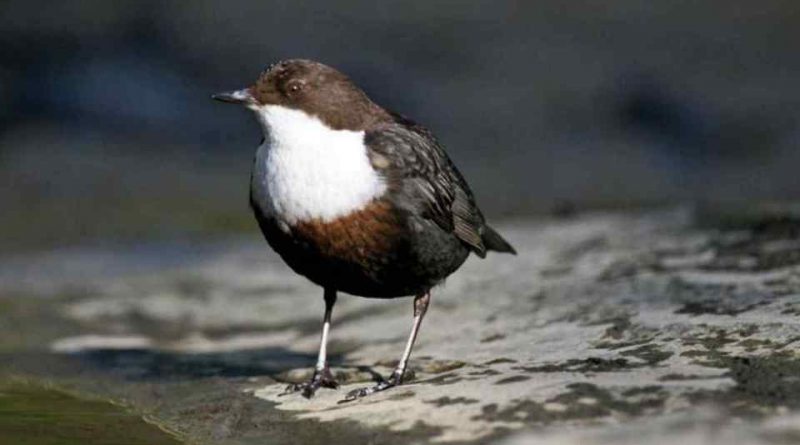 The white-throated dipper or European dipper (Cinclus cinclus Linnaeus, 1758) is a bird belonging to the Cinclidae family.

Geographic Distribution and Habitat –
The white-throated dipper is a species with Palearctic distribution, widespread throughout Europe and Asia.
It is present, albeit discontinuously, in the following geographical areas:
– Magreb – area of ​​the Atlas Mountains in central and north-eastern Morocco, northern Algeria and extreme north-west of Tunisia;
– Europe – Iberian Peninsula, Southwest and French Midi, British Isles, Central Europe, Balkan Peninsula, Fennoscandia;
– Asia – Caucasus, Anatolia, western Iran, European Russia up to the Urals, Pamir, mountainous areas of Turkestan, northern slopes of the Himalayas, as far north as Lake Baikal and central Mongolia;
– Finally, the Cypriot population, and very likely also the Levantine one, are locally extinct.
In Italy, the species is resident throughout the Alps, the Apennines and the western Po Valley, as well as in Sicily and Sardinia.
This species, generally resident, especially with the populations of the northernmost areas of the range that can migrate south in search of more temperate climates, wintering on the coasts of the Baltic Sea, Caspian Sea or Black Sea: even the populations of the higher mountainous areas they can drop in altitude during the winter, to avoid famine due to the freezing of the rivers of residence.
Its habitat is that of fast-flowing streams, with clear and well-oxygenated water and a gravelly bottom, possibly with the presence of outcropping rocks or embankments, where it reaches up to two thousand meters above sea level in the Alps, while in Tibet it exceeds five thousand meters; it rarely goes down to the plains. 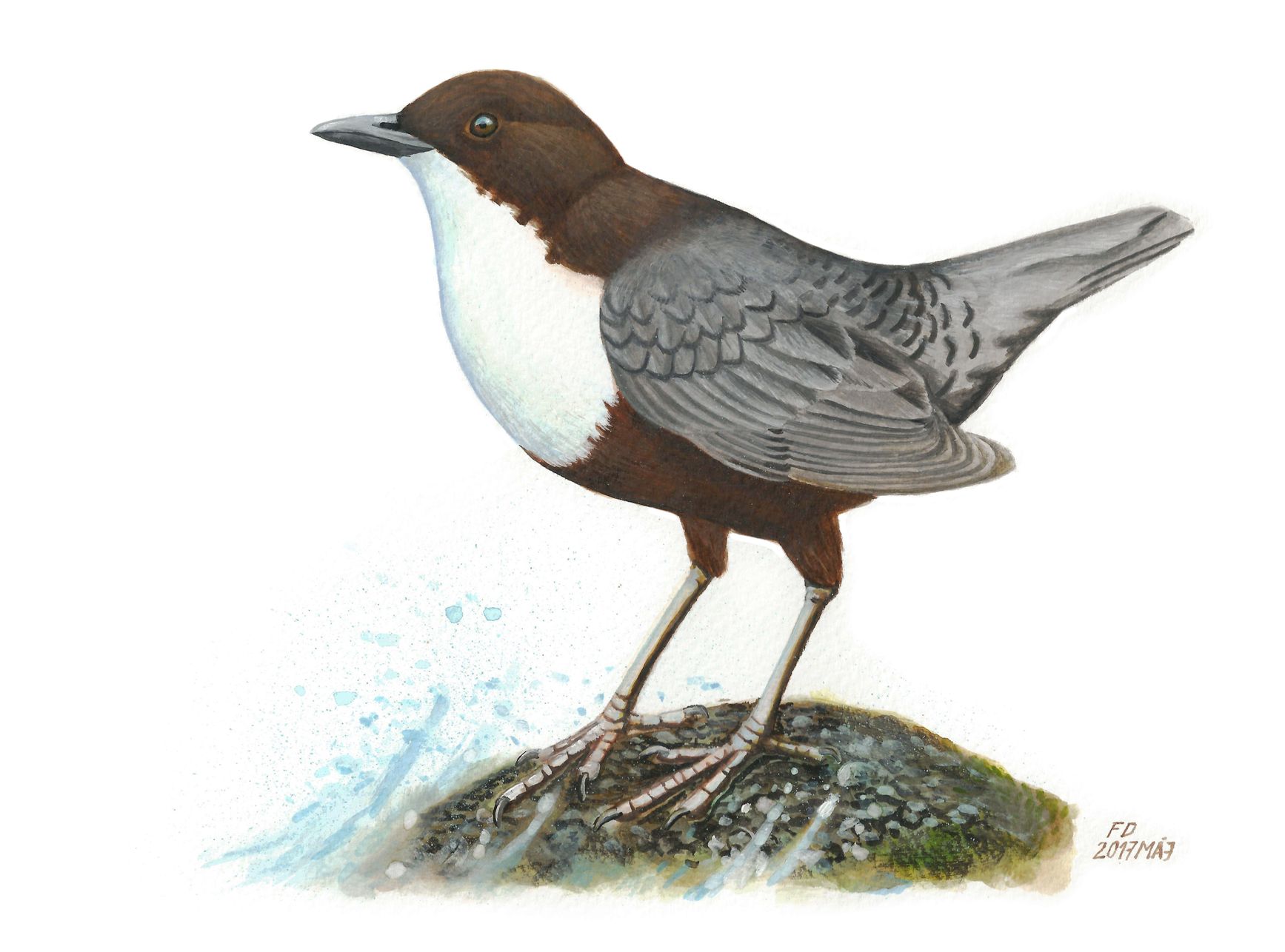 Description –
The Cinclus cinclus is a passerine bird with a length of about 18 cm and an average weight of 65 grams, with the males that can be even a third larger than the females.
In general it presents itself with a stocky and plump appearance.
The large and round head that seems to be embedded directly in the torso, thin and pointed beak, short rounded wings and square tail, with strong legs with long and robust fingers and curved claws.
It has a brown-toned plumage with the exception of the throat and chest, which are pure white in color; the back, the sides, the wings and the tail are instead of a blackish brown-slate color (browner on the wings and tail, darker on the back, which in the distance appears completely black), and the lower part of the chest (just below the end of the thoracic white) and the central part of the belly are hazel-coppery.
The beak is blackish in color, the legs are caramel colored and the eyes are reddish-brown, with whitish-gray eyelids very evident when the animal closes its eyes.
There is also a certain variability of colouration among the subspecies, with the various populations differing in the presence and quantity of the ventral colouration, in the tones of the dorsal and cephalic ones and in the extension of the white of the throat.
On the other hand, there is no sexual dimorphism evident in the coloring.
In flight, it quickly flaps its wings and keeps itself low on the water level.
The song consists of a very pleasant sweet chat, composed of subdued but in tune sounds.

Biology –
The white-throated dipper is a monogamous species with the male courting the female starting to sing with sweet sounds similar to the song of wrens, to attract them near her territory. Upon the arrival of a possible partner, the male begins to fly emitting metallic sounds, while at the same time trying to highlight the whiteness of the throat and chest: if the female does not move away, the mating takes place in a short time.
Since these birds lead an isolated life, couples are formed only in the period of reproduction, and they dissolve as soon as the children no longer need their help. Parents fiercely defend their territories of residence from invasions by neighbors.
The reproductive season occurs during the spring period with some fluctuations linked to the geographical area; in fact, reproduction takes place from March to May in Europe and Africa, from February to June in the British Isles, and between May and July in Scandinavia.
Generally there is a single brood preceded by the construction of the nest that is made by the female alone in the vicinity of streams, under waterfalls, in cracks in walls, in embankments or on a drain pipe, in any case in the immediate vicinity of the water and in a closed place.
The nest has a voluminous and globular appearance and is made with an external part of plant fibers, moss and dead leaves intertwined, with an internal hatching chamber (connected to the outside by a small tunnel) whose bottom is lined with a cup of dry leaves, in which the female lays 3-6 white and shiny eggs.
The hatching period lasts between 15 and 16 days, and is carried out only by the female, while the male guards the territory near the nest and takes care of finding food for himself and for the companion intent on incubating.
At the hatching, the pullets are blind and featherless and are fed and cared for by the mother.
The flight takes place around 12-13 days of life even if they are able to dive just a few days after hatching, but doing so only in case of extreme danger.
After the fledging, the young remain at the nest for another week: at this point, they begin to follow the parents during the search for food, and the male also begins to take part in their breeding, feeding them for another couple of days. weeks, before they permanently move away from their native territory and disperse.

Ecological Role –
Cinclus cinclus are basically solitary birds, with the exception of the mating season, when they live in pairs, and their habitat is connected to fast flowing rivers, on the banks (or on the outcropping boulders) of which it is possible to observe them during the day .
It is an unmistakable species both for its appearance and habits of life and for its liveliness, as even if in activity this bird continues incessantly to “nod” moving its head forward (similarly to pigeons when they walk) and to raise and lower the tail.
They feed mainly on larvae and nymphs of mayflies, stoneflies, black flies and black flies, but these birds feed (especially during the cold months, when insects are less abundant) even small fish and their eggs, aquatic molluscs, tadpoles and small frogs and small crustaceans: although rarely, they can also rummage through the foliage on the ground, looking for small terrestrial invertebrates.
Once the prey has been sighted, these birds suddenly dive into the water or walk until they are completely submerged, remaining in apnea for up to a minute while looking for food, meanwhile using their strong claws to anchor themselves to the seabed while they walk and move the stones and stones. submerged debris to expose the prey, in addition to the muscular wings, used as fins to “fly” under water.
The dipper can stay in the water for a long time thanks to the thick and insulating plumage, constantly impregnated by the bird with the oily secretion from the uropygium to guarantee its impermeability, so much so that the immersed animal (which keeps its head down and tail upwards, with body in oblique position) appears covered by a thin layer of air.
According to the IUCN Red List, Cinclus cinclus is a species of least concern even if the main threats are represented by the transformation of the nesting and feeding habitat. Water pollution. Water collection, overbuilding and river systems (Brichetti & Fracasso 2007).
In Italy it is a protected species in Italy and the possession and sale of individuals not ringed and without a birth certificate in captivity is prohibited.
This bird was named bird of the year 2017 and also represents the national bird of Norway.