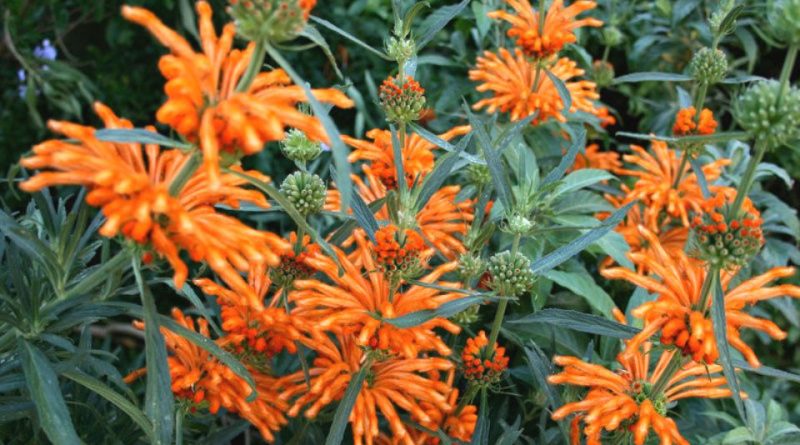 Etymology –
The term Leonotis comes from the Greek λέων léon, lion and from οὖς, ωτόϛ oús, otós ear: due to the supposed similarity of its hairy corolla with the ear of a lion.
The specific epithet nepetifolia comes from Nepeta (name of a plant mentioned by Pliny, perhaps because it comes from Nepi, in Etruria) and from folium leaf: with leaves similar to those of Nepeta.

Geographic Distribution and Habitat –
Leonotis nepetifolia is a plant native to tropical and subtropical East Africa and is widely distributed in the tropics in Africa, Southeast Asia, Pacific Islands, Australia, Central and South America, Southern United States, Mexico and Caribbean islands.
This plant is present all over the world following the European colonial expansion starting from the 17th century.
Its natural habitat is that of mixed woods, along the banks of streams and along the roads but it grows in areas where it has been introduced along the roadsides, in over-exploited pastures, in disturbed sites, in uncultivated areas, in waterways and in the floodplains. It is also found in savanna vegetation near streams in Western Australia. It grows up to 2,000 meters of altitude. 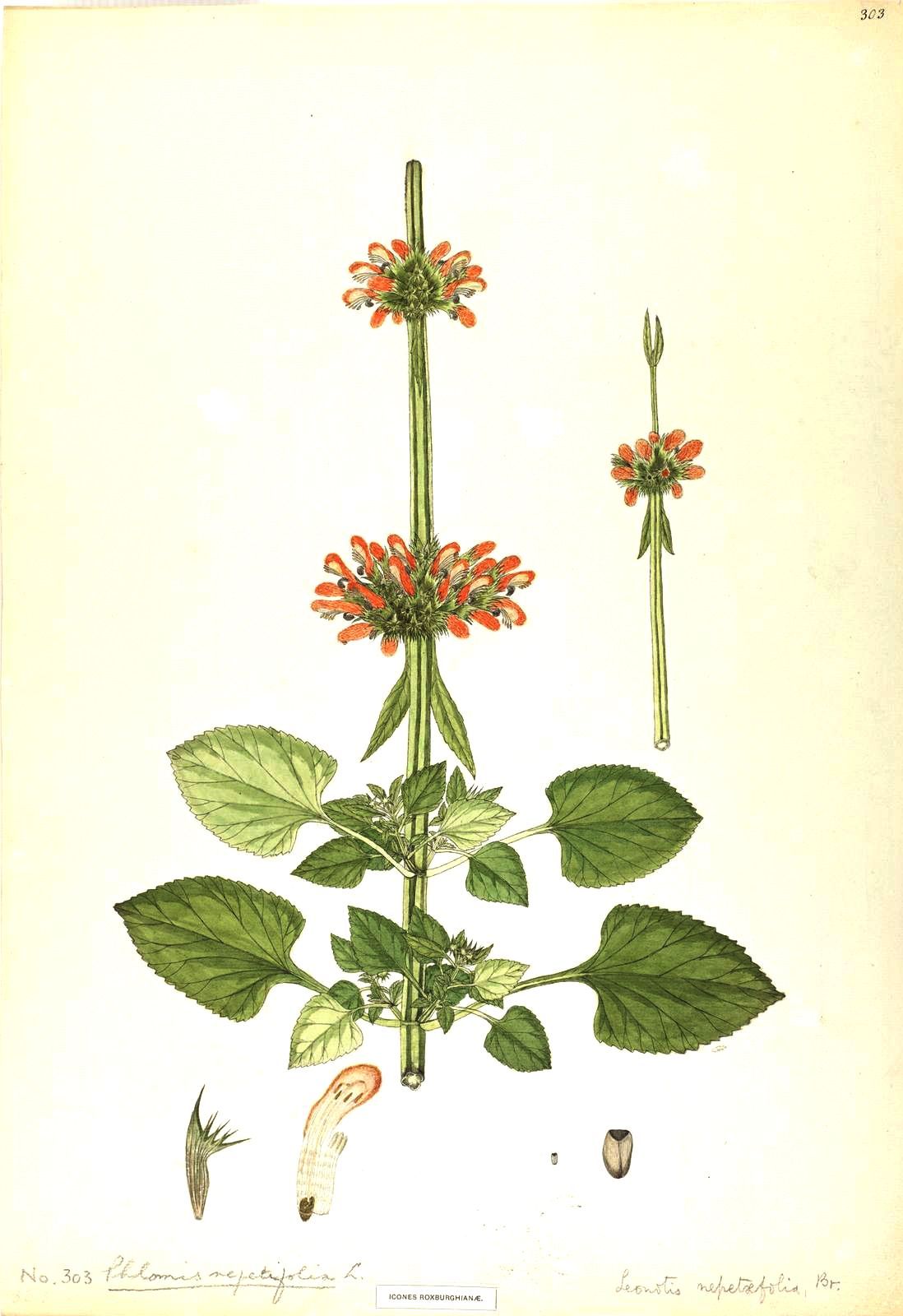 Description –
Leonotis nepetifolia is a perennial and annual herbaceous plant that can reach 3 meters in height.
The stem is branched only at the upper nodes and the plant has an easily extirpable taproot about 10 cm long.
The stems are relatively robust, sparsely branched and sparsely covered with small whitish hairs. These stems are four-angled (i.e. quadrangular) and usually have a distinct groove that runs longitudinally along the center of each side.
The leaves, 4.5-20 cm long and 2-15 cm broad, are arranged opposite along the stems and carried on 2-10 mm long petioles. The lower leaves, which are somewhat egg-shaped in outline (i.e. oblong-ovate or ovate), are larger and wider than those towards the top of the plant. All the leaves have sharply toothed (i.e. crenate or serrated) margins, pointed tips and are sparsely hairy.
The flowers are carried in dense rounded clusters of 5-6 cm in diameter, towards the tops of the stems (usually 2-4 clusters per stem). Each of these clusters is placed directly on the main stem, just above a pair of leaves (ie sessile axillary clusters). The single flowers (20-40 mm long) are orange or reddish-orange in color and tubular in shape with two main lobes (ie they are two-lipped). The lower of these lobes is further divided near its tip, while the upper lobe is somewhat arched or curved and densely hairy. These flowers are surrounded by a 12-15mm long green tube and each flower also has two elongated, pointed green bracts associated with it. Flowering occurs mainly from summer until early winter (i.e. from December to July).
The flower clusters form fruit in the form of hard and somewhat pointed balls when ripe, and consist mainly of the persistent tubes of the calyx (which in fruits widen up to 15-25 mm in length).
Each individual fruit is a four-lobed “capsule” (schizocarp) which separates into four “seeds” when ripe. These “seeds” are dark brown or dull black, and slightly ovoid or triangular in shape (2.5-4.3 mm in length and 1-1.9 mm in width).

Cultivation –
Leonotis nepetifolia is an often invasive plant that grows on the sides of roads, among piles of dirt, or in uncultivated lands.
It tends to form dense thickets and is most abundant in heavily disturbed areas such as roadsides, pastures and river banks. It has the potential to develop into large colonies that displace native species, particularly along river banks and floodplains where the pointed nature of the seed heads reduces accessibility.
The seeds are dispersed in water and mud on vehicles and animals. The plant is deliberately spread as an ornamental and propagates mainly by seed.

Customs and Traditions –
Leonotis nepetifolia is a plant native to the tropical and sub-tropical areas of Africa, India and Latin America but which grows spontaneously in various parts of the world.
The plant is often harvested in its natural state for local use as a food and medicine. It is cultivated as a medicinal plant in India, Malaysia, the Antilles, Brazil and Africa; it is commonly cultivated as an ornamental species.
The dried leaves and flowers of Leonotis nepetifolia contain leonurine, an alkaloid with relaxing and slightly euphoric effects, thanks to which the plant has always been highly regarded in many cultures.
Due to its relaxing and mildly stimulating effects, Leonotis nepetifolia is sometimes associated with cannabis. However, its effects are not that intense. In Mexico, for example, Leonotis nepetifolia is called Mota, just like cannabis.
It is also harvested for edible use and the flowers that are cooked with green leafy vegetables are consumed.
The nectar of the flowers is sucked or licked from the base and has a sweet taste and is usually eaten in small quantities as a snack. It is usually very popular with children.
For medicinal use, the plant is used against swelling, fever, gastrointestinal disorders and as an abortion.
A decoction of the whole plant is used to clean the uterus; treat diarrhea and heavy cramps; as a diuretic; and as a tonic to strengthen the back.
This decoction is used together with a decoction with Heliotropium indicum to treat bedwetting.
The whole plant is boiled with Hyptis pectinata, Mikania micrantha and Momordica charantia and used as a floor cleaner.
The leaves and flowers are cholagogues. An infusion is used as an antidissenteric; a decoction with salt or sugar is also prepared in a preparation to dissolve kidney stones.
An ethanolic extract of the plant showed antitumor and possibly antimicrobial activity.
In Rwanda, the leaves of this plant are used to treat pneumonia, anthrax and syphilis.
Among other uses the seeds are rich in a fatty oil similar to olive oil.

Preparation Method –
From Leonotis nepetifolia decoctions and infusions can be prepared for various treatments in local medicines.
A tea can also be made from the dried leaves and flowers of this plant.
To prepare the tea, add 5 grams of Leonotis nepetifolia leaves to each cup of water. The leaves are left to infuse for a few minutes. To flavor the tea, sugar or honey can be added.