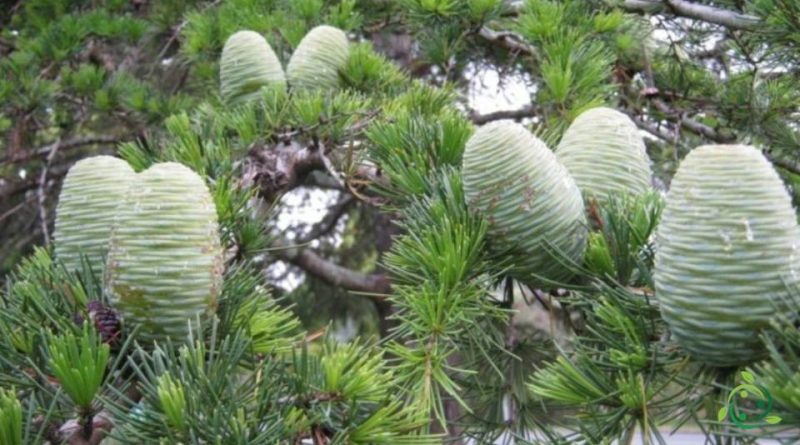 How Himalayan Cedar is grown

The Himalayan cedar (Cedrus deodara (Roxb. Ex (D.Don) G.Don, 1830)) is a species of cedar native to the western side of the Himalayas, widespread in the eastern part of Afghanistan, in northern Pakistan, in Kashmir, in the northwestern states of India, in Tibet and Nepal at altitudes ranging from 1550 to 3200 m of altitude.
This species was introduced to Europe in the early 19th century.
The reproductive structures of this plant are the cones that are produced in autumn: the male ones are 4-7 cm long, first greenish then pinkish brown, while the female ones are smaller and mature in two years, becoming woody and long up to 7- 13 cm, passing from green to brown.
The fruits are red-brown erect cones.

Cultivation –
Himalayan cedar is a plant that propagates by seed by taking the cones in winter and keeping them warm until they open.
Before sowing, a cold stratification of about a month is recommended to increase the percentage of germination.
The seedbed must be kept moist but very well ventilated to prevent the seeds from moldy.
The seedlings should then be repotted as soon as possible and kept in a cold greenhouse sheltered for the first winter.
The planting period is that of late spring or early summer; it is also advisable to provide protection from the cold for the first two winter seasons that the plant spends outdoors.
Another way to proceed in propagation is by vegetative means by taking apical cuttings in November, even if the rooting of these cuttings is often difficult.
It should also be remembered that the Himalayan cedar does not tolerate transplants from a certain age onwards, so this phase should only be performed for young seedlings.
Furthermore, when choosing the positioning of the plant, it is emphasized that Cedrus deodara is not suitable for areas that are too busy and polluted, so it would be better not to plant it in the city, let alone in front of the house.
In general, this plant should be positioned in areas with a lot of space, with a higher elevation and never near roads or walkways.
In the pruning technique this must be done only to remove damaged or dry branches and never prune the lower branches, allowing them to gradually go downwards as the decades pass.
Ultimately it is a plant for large parks, in areas at higher altitudes.

Uses –
Himalayan cedar is a common plant in parks and highly prized for its beauty and majesty.
However, the wood of this plant is less valuable than that of the Atlas cedar.

One thought on “How Himalayan Cedar is grown”