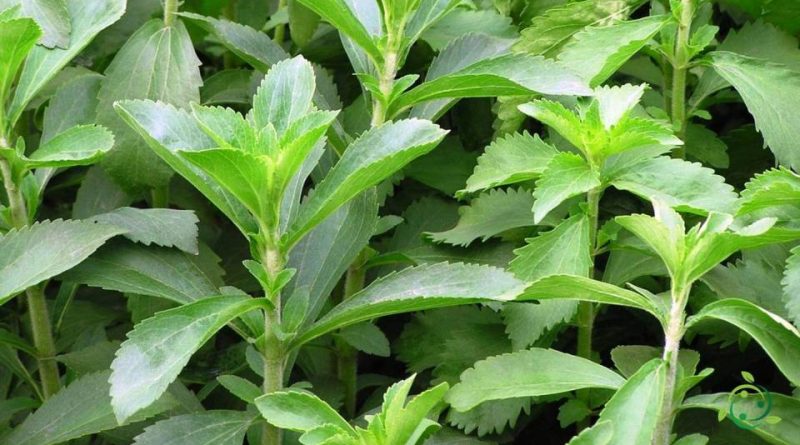 Stevia (Stevia rebaudiana Bertoni) is a herbaceous plant of the Asteraceae family.
This plant is native to the Rio Monday valley in northeastern Paraguay. The first news on the existence of this plant dates back to its use by the indigenous Guaranì who called it caà-ehe (sweet herb) and used it to cover the bitter taste of Ilex paraguayensis with which an infusion called: “Mate “(The Paraguayan tea) slightly exciting for a low caffeine content.
It is known to be used as a natural low calorie sweetener.
This plant usually reproduces by seed, and multiplies by cutting with a good success rate. The seeds are tiny, and before sowing they are usually mixed with sand to avoid too dense distribution. The percentage of germination is modest. It is advisable not to let the soil dry out during germination. The seedlings are transplanted individually when they have placed the second pair of true leaves, planting them outside after the last few frosts, and providing them with some protection until the plant is well underway.

Cultivation –
Stevia is a plant with little need for substrate. It is in fact a plant that, in its natural state, grows on poor, sandy soils, with a superficial water table, above all, in areas such as the edges of swamps and prairies.
Stevia also grows in a wide range of temperatures with an optimum of 23 ° C and resists well to values ​​close to 0 ° C.
As far as soil fertility is concerned, it is a plant that takes advantage of high availability of potassium and nitrogen among the macroelements and for iron and manganese among the microelements.
Normally, for a biomass production of about 7500 kg (about 40-50% of leaves), 180 kg / ha of potassium, 105 kg / ha of nitrogen and 23 kg / ha of phosphorus are removed.
The plant then needs the right humidity conditions after transplanting and before harvesting the leaves. Where the climate allows a second harvest, post-harvest irrigation is essential to encourage the release of shoots. During the dry season it is also necessary to intervene with emergency irrigation.
After obtaining the seedlings, the best period for transplanting (in the Italian territory) falls in the month of April due to the mild temperatures and the frequent rains that ensure good rooting of the seedlings and uniform development.
It is advisable to place the seedlings with a density of 5-6 plants per square meter with an inter-row spacing of 60 cm.
From a nutritional point of view, it is important that the plant has a good supply of elements, as reported above, especially in the 30 days following the transplant and only for nitrogen even close to flowering.
As for the harvest, usually 2 harvests are obtained, the first in July and the second generally more abundant in September-October.