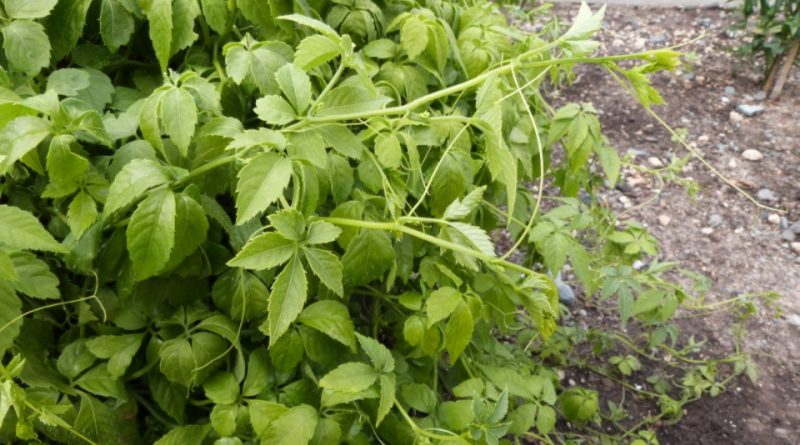 Etymology –
The term Gynostemma comes from the Greek γῠνή gyné woman (and female organs) and from στέμμα stémma corona: reference to the arrangement of the ovules inside the ovary.
The specific epithet pentaphyllum comes from the Greek πέντε pénte cinque and from φύλλον phýllon leaf: with leaves consisting of five leaflets. 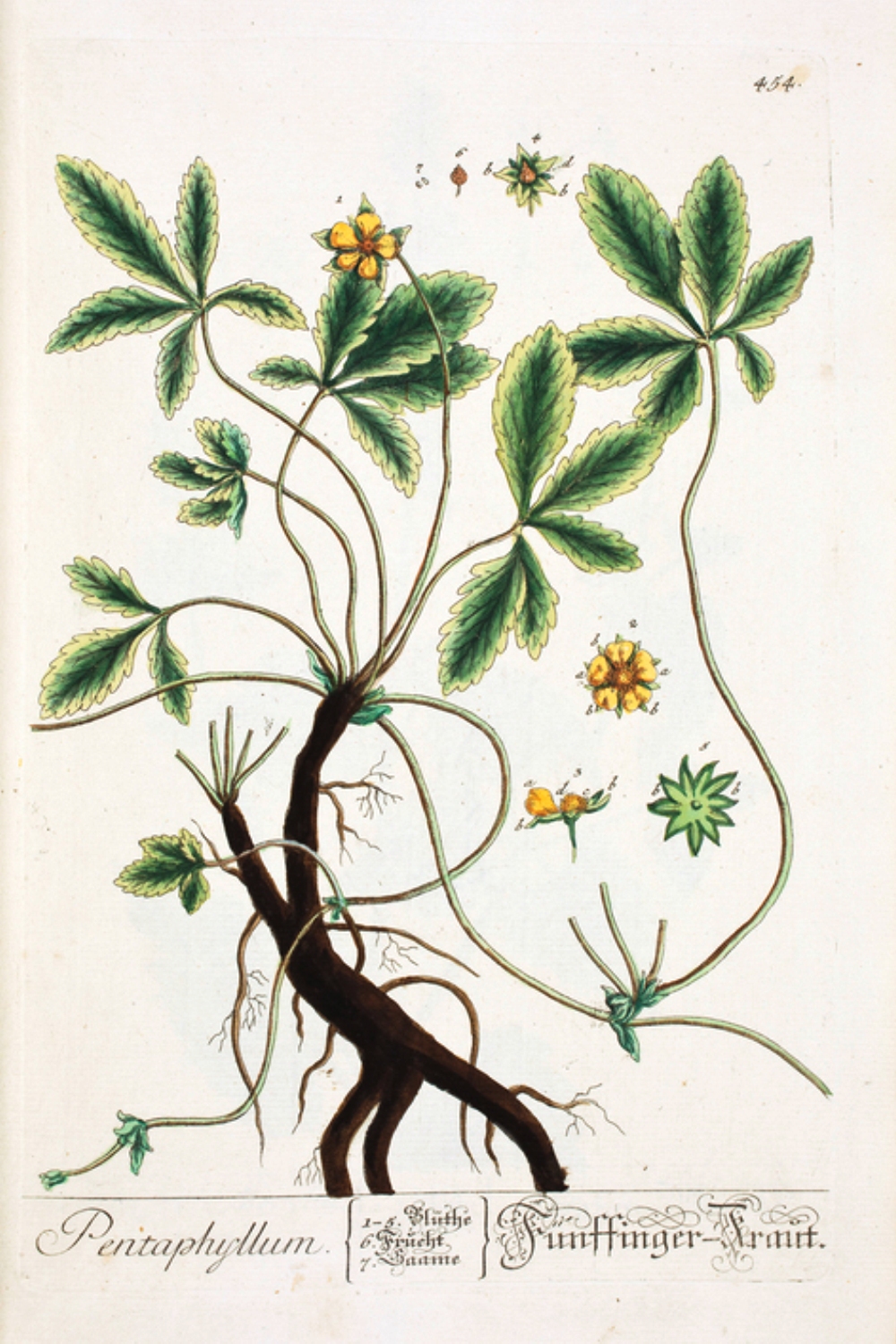 Description –
Gynostemma pentaphyllum is an annual to perennial climbing dioecious plant, which emits stems that climb the ground and surrounding vegetation, attaching themselves by means of tendrils.
The leaves are composed of five leaflets, serrated at the edges and with evident ribs.
The flowers have five yellow-orange petals.
The fruits are small fruits, green in color, grouped in the form of a loose cluster and inedible.

Cultivation –
Gynostemma pentaphyllum is a plant of the lower areas of the warm and tropical temperate zones.
This plant requires rich, well-drained soil that retains moisture and placed in a warm, sheltered location in partial shade.
Plants tend to be annuals or short-lived perennials.
This plant supports itself to other plants or supports by means of tendrils.
If you want to obtain fruits and seeds it is necessary to cultivate both male and female specimens, even if some plants can be monoecious.
Propagation is carried out by seed which is placed for 24 hours in warm water and then sown. Sowing should be done in spring in an organic soil, in a greenhouse, putting 2-3 seeds per pot.
The transplant should be done after the last foreseen frosts, protecting the seedlings until they grow well.

Customs and Traditions –
Gynostemma pentaphyllum is part of traditional Asian medicine and some studies have highlighted its antioxidant, adaptogenic and immune system stimulating power, its ability to regulate cholesterol and high blood pressure, and is supposed to increase longevity.
The plant has been known for centuries for its uses in traditional medicine. It is not well known in China because it grows only in small inaccessible territories, but it is very widespread in Vietnam where it is called the “plant of immortality” and the inhabitants of the Guizhou province regularly consume it in the form of a decoction and have a history of unusual longevity. .
In the European Union, having not yet been studied in depth and regulated, since 2012 it has been included in the list of “Novel Food” for which it is forbidden to sell it as a food product as a precaution (however, it is allowed to be sold in the form of a supplement, dry extract or leaves for infusions).
However, some studies have highlighted its therapeutic potential and it is identified as an adaptogen, that is, capable of counteracting the effects of stressors by helping the body to restore its normal functioning.
The plant is able to increase the expression of superoxide dismutase, an enzyme responsible for eliminating free radicals and with a powerful antioxidant activity; it is also able to increase the activity of the immune system by stimulating macrophages, T lymphocytes and natural-killer cells, acting as an inhibitor of tumor growth. In this sense it has been designed to mitigate the harmful effects of anti-tumor treatments.
The adaptogenic properties seem to be due to some compounds contained in it, such as triterpenoids, saponins, gincosides (also contained in ginseng) which are able to regulate blood pressure, the immune system, improve resistance to fatigue and stress.
In a double-blind study, gipenoside, one of the compounds contained in the plant, was administered to patients with grade 2 hypertension and was able to control the symptoms of the disease in 82% of patients, compared with 46% of patients. ginseng and 93% indapamide (a drug used for hypertension).
The plant, in general, is able to improve heart function even in patients who do not suffer from hypertension, without affecting blood pressure.
Several clinical studies have reported efficacy in reducing cholesterol and triglycerides, the studies report an efficacy between 67% and 93% in the treatment of hyperlipidemia.
It also has a hypoglycemic effect and this property has been studied in the treatment of type 2 diabetes mellitus, where in the form of decoctions of Gynostemma pentaphyllum it has shown efficacy in a double-blind study.
It also has protective properties against the liver, and for this purpose it has been studied as an adjunct treatment in non-alcoholic fatty liver disease.
At a conference on traditional medicines held in Beijing in 1991, it was ranked among the ten most important tonic herbs.
This plant is also used for edible uses, consuming the leaves which have a sweet taste and are used as a tea.
Among other uses, it should be remembered that this plant is used in patented preparations for anti-aging cosmetics and tonics.
As for any toxicity, it should be noted that this plant, unlike some other plants of the same family which contain among other things cucurbitacin which is a very powerful toxin for mammals and responsible for the bitter taste of their fruits such as cucumber, it is not toxic.

Preparation Method –
The leaves of the Gynostemma pentaphyllum are used to prepare a drink similar to tea.
For medicinal uses it is generally consumed as a decoction of leaves but is also commercially available as an alcoholic extract or in dry extract capsules.