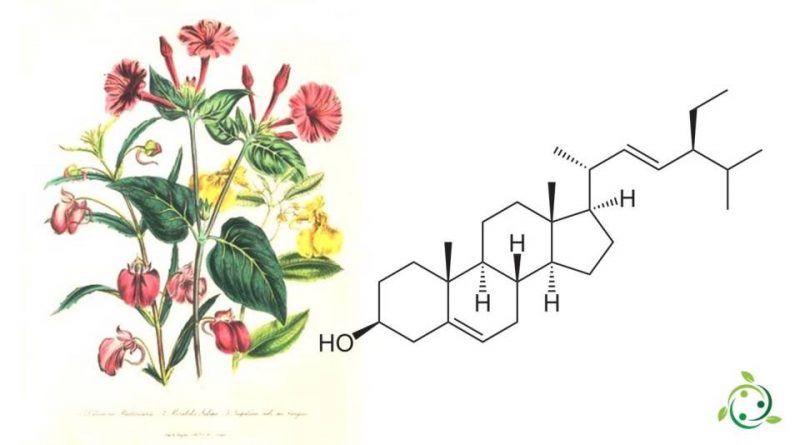 Stigmasterol, whose term in the official IUPAC nomenclature is: (3S, 8S, 9S, 10R, 13R, 14S, 17R) -17 – [(E, 2R, 5S) -5-ethyl-6-methilept-3-en -2-yl] -10,13-dimethyl- 2,3,4,7,8,9,11,12,14,15,16,17-dodecahydro-1H-cyclopenta [a] phenanthren-3-ol, is a sterol of plant origin.
This substance, also known as stigmasterin, has a brute or molecular formula: C29H48O.
This molecule was discovered in the mid-twentieth century by the physiologist of the University of California Rosalind Wulzen and isolated in 1906 from an oily mixture extracted from the Calabar bean (Physostigma venenosum Balf., 1861).
Stigmasterol is among the most abundant plant sterols, having an important function in maintaining the structure and physiology of cell membranes.
Stigmasterol is an unsaturated phytosterol present in vegetable fats or in the oils of numerous plants, such as soy, calabar bean and rapeseed; it is also present in some herbs used in herbal medicine practices, including Chinese herbs such as Mai men dong (Ophiopogon japonicus (Thunb.) Ker Gawl.) and night beauty (Mirabilis jalapa, L. 1753).
Stigmasterol is also a constituent of various vegetables, legumes, nuts, seeds and unpasteurized milk. Pasteurization deactivates the stigmasterol.

Edible oils contain larger amounts than vegetables.
In the European Union, it is a food additive listed under the E number E499 and can be used in food production to increase phytosterol content, potentially lowering LDL cholesterol levels.
As one of the main phytosterols, stigmasterol is included among the sterol compounds in the diet which can potentially reduce the risk of cardiovascular disease.
The consumption of 2 grams per day of plant sterols is associated with an 8-10% reduction in LDL cholesterol in the blood, with a possible reduction in the risk of cardiovascular disease.
Stigmasterol, in plant cell processes, may play a role in plant stress responses, metabolism and enzymes involved in the biosynthesis of plant cell membranes.
Stigmasterol has also been shown to exert anti-angiogenic and anti-cancer effects through the downregulation of TNF-alpha and VEGFR-2.
Stigmasterol, being a steroid, is the precursor to the anabolic steroid boldenone. Boldenone undecylenate is commonly used in veterinary medicine to induce growth in cattle, but it is also one of the most commonly abused anabolic steroids in sports. This has led to suspicion that some athletes who tested positive for boldenone were not consuming the steroid itself, but rather consuming foods rich in sterol stigma.